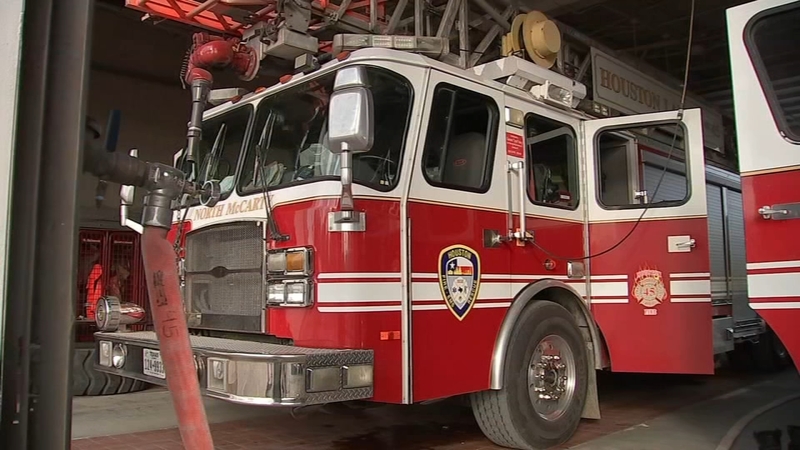 HOUSTON, Texas (KTRK) -- On the hottest week of the year, the fire union president is calling on Mayor Sylvester Turner and Houston City Council to repair two dozen Houston fire trucks with no working air conditioning.

Monday afternoon, Lancton had a running list of about 24 trucks city-wide with no A/C.

SEE ALSO: Firefighters and city to return to court to wrestle over Prop B

To prove the point of how hot the trucks are, firefighters shared photos of temperatures on social media reading 100, 105, and 107 degrees taken by thermal imaging cameras inside ladder and engine trucks.

That's without 50 pounds of gear and not on a fire scene.

"We're warning citizens to stay out of the heat, and they should, but we're not even looking at the men and women who are responding to emergencies," Lancton said.

Monday, Lancton sent a letter to Mayor Turner, HFD Chief Samuel Peña and Houston City Council members saying the condition of the trucks present health and safety issues for firefighters in their gear, and asking them to address the "continuing decline of the HFD fleet."

In response, Peña said health and safety is a high priority. The city is working with outside vendors to make repairs as soon as possible, and "any air conditioning unit not working in an extreme heat advisory is one too many," he wrote in a statement.

The mayor's office referred ABC13 to Chief Peña's statement:
The health and safety of our firefighters is our primary concern. Maintaining functioning Air Conditioning on fire apparatus during the peak summer season is a challenge, but it is considered a high priority.

Due to the extreme firefighting conditions in the Houston summer climate, we have taken certain heat stress prevention actions during the summer months, including staffing a second rehabilitation unit, and encouraging Incident Commanders to call for additional resources early in the incident to ensure proper rotation of crews.

We are working with City of Houston Fleet services who has contracted with 2 outside vendors in addition to the City Maintenance facility and are working evenings and weekends to make AC repairs as parts become available and keep up with service demand.
In addition, an aggressive vehicle replacement strategy has been implemented in the last two years. During this administration the FY capital budget was increased to $10,800,000.00 from $5,535,838.

These are steps in the right direction as we work to address years of inattention to fire apparatus replacement. Although the number of heat related injuries has declined from 62 incidents in FY18 to 33 in FY19, we acknowledge that any heat related emergency to our personnel and any air conditioning unit not working while in an extreme heat advisory is one too many.