KTRK
By Ted Oberg
HOUSTON, Texas (KTRK) -- Three hundred and seventy-five Houston firefighters could soon be out of a job as Mayor Sylvester Turner looks for ways to pay for pay raises mandated by Prop B, the pay parity plan Houston voters approved in November.

News of the potential layoffs came just a week after Turner's office released details of ongoing settlement negotiations with the firefighters union. A negotiated deal could save some of those jobs.

Earlier this week on Houston Public Radio, Turner told listeners he didn't want to lay off anyone to do it, but firefighters rejected his five-year plan.

On HPR's Houston Matters show, Turner said, "Many firefighters will get a healthy pay raise, but many firefighters and municipal workers will lose their job because there is only so much money to dole out... I don't want to layoff anyone, that's why I asked firefighters, the union, to phase in Proposition B over a five-year period to avoid these layoffs... that proposal to phase it in over five years was rejected." 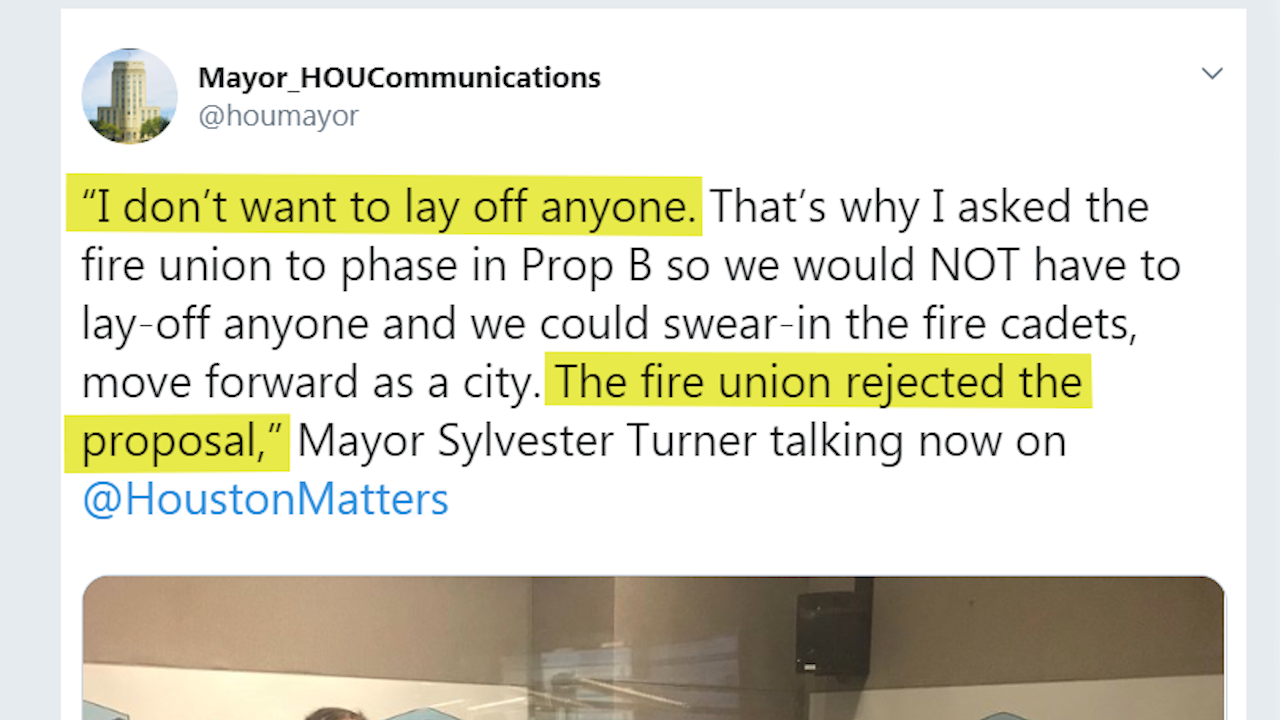 When 13 Investigates looked closer at the deal the mayor offered, it doesn't appear there was ever a detailed plan from the mayor to the union and much of what the mayor released confused firefighters.

Local 341 Firefighter Union President Marty Lancton told 13 Investigates, "It's a categorical lie...he has provided no proposal to implement the will of the voters and Proposition B."

Lancton says the documents are thin on detail and the union can't determine what they're based on.

One chart released to reporters by the mayor's office on March 1 shows a five-year plan to increase salaries by 23 percent. 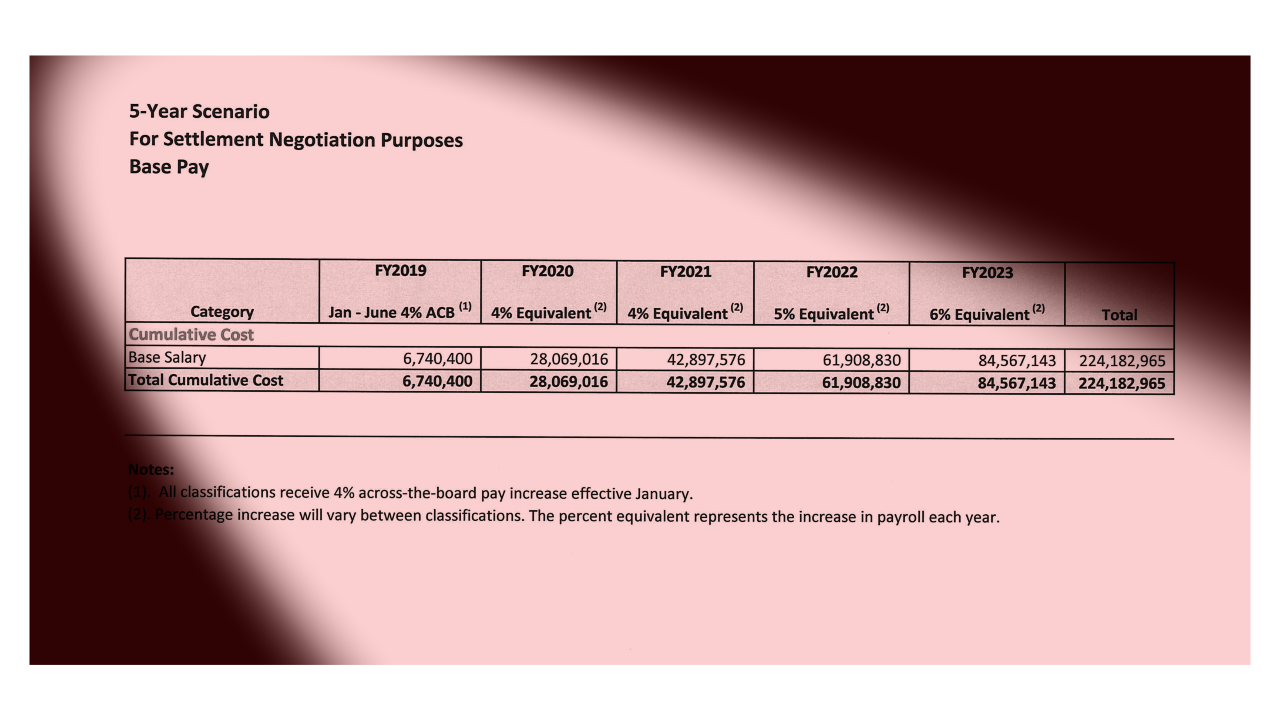 Lancton, the union chief, says he'd never seen the chart before 13 Investigates shared it with him. Lancton added he can't even figure out what the percentages are based on. The mayor's office wouldn't agree to a meeting with us on or off camera to answer any of our questions.

Another email released on March 1 from the mayor's office shows the city offered firefighters a 24 percent pay raise over five years, but the numbers don't appear to line up with actual salary data 13 Investigates reviewed in both the city budget and payroll documents. 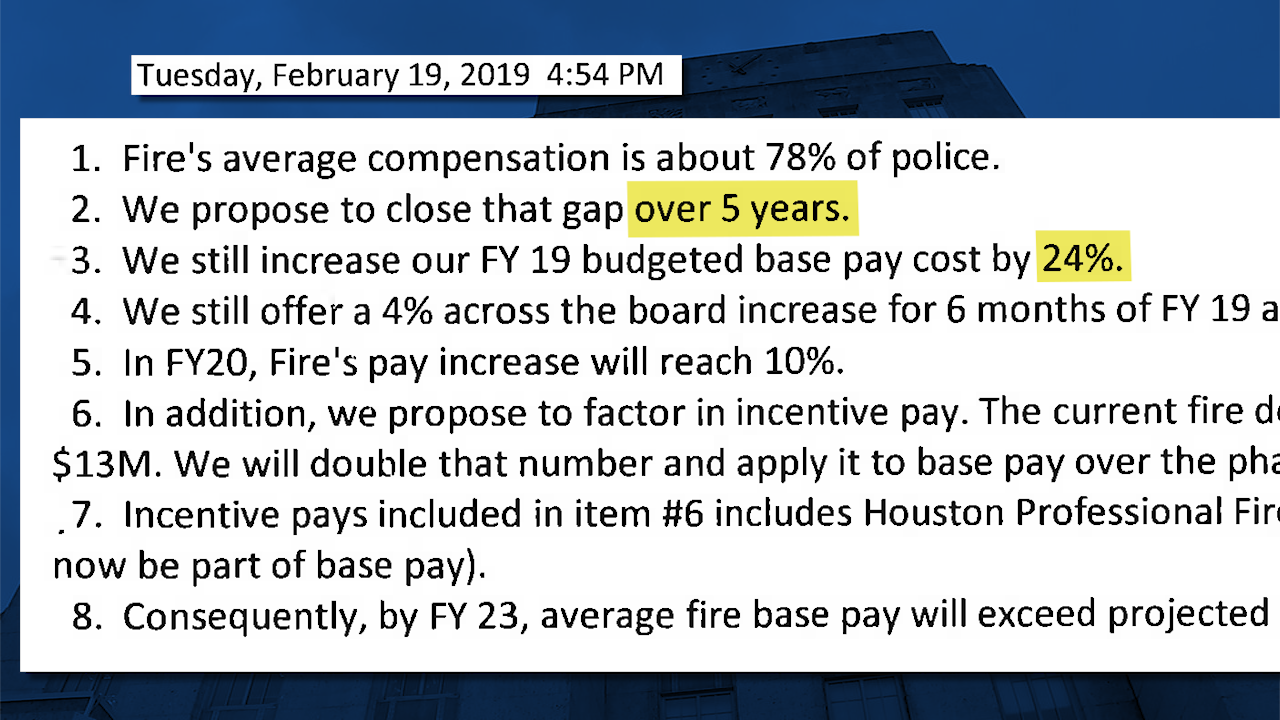 After the city released what the city labels 'Settlement Offers,' the union also shared once-confidential emails to 13 Investigates. Those documents make clear the biggest hurdle appears to be the city's reluctance to release financial data used to determine parity.

In emails released by the union, the firefighters' attorney asks for information on exactly how much police officers make in incentive pay on Feb. 8, 11 and 14. The union says the data was never sent. It was not contained in any email released by the city. 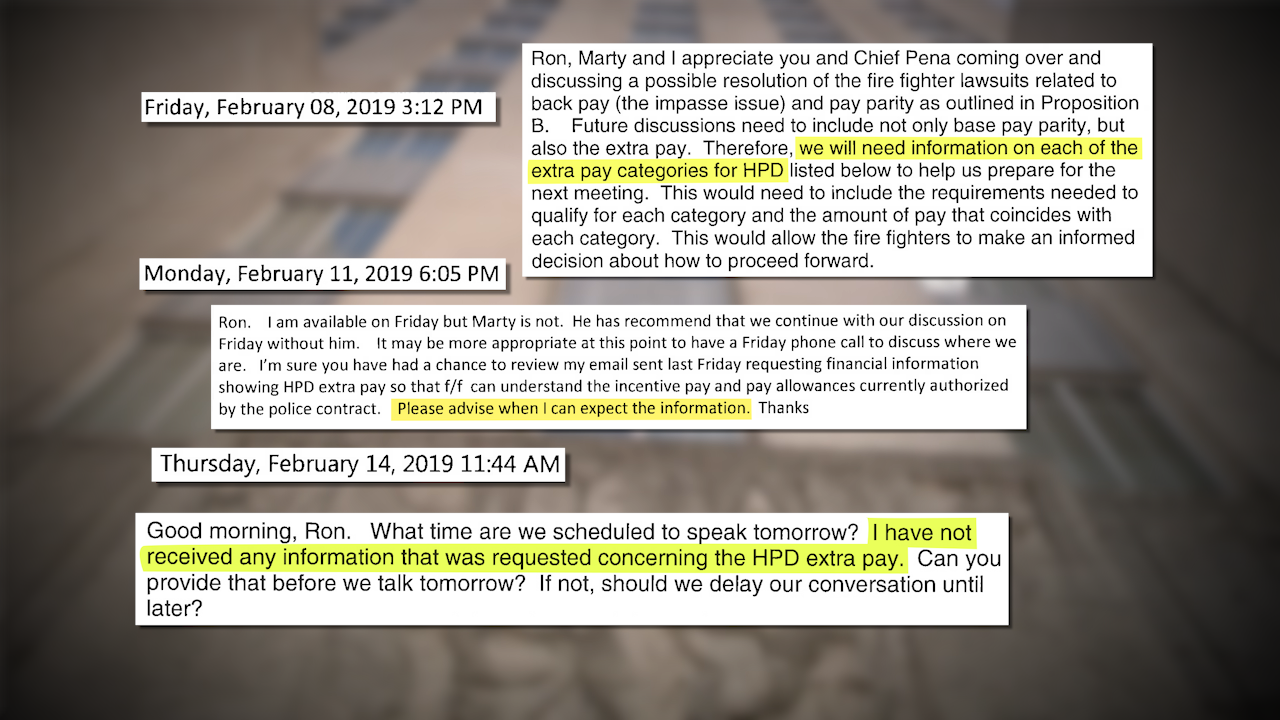 "How can you ask somebody to weigh up whether or not you're willing to do something if the city has not provided any of the data?" Lancton asked. "No financial data, no financial information, no way to look at it objectively."

This part of the debate boils down to the many ways police officers earn money from the city.

Pay by rank is easy to understand. An entry level police officer equates to an entry level firefighter. A police sergeant is a fire captain and so on. 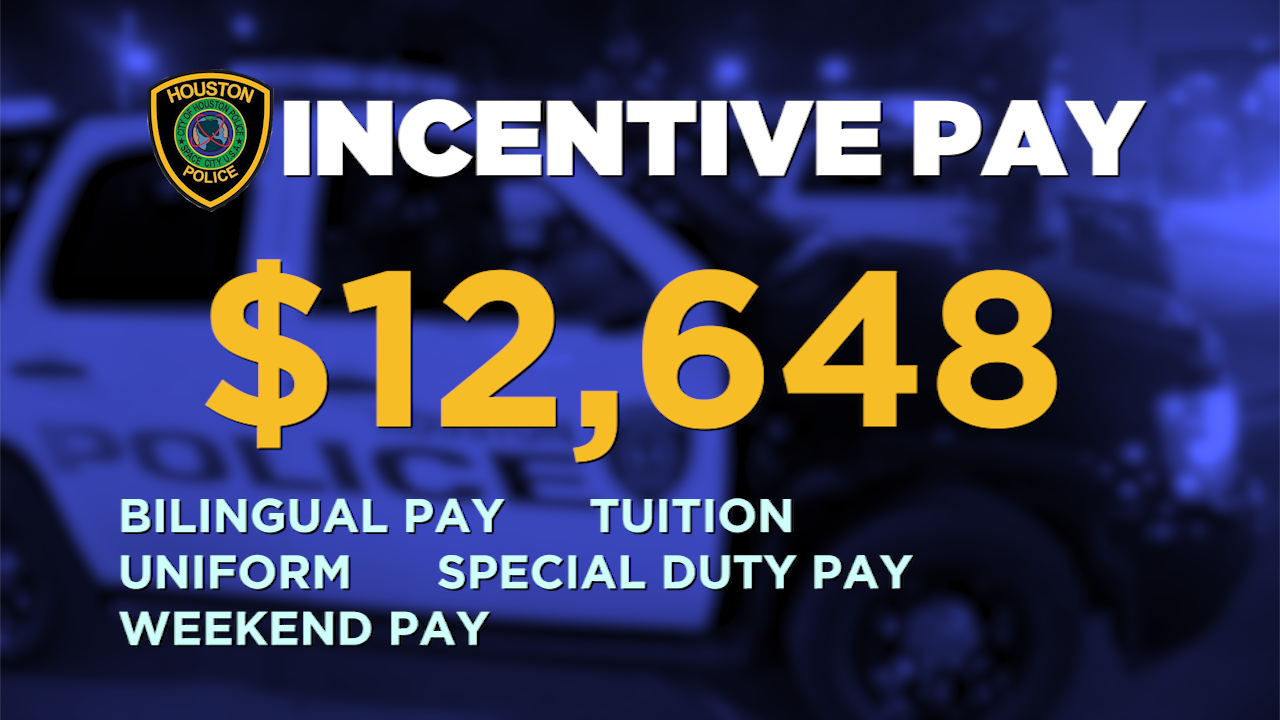 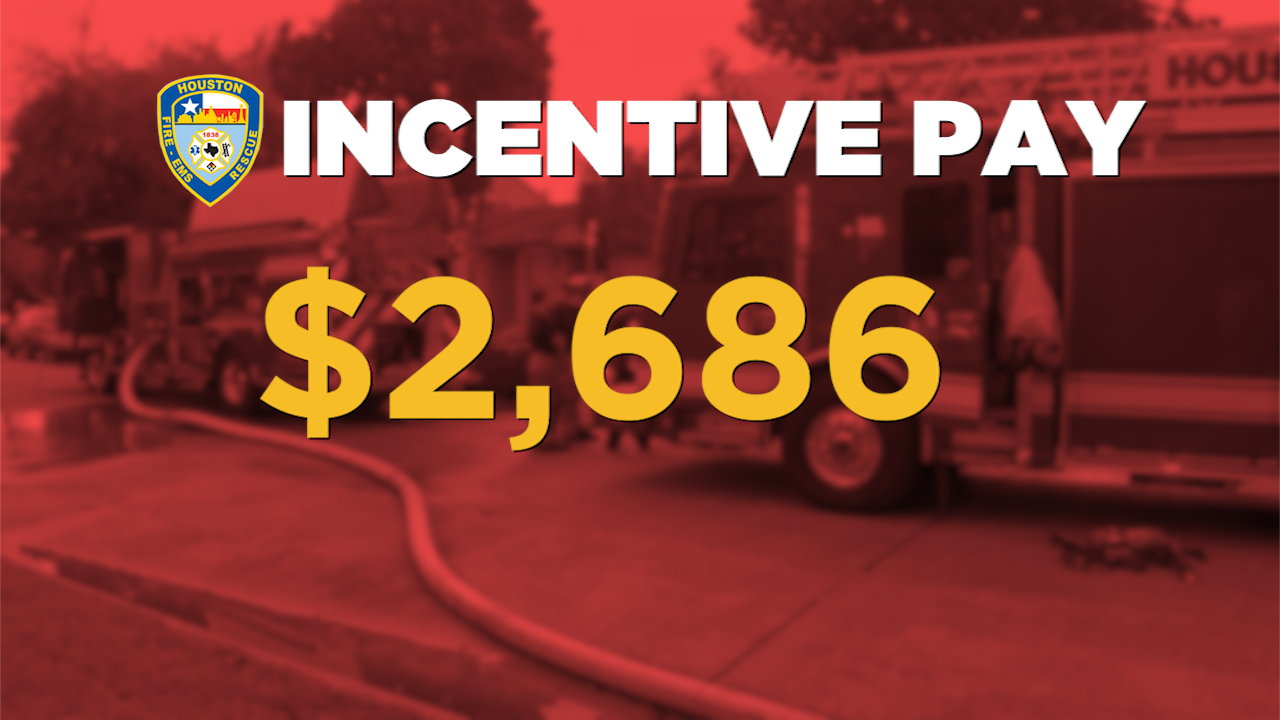 Firefighters have far fewer incentives and earn just $2,686 on average in annual incentives. It explains why firefighters want the financial data to make sure the parity voters approved means equality in pay. The ballot measure lays all of it out in excruciating detail, but little of the incentive pay issues appear in the offer the mayor keeps referring to.

A footnote in a Feb. 19 email from Houston City attorney Ron Lewis to union attorney Troy Blakeney says, "We (the city) propose to factor in incentive pay. The current fire department budget for special pays is around $13M. We will double that number and apply it to base pay over the phase in period."

Later in the footnotes, the city attorney writes, "The budget of $13M will not charge or be reduced to fund the base pay bump above." As noted above, even with that factored in, the numbers don't appear to match existing salary data.

A three-year firefighter union proposal is only slightly more detailed, but backdates raises to before Prop B was approved. The firefighters' union says it did not receive a response on that proposal.

NO ANSWER FROM CITY TO ABC13

All of this would be so much clearer if the city would answer any questions about the status of the plan or the documents the mayor's office themselves released. 13 Investigates asked twice for a meeting, one of them included an offer for a background Q & A off camera. The city refused both times.