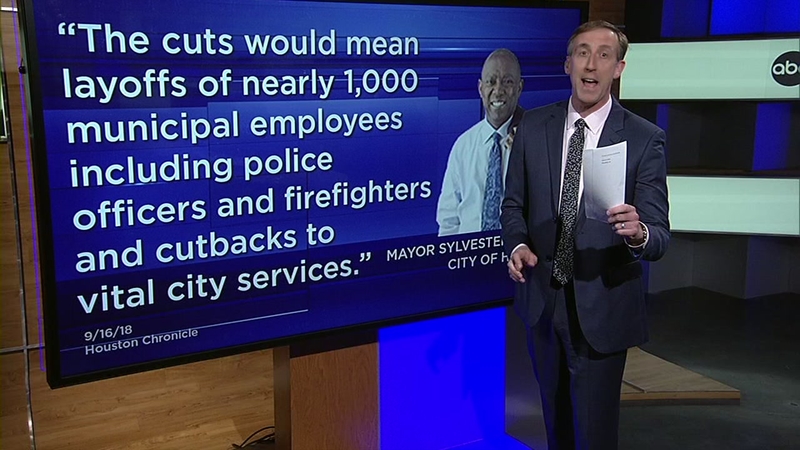 HOUSTON, Texas (KTRK) -- Houston's firefighter union says a public meeting with Mayor Sylvester Turner is a political move, not a practical one.

After a public promise to meet with firefighters, Turner sent the union a letter Wednesday inviting them to city hall next week for a "public opportunity to find a solution."

The meeting would be at least partially open to the media, a Turner spokesperson said.

In that letter, Turner reiterated his points against Proposition B and raised the possibility that layoffs might be avoided. The meeting was set for next Wednesday at 2 p.m., but didn't specify exactly where. The location was still being worked out, the spokesperson said.

The union called the letter "vague."

One council member has taken Turner up on the request, suggesting a garbage fee between $25 and $40 a month. That suggestion, brought up by council member Dwight Boykins, was rejected by Turner. Houston is the only city in Texas without a garbage fee.

Turner estimated the cost to the city to be $100 million each year if Prop B passed. City Controller Chris Brown reached a similar number.

Despite Turner's dire warnings of mass layoffs and a financial crisis, voters approved Prop B by 59 percent to 41 percent.

At least one credit agency dropped Houston's credit outlook after the passage of Prop B. In a news release, Fitch said it moved the outlook from stable to negative because of the additional costs, but said Houston's long-term outlook remained positive. Fitch praised Turner's administration for its budget strategy and management.

"If the sacrifice of city services and city employees and their families in order to finance your pay increase can be avoided, I am open to consideration of your ideas," Turner wrote.

But the president of the Houston Professional Fire Fighter's Association says this is the first response he's gotten to several letters he sent to Turner about Prop B.

In a Jan. 2 letter sent after Turner said he would meet with firefighters, union president Marty Lancton asked Turner to "avoid organizing more stage-managed, taxpayer-funded town hall meetings" and instead asked Turner to sit down at the negotiating table to work out a deal.

"We encourage you, as the city's chief executive, to work with us to sensibly implement Prop B," Lancton wrote.

The union's tone shifted drastically in a letter sent Wednesday before Turner suggested the meeting. That letter, written by the union's attorneys, asked plainly when the city would start the pay increase. It threatened legal action if the city didn't reply.

Lancton sent his own letter, responding to Turner that didn't outright rule out meeting with him next week, but urging a private one-on-one.

Turner has called a special finance meeting of the city council to address how to pay for the measure and while the campaign for and against Prop B waged for months, at the end of the year, Turner said they had done little work to prepare for the implementation of Prop B.