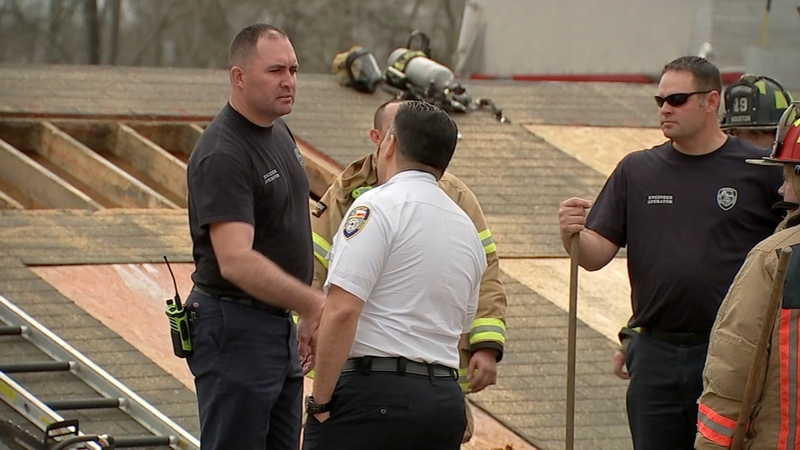 'The firefighters of Houston have suffered enough:' HFD letter

HOUSTON, Texas (KTRK) -- What little goodwill existed between rank and file leaders of the Houston Fire Department and its chief after months of acrimony appears to be evaporating. In a letter to the fire union president released Tuesday, 95 of the department's 105 front line district chiefs are asking to schedule a 'no-confidence' vote in Houston Fire Chief Sam Pena at the union's next meeting.

The vote has not yet been scheduled as the union works through policies and procedures, but will likely be held by the end of the week. When it is held, such a vote would not require action by Houston Mayor Sylvester Turner, who alone hires and fires department heads, including the fire and police chiefs.

Tuesday afternoon, Turner said in a statement, "I have every confidence in Chief Sam Pena. Not only is he doing a great job for the Houston Fire Department, but he is also doing an excellent job for the City of Houston. What the union is doing is 100% political and I am certain that the public will see it for what it is."

Davis stood side-by-side with dozens of district chiefs who all said they signed the letter asking for the vote. When asked what he wants Pena to change, Davis and fellow district chief Chris Chavez complained of a lack of resources, low pay, high cancer rates, a lack of training, poor maintenance on fire trucks and an increasing number of firefighters leaving the department well short of retirement.

"It's nothing he doesn't know," Davis concluded, "We've told him we've had a committee, we just want the best for the citizens of Houston."

Pena turned down an interview request from ABC13, but told us in a statement he considers it an "honor to lead the Houston Fire Department. I have extended the union an open door policy and access in hopes of working together to address the challenges of operating a large department. The continued strategy to discount and discredit the positive work this administration has done is divisive and unnecessary."

In their letter, the district chiefs complain of budget cuts, schedule change "threats," low pay and broken down trucks. "The citizens of Houston have suffered enough," the letter states.

It goes on, "The firefighters have been without a collective bargaining contract for over two years. The mayor and fire chief have blamed, ridiculed and threatened the firefighters during this time, but the firefighters have continued to show up to work and do the best they can. HFD members currently have the highest rate of active cancer patients that we have ever seen, with no end and no plan in sight. The firefighters of Houston have suffered enough."

For those following the bitterness between firefighters and city hall, the move is not likely a surprise. Firefighters have not had a contract for years and this year, failed twice trying to mediate an end to the drawn-out fight over the Prop B pay parity proposal.

The letter, which gathered more support Tuesday afternoon, concludes, "We no longer believe Chief Pena can effectively lead the men and women of the Houston Fire Department."

Some of Mayor Turner's mayoral opponents piled on. Tony Buzbee told ABC13, "I've had no confidence in him for months now. We need to promote from within the ranks and work to restore morale within the department." Sue Lovell, who has worked with the fire union as a lobbyist in the past told ABC13," I think the district's chiefs are showing leadership and doing what they always do which is protect the citizens of this city at all cost."

Turner appointed Pena to the job. Prior to coming to Houston, Pena was the chief of the El Paso Fire Department.

"I took an oath to faithfully execute the duties of this office. I love this profession and consider it an honor to lead the Houston Fire Department and the hardworking men and women who have dedicated themselves to the safety of our community.

Since day one of my appointment, I have extended the union an open door policy and access in hopes of working together to address the challenges of operating a large department.

The continued strategy to discount and discredit the positive work this administration has done is divisive and unnecessary. I know that at the core of their discontent is the union's inability to negotiate a contract for its members.

Our firefighters and the community deserve to have the best equipment and materials we can afford and I stand by our work and the significant progress we've made in the last two years in addressing the state of the fleet, firefighter cancer prevention initiatives, and flood response equipment and training.

My focus will remain on working to resolve the challenges we face. The City of Houston deserves nothing less than a professional Fire Department ready to preserve the public safety and care for the most vulnerable in our community."

The last 'no-confidence' vote against a Houston fire chief was in 2002. Then-chief Chris Connealy was facing criticism over staffing following a firefighter death.

RELATED STORIES
City of Houston sends layoff notices to 66 fire cadets
Mayor Turner says Prop B is cheaper, can be implemented faster, but union calls it short on detail and 'improper'