KTRK
By Ted Oberg
HOUSTON, Texas (KTRK) -- It didn't take long for Houston's city council to delay a vote on potential firefighter layoffs Wednesday. With one word, Councilman Dwight Boykins moved it to next week. There was no discussion until council members' personal time at the end of the meeting.

Council members Brenda Stardig and Dr. Steve Le both pushed Mayor Sylvester Turner to bring in a mediator, with Stardig suggesting, "We need to bring these two sides together."

Turner said no. "I am not doing anything to delay this process further."

It sets up a vote on layoffs for next Wednesday that, barring unforeseen changes, cannot be delayed.

As council adjourned for the week, dozens of Houston firefighters and cadets packed the firefighters' union hall for a job fair. Fire departments from Katy, Baytown, Texas City and College Station, among others, collected resumes. Most recruiters are telling Houston-trained firefighters, "We're hiring right now."

Houston firefighter Marcus Romero was among them. With three years on the job, Romero tells ABC13 he wants to make sure he has "a Plan B."

Romero grew up visiting Houston's Station 8 and still dreams of a 30-year career in Houston. Handing out his resume to other departments, he told ABC13, "Hurts us, growing up as kids, wanting to be a part of the Houston Fire Department, the pinnacle of the best departments out there in the states, and now doing this (looking for other jobs just in case)."

It was timing not likely lost on the union's leadership, which continues to ask for details on how Mayor Turner plans to implement the voter-approved Prop B pay raise plan. Prop B insists firefighters be paid the same as police officers in Houston.

The sticking point for months has been the thousands of dollars police officers earn in incentive pay for everything from equipment to tuition, training to working weekends.

In other words, what will Marcus (or any other firefighter) be paid under the mayor's Prop B plan?

Without those details, it would be impossible for any firefighter to determine how much they would earn under the mayor's Prop B plan he continues to insist is a good deal for firefighters and the city.

The city had turned over total numbers in the past, but the union and its members wanted to know who would be paid what. 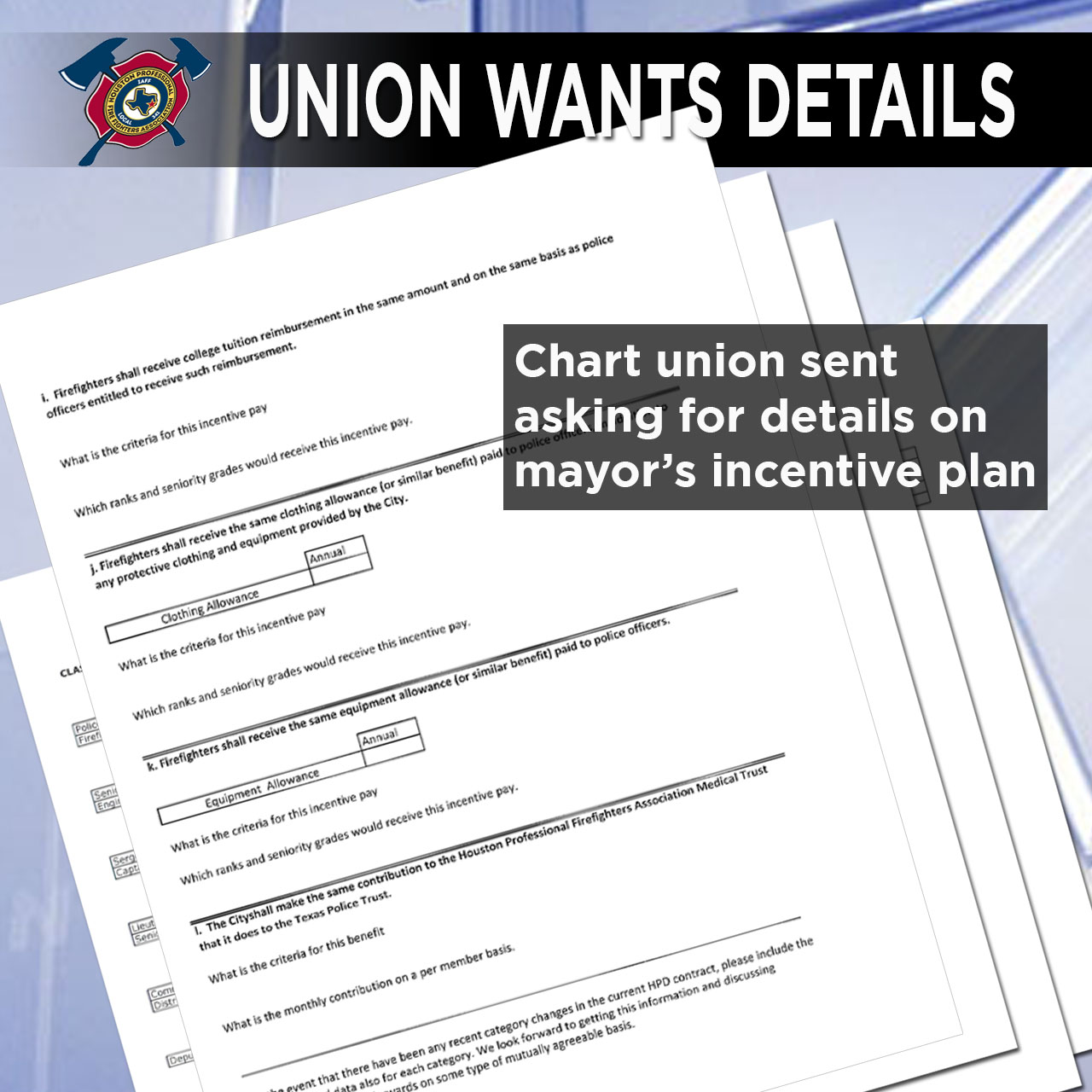 Monday, Mayor Turner pledged to turn over information but would not fill out the union's chart, telling reporters at City Hall, "We have provided financial information. I'm not dealing with charts."

The information he turned over did include base pay, but few details on incentives beyond totals the city has shared previously. 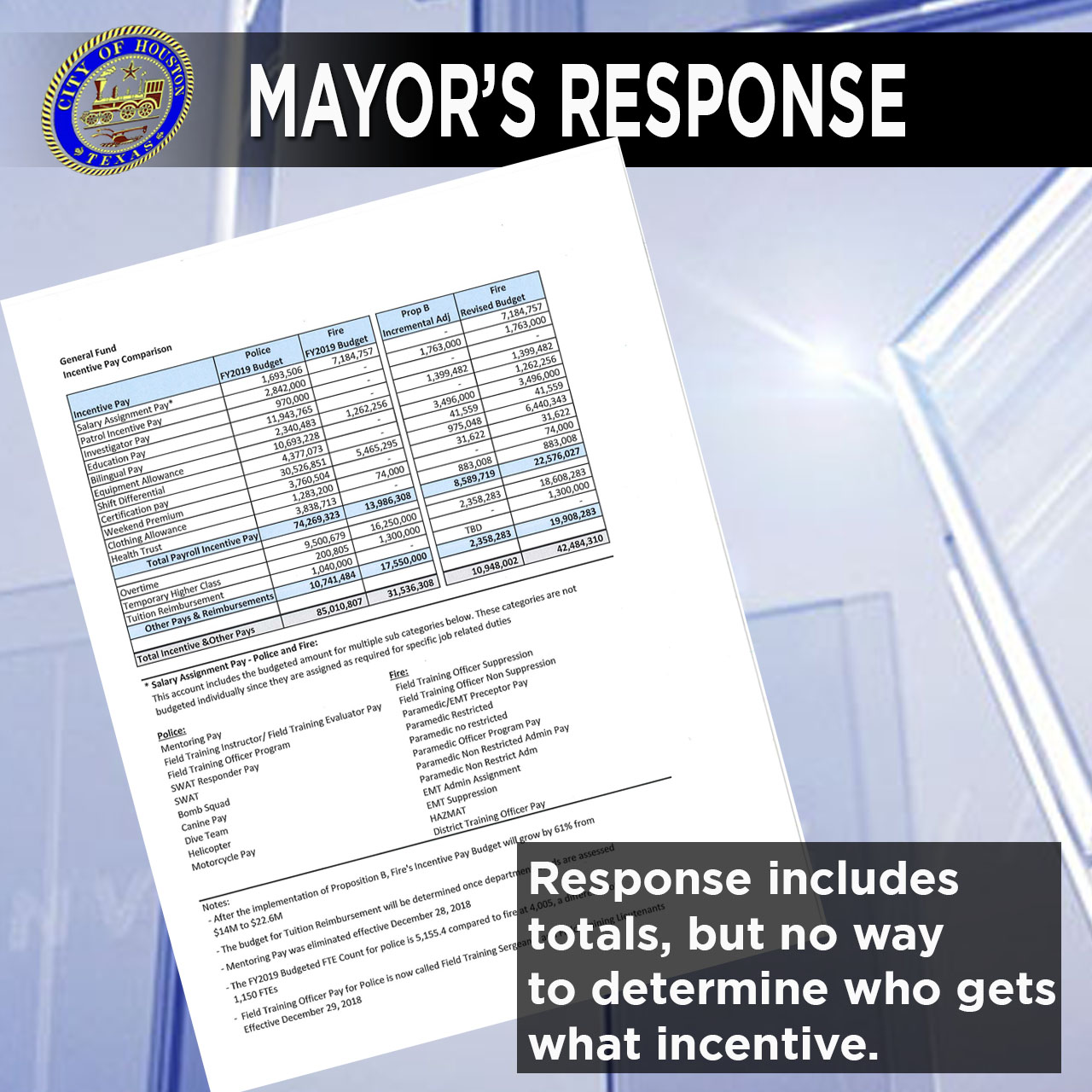 It wasn't the only information the mayor turned over Wednesday. On April 4, City Controller Chris Brown - the city's elected financial watchdog - asked the mayor several questions about Turner's proposed Prop B implementation. At the time, Brown hinted that he may not be able to sign off on the city's upcoming budget without understanding the mayor's plan.

Wednesday afternoon, Turner's finance and legal chiefs answered the questions. Turner says 730 current firefighters would receive no pay increase under Prop B. According to his administration's letter, Mayor Turner eliminated Field Training and Mentoring Pay based on new titles for those categories in the recently adopted Houston Police contract.

Police officers earned a combined $1.1 million in these incentives last year. The ballot measure approved by voters last November suggested such a name change would not change the parity provision.

Turner appears to eliminate incentives for firefighters who achieve training certifications. City payroll records show those incentives were worth $27 million for police officers in the last fiscal year. Turner's response to the controller also shows firefighters would be ineligible for any parity equivalent on what the police department calls 'patrol pay.' Again, city payroll records show police officers earned $2.2 million under that incentive.

Controller Brown thanked the mayor for "some clarity," but needs more. In a statement to ABC13, Brown said, "We appreciate the administration's response to our memo and it does provide some clarity on the proposal. That said, additional clarification is needed to explain the true costs of the implementation of parity. We will continue to work with the administration to get that information. It's important that we have a full understanding of the costs of implementation heading into the upcoming budget cycle."

There is no currently scheduled meeting between Mayor Turner and the firefighters.