The leaked documents originated in the city's Finance Department and lay out everything from annual base pay increases and more than a dozen other categories of special pay.

The documents show the city is at least proposing to completely cut five categories of incentive pay for firefighters. Police officers were paid more than $4 million last year in those categories alone. The plan also dramatically discounts firefighter incentives in several other categories.

The leaked documents were never turned over to the fire union by the city, nor were they given to 13 Investigates despite repeated requests for information on the mayor's plan. As it sits now, all the public and thousands of firefighters know of the mayor's plan is a few lines on a chart extending years into the future.

The leaked documents came to 13 Investigates just hours before the city told more than 60 fire cadets they would be laid off this summer. A vote is scheduled for April 17, when city council will be asked to approve hundreds more sworn firefighter layoffs.

Houston Mayor Sylvester Turner often says a deal to phase in the costs of voter-approved pay parity raises would save jobs. He has repeatedly asked, "Why won't the union phased this in over five years and avoid all of these layoffs?" 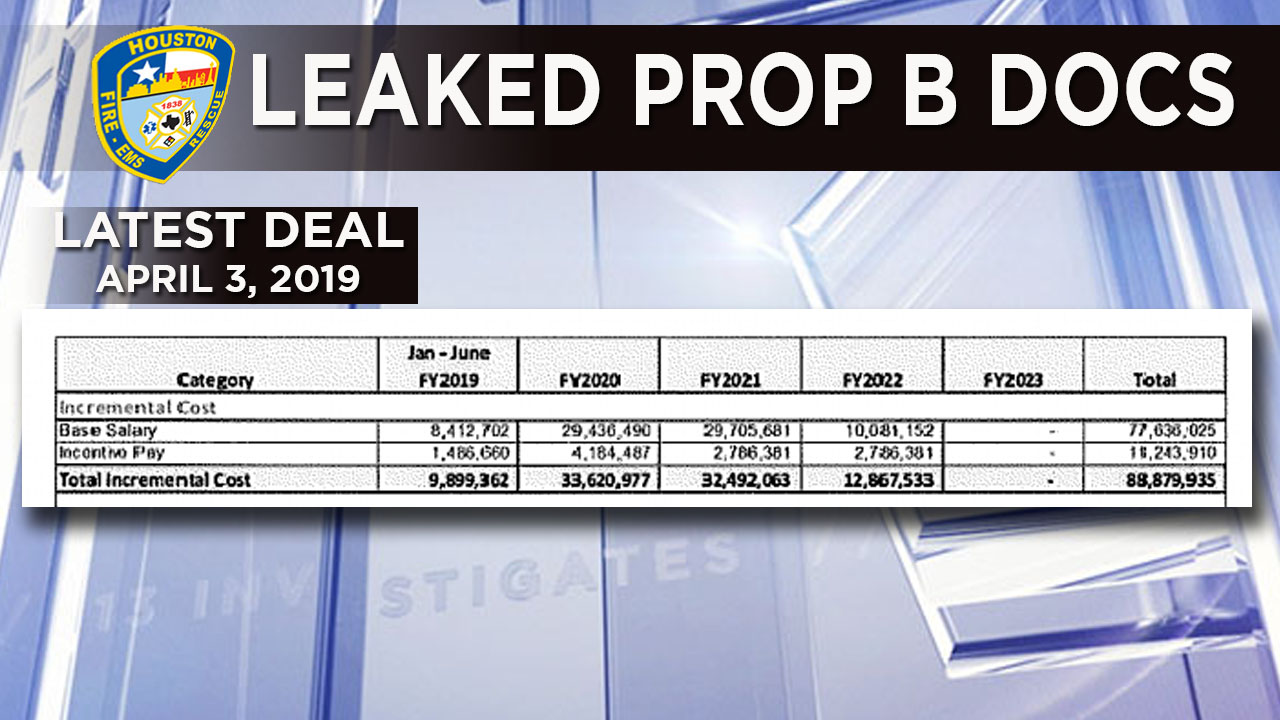 The fire union has repeatedly asked for the underlying data to tell members how much they would get under the mayor's plan. The mayor says the union has "quite a bit of data."

The union says it had never seen the details in the leaked documents.

SEE ALSO: Mayor Turner says Prop B is cheaper, can be implemented faster

As he mulled over the newly-leaked details, Firefighters' Union President Marty Lancton told 13 Investigates, "These secret documents that we have obtained show exactly what the firefighters have been worried about."

The first concern is that documents show base pay raises for 700 fewer firefighters than the city currently has. There is no plan to lay that many firefighters off. We asked the mayor's office to account for that discrepancy, but got no answer except an assurance our questions had been passed on. 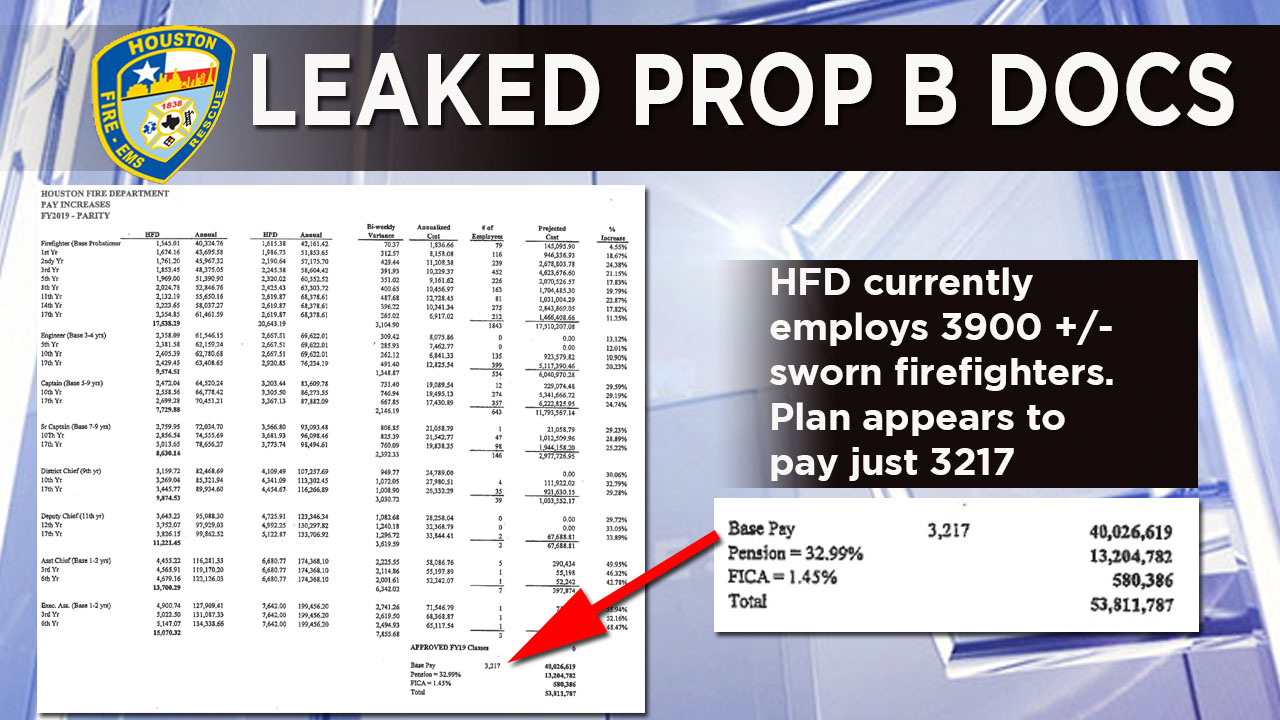 A source inside the city did confirm to 13 Investigates that the documents are authentic.

The 700 missing firefighters is just one of the confusing details in the leaked documents. The mayor previously said he is saving millions by holding firefighters to the same educational standards as police officers, but the leaked documents show Turner is at least considering denying firefighters millions in tuition reimbursement, investigator incentives, field training incentives, mentoring bonuses, and clothing allowances. In the last calendar year, police officers were paid more than $4.3 million for those incentives alone.

The proposal appears to limit other incentives for firefighter professional certifications and less desirable shifts. Houston police officers earned millions in those categories as well.

According to the Prop B ballot language, most Houston firefighters would seem to qualify for at least a few of the cut or discounted incentives. 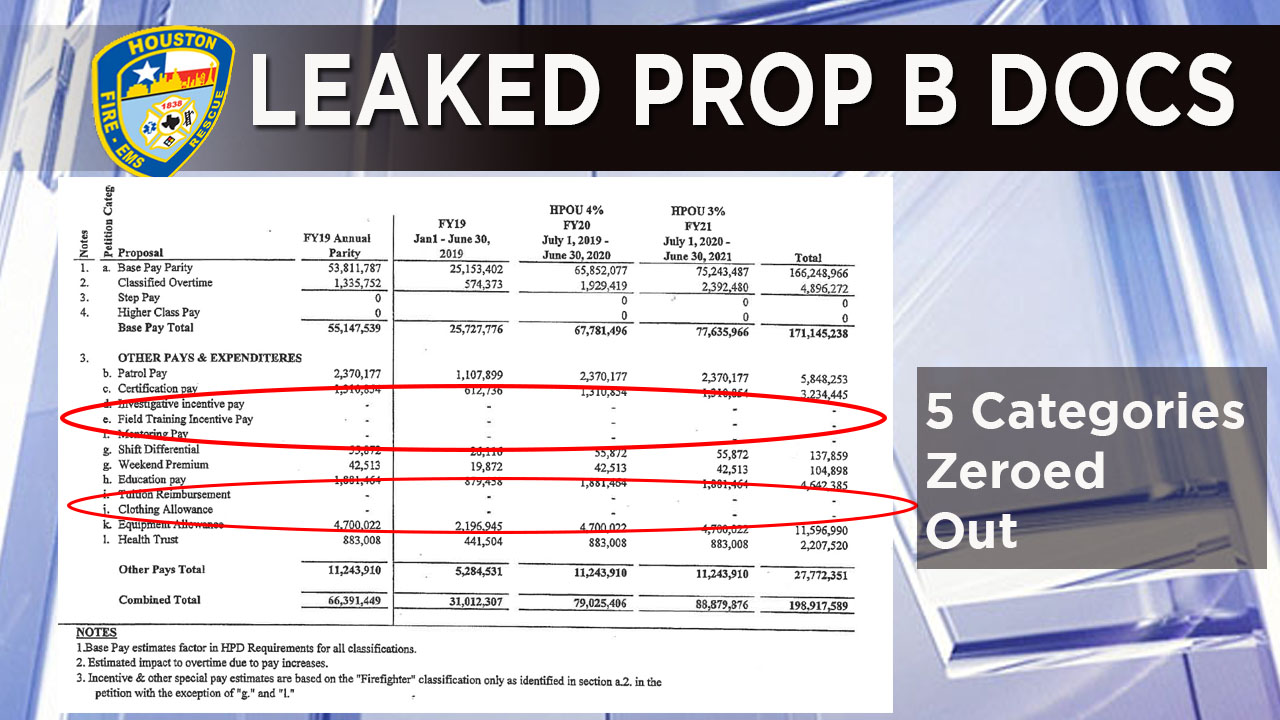 We asked the mayor's office to explain the discounted incentives. Those questions were similarly unanswered.

Union President Lancton telling 13 Investigates, "We see with these secret documents, there's a reason why the mayor doesn't want to open the books. And that is he's been lying to the public (about fully implementing Prop B)."

Lancton is not alone in his concern. The elected city financial watchdog City Controller Chris Brown weighed in, telling 13 Investigates, "I'm concerned as the taxpayer watchdog as we move into the budget season that we have some clarity about what the costs are from Prop B."

Brown, who has to sign off on the city's budget, asked pointed questions in a letter sent Thursday to the mayor's finance director about how Turner justifies the cuts. 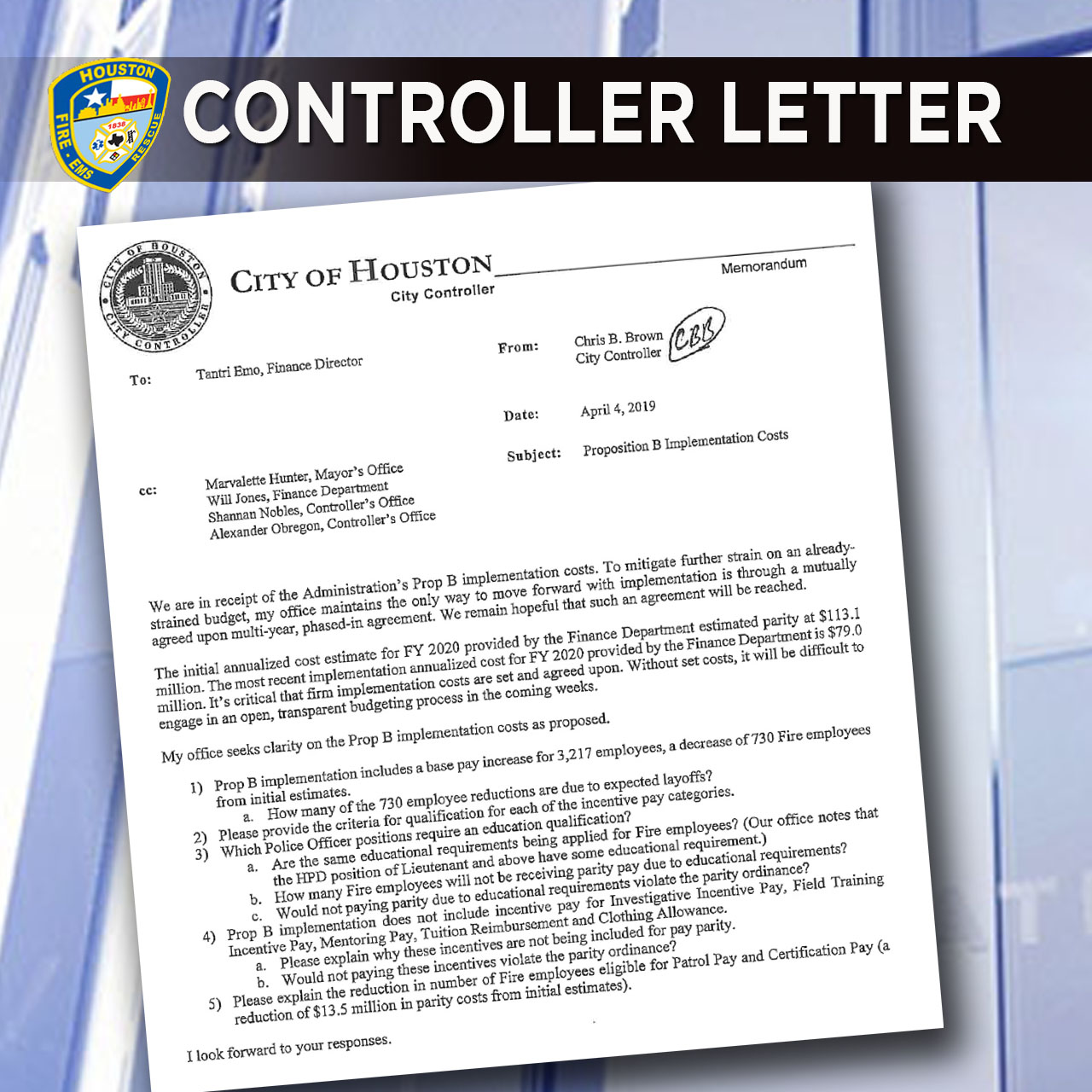 "I think the problem is that we pass a budget and we don't have accurate costs, and then we find out somewhere mid-fiscal year that, oh, the costs are actually much higher than we estimated," Brown said.

Mayor Turner was asked Friday about the controller's concerns. Turner says City Attorney Ron Lewis has given him a thumbs up to the approach he's taking.

13 Investigates sent the mayor's office 14 specific questions Friday morning. As of our deadline, we did not get a response. If one comes, we will update this report.