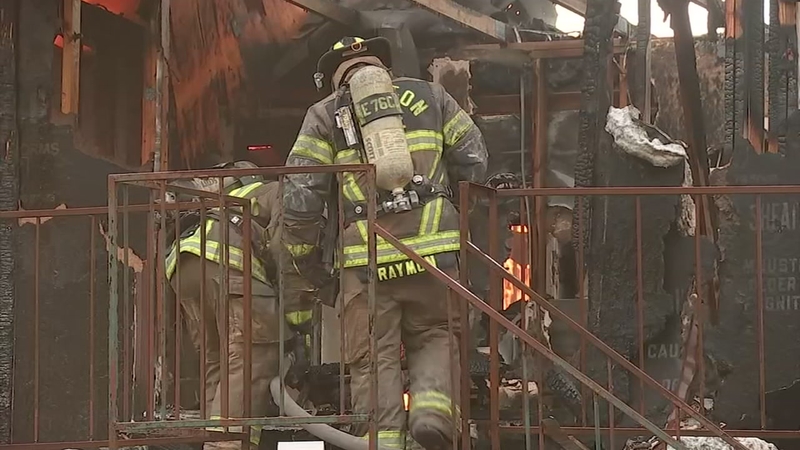 Mayor's cuts to cost of Prop B 'improper': Firefighters' Union

HOUSTON, Texas (KTRK) -- Mayor Sylvester Turner suggested Wednesday Prop B will cost the city just $79 million a year. It is a $21 million savings from the frequently used $100 million mark he cited as recently as a month ago, and doesn't match a newly-released proposal from Turner (details below).

The mayor says his cost cut is based on a city interpretation of educational requirements. Houston police officers of a certain rank must have college degrees. There is not currently a similar requirement for firefighters. The mayor said his plan will save more than $20 million by withholding pay raises for firefighters without the educational degrees police officers need.

"If there are educational requirements for police to be in a certain position and make a certain amount, it's only fair to the police officers and to the people in the city of Houston who voted forward that that same requirement being imposed on firefighters in the same or similar position," Turner told reporters Wednesday afternoon.

He added, "There is no question the position we are taking will withstand any legal muster."

Firefighters, who wrote the ballot measure, say Turner's new plan is not what voters approved. The educational requirements are not mentioned in the ballot language and firefighters suggest Turner told voters that before the November 2018 election. As proof, firefighters' union president Marty Lancton directed ABC13 to a debate on Oct. 6, 2018.

In a video posted on the KRIV website, Turner is asked:
Question: How can you be so sure, because the estimates have moved around a little, how can you be so sure that parity will cost as much as you say?
Mayor Sylvester Turner: Number one, let me dismiss this. This is not parity. OK? It sounds good, but when you look at the way it is written, it says give firefighters everything police get, but it doesn't say give police everything that fire gets. It doesn't deal with educational requirements, it doesn't deal with training, it doesn't deal with promotions. This is not parity. It's asking for parity in rank and seniority only in pay.

At Wednesday's city council meeting, Controller Chris Brown suggested the cut could cause future problems if courts or council don't agree with the mayor's new interpretation.

"It is my hope we can get clarity around these numbers so when we got through the budget process we...have the most accurate information," Controller Brown told council members. "When we did our initial assessment of Prop B for fiscal year 2020 for the entire year, the controller's estimate was $100 million. The administration's estimate was roughly $113 million. The implementation numbers have been provided to me at this point is $79 million. There is some difference there...my concern is that we don't move forward with something and have to pay more in the future. This is all around the framework of having a balanced budget."

Brown encouraged the mayor to work towards a deal with firefighters saying, "I hope the administration and union can work together to come together to get a plan over a multi-year phase in for something we can afford from the taxpayer standpoint."

Turner released details of a four-year implementation for Prop B Wednesday afternoon. It condenses the five-year proposal Turner made previously into four, but doesn't add new dollars or detail. The full cost also appears to be $89 million per year, not the $79 million announced this morning.

ABC13's Ted Oberg asked the mayor for more data this morning. Turner suggested the union has "quite a bit of data." Union officials responded to the new proposal by renewing a request for underlying number behind the proposal.