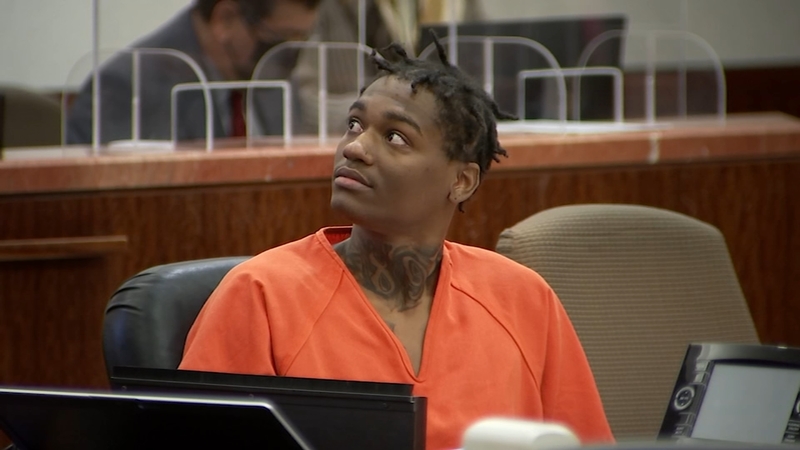 HARRIS COUNTY, Texas (KTRK) -- Traveon Tatum, the man accused of murder while out on bond for a separate murder, will stay behind bars until trial after a judge denied him bond during a hearing.

Judge Josh Hill denied Tatum's bond, but not before explaining to the Harris County District Attorney's Office why the bond was not previously denied.

According to court records, in October 2019, Tatum was charged with murder. His bond for that case was set to $50,000. Records show Tatum made his bond a few days later, and was released from jail.

In May 2020, while out on bond for that murder trial, he was charged with aggravated assault with a deadly weapon. Records show the district attorney's office filed a motion to revoke his bond, and put him back in prison. Instead, the bond was set to $150,000.

Tatum spent one year behind bars, and in 2021, he made bond. Court records show he violated his bond many times, including GPS and curfew-related issues.

In February 2022, while out on bond, again, he was charged with a second murder.

The courtroom was filled with family and friends of Tatum and his alleged victims. Crystal Johnson sat on the court bench, hunched over, with her hand in a prayer position, before Judge Hill announced he was denying Tatum's bond.

Tatum is accused of murdering Johnson's son, Ondreus Patterson, in 2019. Johnson said a second family, now mourning, could have been spared if Judge Hill had revoked Tatum's bond when the district attorney first asked in 2020.

The Harris County District Attorney's Office sent ABC13 a statement saying, "Prosecutors asked the judge in 2020 to revoke this defendant's old bond and deny him a new bond, because he picked up a new charge of aggravated assault with a deadly weapon, a gun. As the records shows, we have repeatedly warned the court that this is violent offender should be held behind bars pending trial. The record also shows that the judge did not agree. Now the defendant is charged murdering someone else."

Judge Hill, however, sees it differently. ABC13 reached out to him repeatedly to ask why the bond was never denied in 2020, when Tatum was accused of violating his bond. While the judge cannot comment on pending cases, he made his argument clear in court.

"The law requires an actual hearing, where admissible evidence is presented in every instance. Where the state wants to hold someone at no bond, take away someone's bond, or raise someone's bond," Judge Hill said.

Judge Hill argued that while the state filed a motion to deny bond back in 2020, the district attorney's office did not properly request the hearing, like they did this time.

"I see there was never a hearing requested on that motion, had there been a hearing, the hearing would have been granted," Judge Hill said.

Phillip White, who is representing the state in this case, said he was not in court in 2020, so he can't speak to how it was done back then. But now, the district attorney's office will make more of an effort to bring the request for hearings to deny bond, to a judge's attention.

"Going forward the goal is to file the paperwork, bring it to the court's attention as soon as possible and have that hearing within seven days," White said.

White and Judge Hill agree that COVID-19 played a big factor in this case. Hearings were virtual and dockets were handled remotely, which was unchartered territory for the Harris County Criminal Justice System.

In some cases, the district attorney's office has told ABC13 that they won't request a hearing to deny bond because those hearings require witnesses and evidence, and could potentially jeopardize a case.

Meanwhile, Johnson hopes the district attorney's office and the judges can start getting on the same page. That way families are not impacted by technicalities.

"This is a prime example of a case where a hearing was held, and a judge followed the law. Evidence was presented by the prosecution, and the judge denied bond," ABC13 legal analyst Steve Shellist said. "He will sit in jail until such time as they revisit this issue."