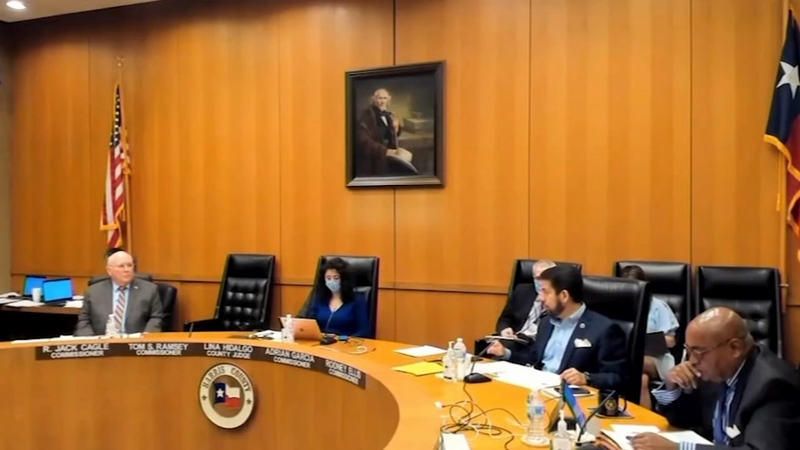 HOUSTON, Texas (KTRK) -- Harris County Commissioners voted unanimously to urge the Harris County Bail Bond Board to require violent offenders to pay a minimum of 10% of their bonds to be released from jail.

Precinct 2 Commissioner Adrian Garcia proposed a resolution, with the argument that some bail bond companies are asking for as little as 1% for offenders to be released from jail.

Last week during a press conference discussing crime initiatives, Mayor Sylvester Turner said he directed the city's legal department to draft an ordinance requiring the same argument as Garcia. Before the matter is brought before the city council, Turner is calling on the Harris County Bail Bond Board to consider the reform.

"If the bail bond board was to adopt such a standard for the entire county, then the city would consider it unnecessary to move forward with the passage of the proposed ordinance," Turner said.

Garcia said it is important to join together on the matter, "I think it's important for the bail bonds board to hear us in full solidarity that violent offenders should not be given a fire sale on their bond so they can go out and do more harm."

Garcia said he consulted the city's attorney who indicated the Bail Bond Board did have the authority to implement such a rule.

Commissioner Jack Cagle voiced concerns that the resolution would take pressure off judges who have come under scrutiny for granting low bonds.

"This takes the focus off the judges and I think this is the precisely wrong action," Cagle said. "We have judges who are granting revocations of bonds. The reason bondsmen are putting 1% or 2% because the bail bondsman don't have to come up with the 99% of the rest."
Mario Garza, president of the Professional Bondsmen of Harris County Association, spoke in-person at the meeting and said what they are attempting to do is illegal.

"You want to go down this road in litigation, in your words, then bring it on," Garza said. "Next month we'll be blaming the Easter bunny."

Garza addressed the court for more than 10 minutes about issues in his industry, specifically naming six bail bond companies that have questionable practices.

After hearing from him, Cagle said he had changed his mind on Garcia's resolution and decided to vote in favor of it.

Garcia asked Garza and his colleagues to come up with recommendations to make things better on their front.

The board meets for their monthly meeting on Wednesday, Feb. 9 at 1:30 p.m. The matter is not on their agenda, but Commissioner Garcia is going to present the resolution at the meeting in hopes of getting this resolution moving in March.