13 people who made a big impact on Black history in the U.S. and Houston 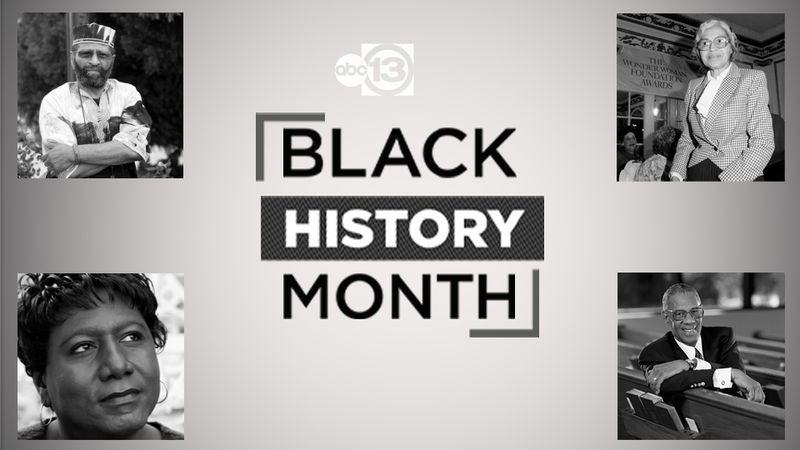 HOUSTON, Texas (KTRK) -- "Real education means to inspire people to live more abundantly, to learn to begin with life as they find it and make it better." That is just one of the quotes from Carter G. Woodson, who is credited with creating the event that would evolve into the Black History Month we celebrate today.

Black History Month was designated in 1976 and has been recognized by every U.S. president in the month of February since. Woodson was a historian, whom with minister Jesse E. Moorland, founded the Association for the Study of Negro Life and History (ASNLH). It's known today as the Association for the Study of African American Life and History (ASALH). But the mission remains the same: to research, recognize and promote the achievements of Black Americans and those of African descent.

To honor that, here are 13 people who have made an impact on Black history in the U.S. and right here in Houston.

Rosa Parks stood up for civil rights by sitting down. On Dec. 1, 1955, she refused to move to the back of a city bus. Little did the 42-year-old know that her act would help end segregation laws in the South. "Stand for something or you will fall for anything. Today's mighty oak is yesterday's nut that held its ground."

Parks' actions would go on to trigger a 381-day boycott of the bus systems by Black Americans that was organized by Martin Luther King Jr., who was 26 years old at the time. The boycott led to a Supreme Court ruling that desegregated public transportation in Montgomery. But it wasn't until the 1964 Civil Rights Act that all public accommodations nationwide were desegregated.

MORE: How Rosa Parks stood up for civil rights by sitting down 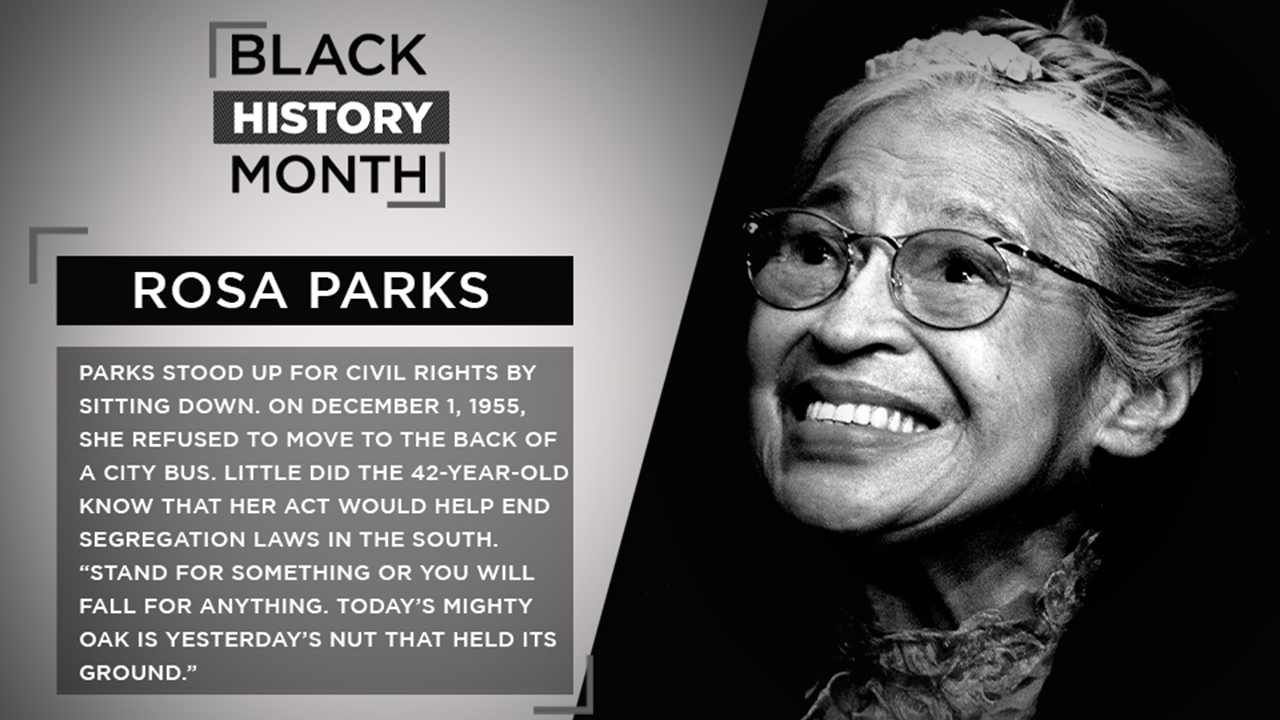 The pastor emeritus of Wheeler Avenue Baptist Church, Rev. Bill Lawson was a pioneer in the the civil rights movement and helped to lead the battle to end segregation in Houston. He helped lead local sit-ins and marches to integrate the city. His philosophy in life: "I believe in bringing people to the table together. Even if we don't all agree, at least we're able to hear one another."

Lawson hasn't slowed down when it comes to activism. In the summer of 2020, after George Floyd's murder, Lawson joined the march honoring Floyd in Houston. ABC13 anchor Melanie Lawson said her father felt that it was important and insisted on attending the march in person, even at age 91. 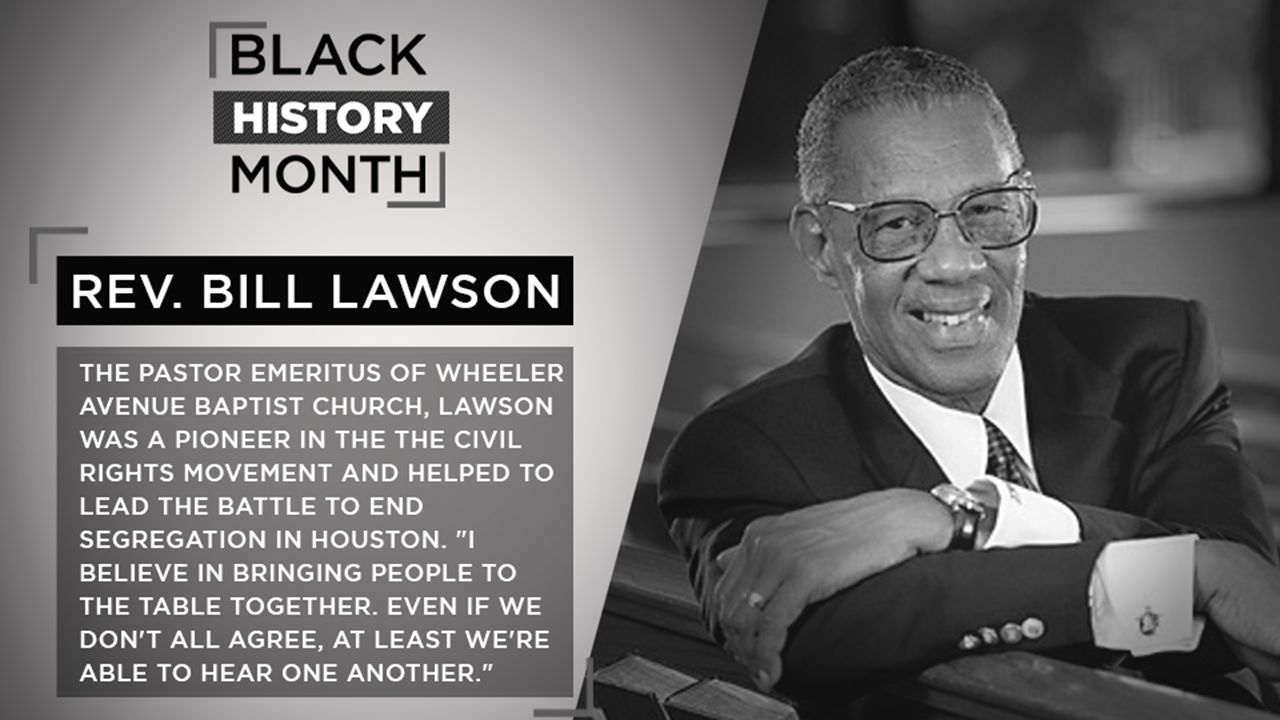 Founder of the country's first Martin Luther King Jr. parade in 1978 and the Black Heritage Society, Duncantell fought for equal rights for African Americans for many years in Houston. He dedicated his life to preserving the legacy of Dr. King. He was a fighter for the community and was willing to die for what's right. Duncantell died in Nov. 2018.

Speakers at his funeral described him as a warrior. "I'm going to remember that he chained himself to a tree that he had planted years ago in the memory of Dr. King," said Houston City Councilman Michael Kubosh at the time.

Duncantell was also the catalyst for the renaming of South Park Boulevard to Martin Luther King Boulevard and the creation of a statue of Dr. King in MacGregor Park.

Follow this link for more on Duncantell's life and contributions. 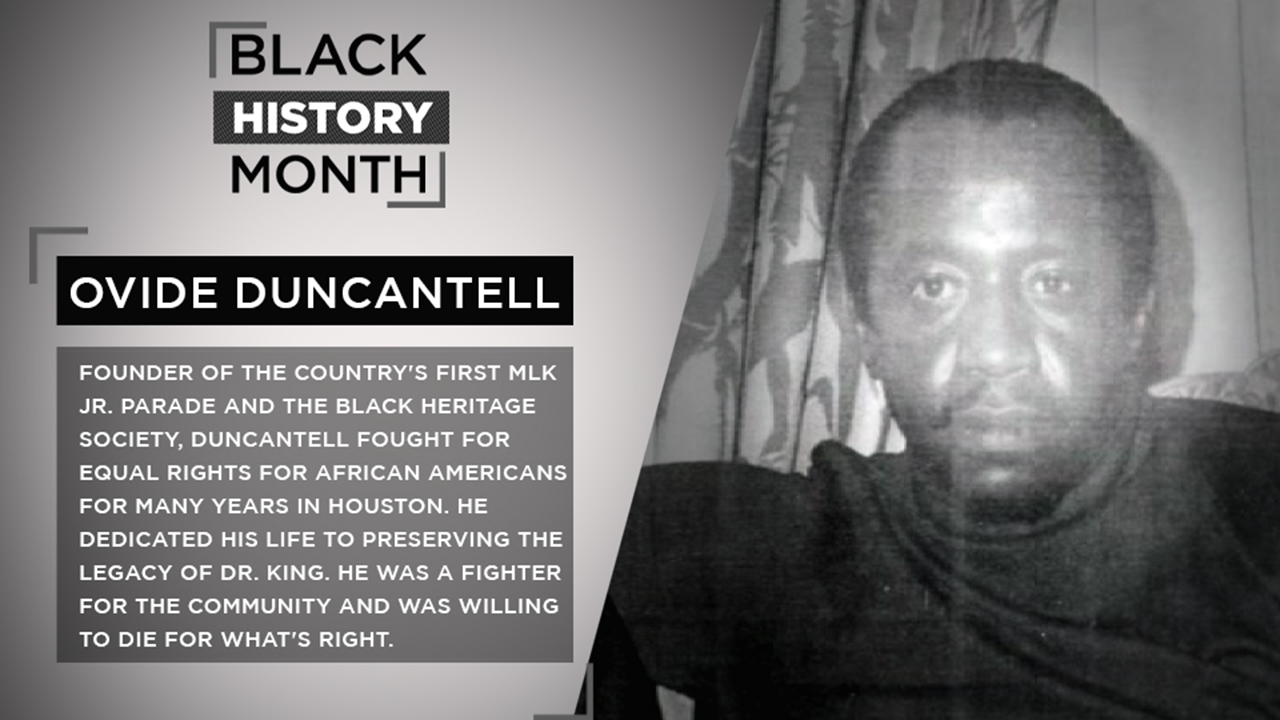 While Martin Luther King Jr needs no introduction, his impact will forever bear repeating. A Baptist minister and activist, King became the most powerful leader in the civil rights movement until his death in 1968 in Memphis, Tennessee. King was going to lead a protest march in sympathy with striking garbage workers in the city when he was assassinated. He reminded the world of a dream filled with hope, change and equality. "Darkness cannot drive out darkness, only light can do that. Hate cannot drive out hate, only love can do that."

King was the youngest man to receive the Nobel Peace Prize at just 35 years old. According to nobelprize.org, when notified of his selection, he said he would turn over the prize money, $54,123, to furthering the civil rights movement.

And did you know? His iconic "I Have A Dream Speech" wasn't first delivered on the steps of the Lincoln Memorial in Washington, D.C. Its first run occurred in North Carolina. 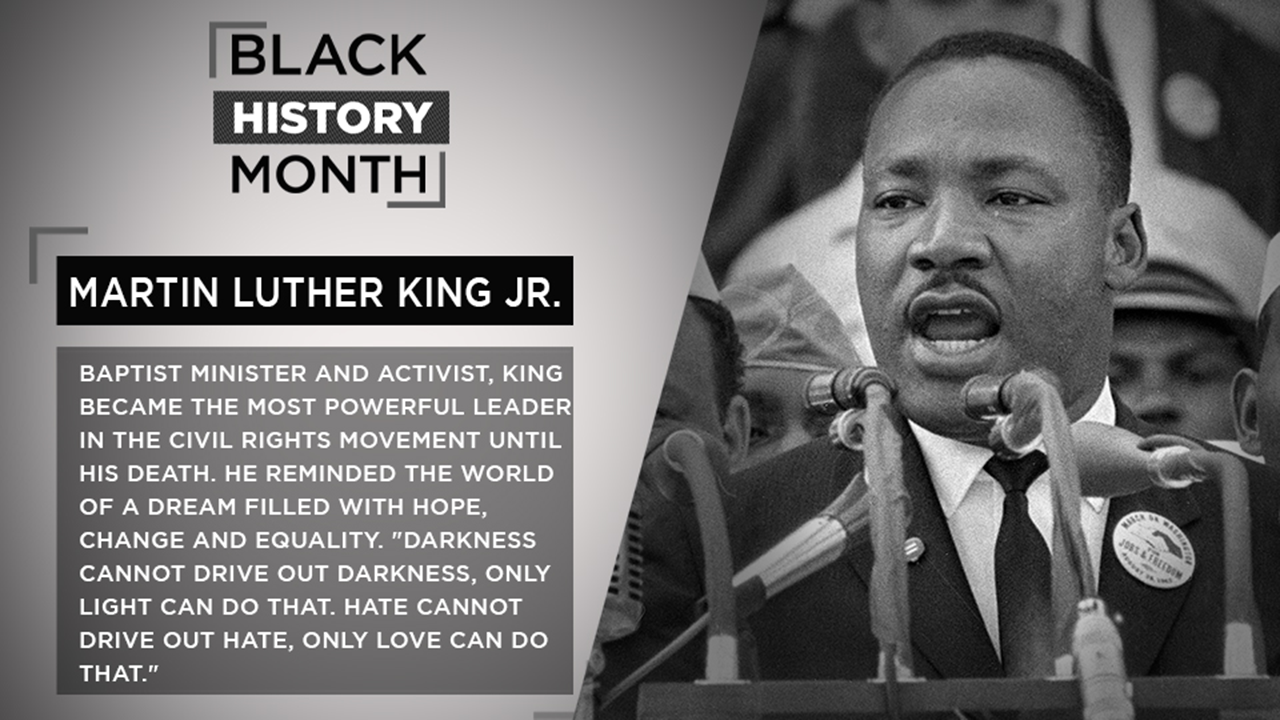 Reflect more on King's legacy with these stories:

A Houston trans rights advocate, Monica Roberts worked with local law enforcement to make sure murders in the transgender community were investigated fairly and with journalists to ensure victims were correctly identified after their deaths and were reported with empathy and sensitivity. Her groundbreaking blog "TransGriot" celebrated Black trans women and men and gave a voice to those who did not have one.

At the time of her death in Oct. 2020, Mayor Sylvester Turner reflected on Roberts' work and impact on Houston saying in part that she "walked every hall of government with professionalism, grace, and toughness to ensure transgender individuals and everyone in the LGBTQIA+ community would not be forgotten or overlooked." She was also one of the original board members of the Mayor's LGBTQ Advisory Board. 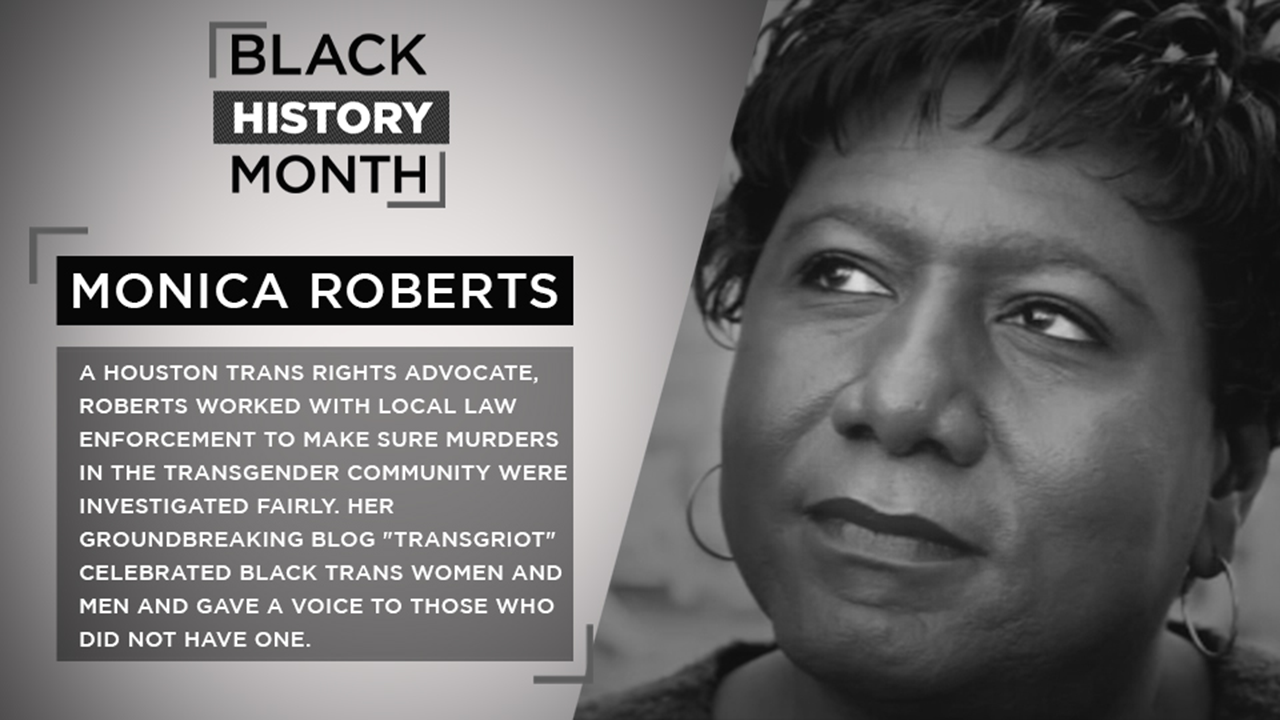 Civil rights activist, poet and award-winning author. Maya Angelou became Hollywood's first female Black director, but is best known for her 1969 memoir "I Know Why the Caged Bird Sings." "Instead, pursue the things you love doing, and then do them so well that people can't take their eyes off you."

In a celebrated life and career, Angelou also made history outside of the arts when in the 1940s, she became the first Black female street car conductor in San Francisco. 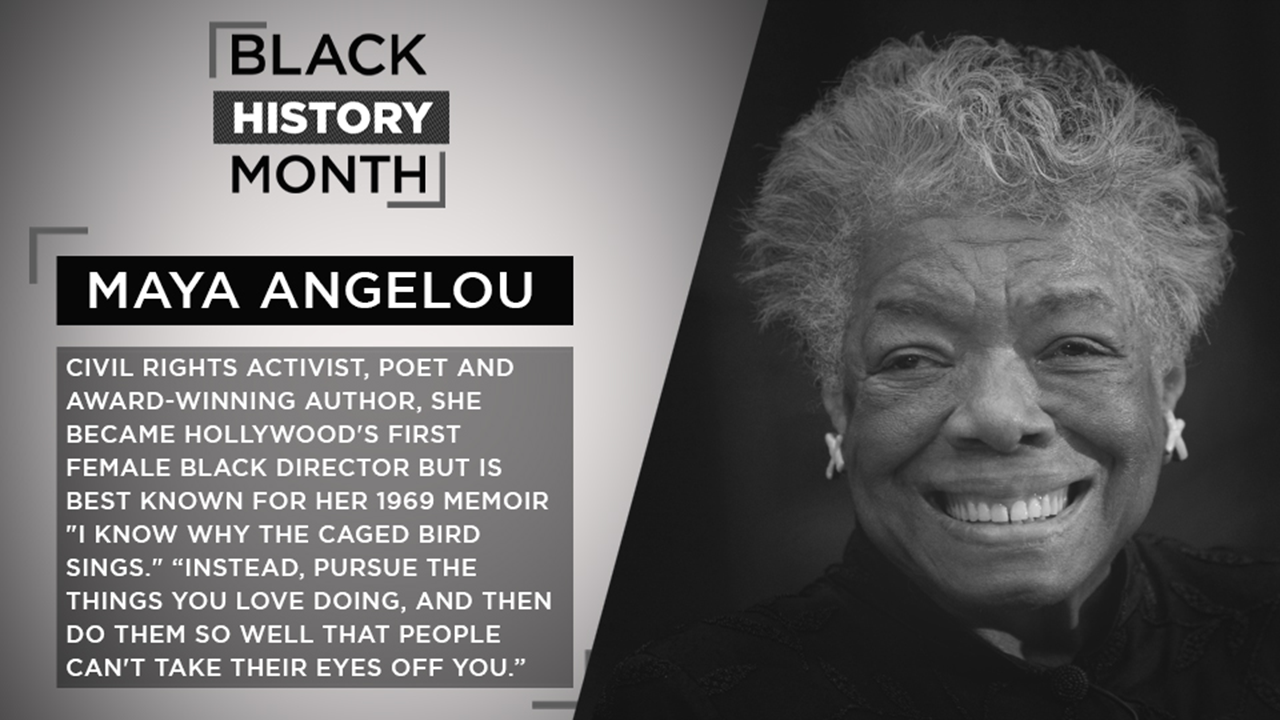 Look back at the life of Maya Angelou:

Self-identified drag queen, activist, performer and survivor, Marsha P. Johnson played a significant role in the Stonewall Uprising in 1969. The "P" stands for "Pay it No Mind," which is what Johnson would say when asked about her gender. Johnson also founded the Street Transgender Action Revolutionaries, a group that worked to help homeless transgender youth.

Sadly, Johnson died in 1996 at just 46 years old. But her legacy lives on, especially in her home state of New Jersey. In August 2020, officials approved a piece of land to build a monument dedicated to Johnson. Union County officials said it would be the first in the country to honor a transgender person.

An icon in the LGBTQ+ community, Johnson continues to inspire trans activism.

MORE: Pride Started as a Riot: The LGBTQ+ Community Rallies Together with the Black Lives Matter Movement 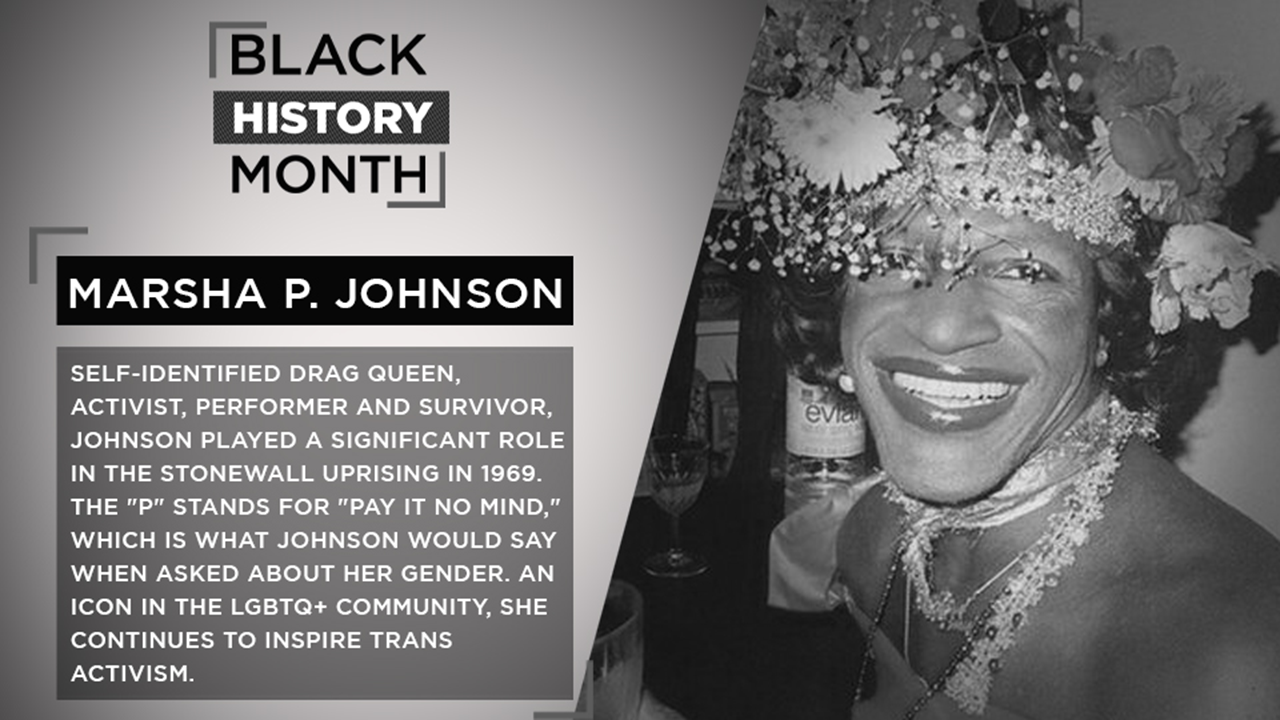 A lion of the civil rights movement, John Lewis put his life on the line to fight racism. The beating he endured in 1965 by Alabama state troopers helped galvanize opposition to racial segregation. "You cannot be afraid to speak up and speak out for what you believe. You have to have courage, raw courage." Lewis died on July 17, 2020, but his legacy is as alive as ever. 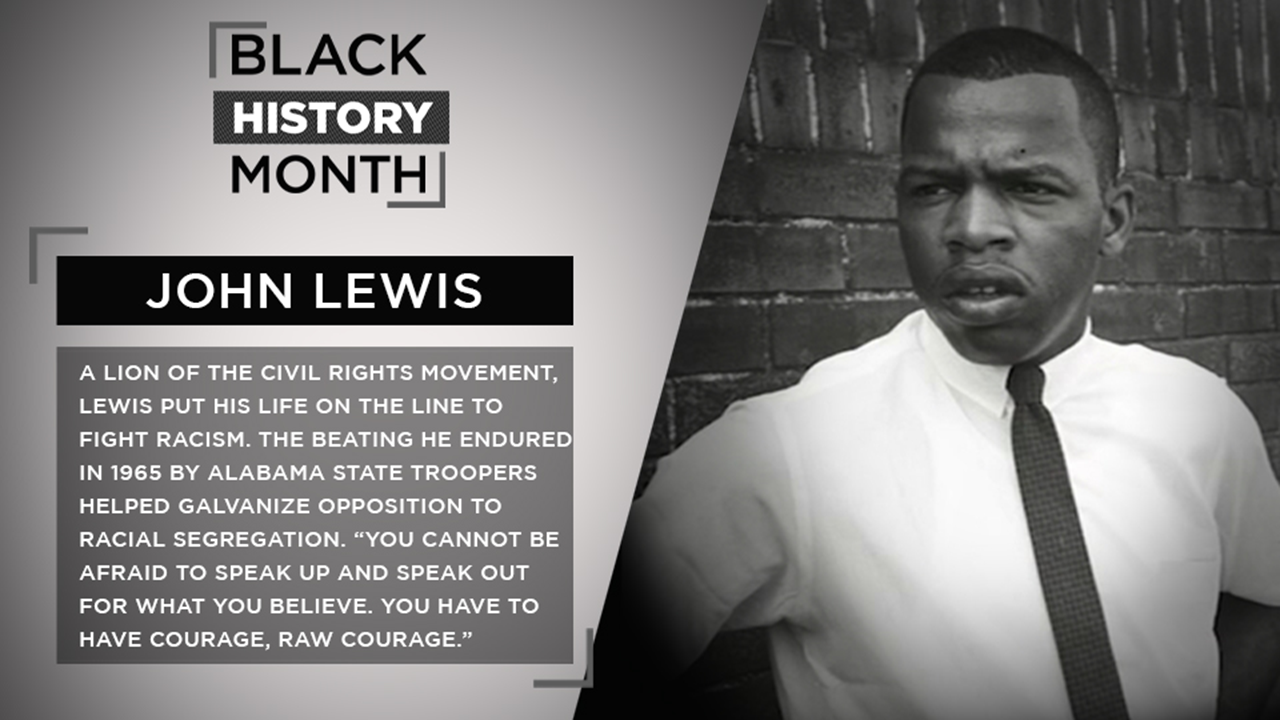 Jackie Robinson broke the color barrier when he took the field for the Brooklyn Dodgers in 1947, becoming the first Black athlete to play Major League Baseball. "I'm not concerned with your liking or disliking me... all I ask is that you respect me as a human being." The league now celebrates Robinson's life annually with Jackie Robinson Day on April 15.

But even before his professional baseball career, Robinson stood up for equal rights. He'd been arrested and court martialed while he served in the Army for refusing to move to the back of a segregated bus. He was eventually acquitted and received an honorable discharge.

Robinson was inducted to the Baseball Hall of Fame in 1962. 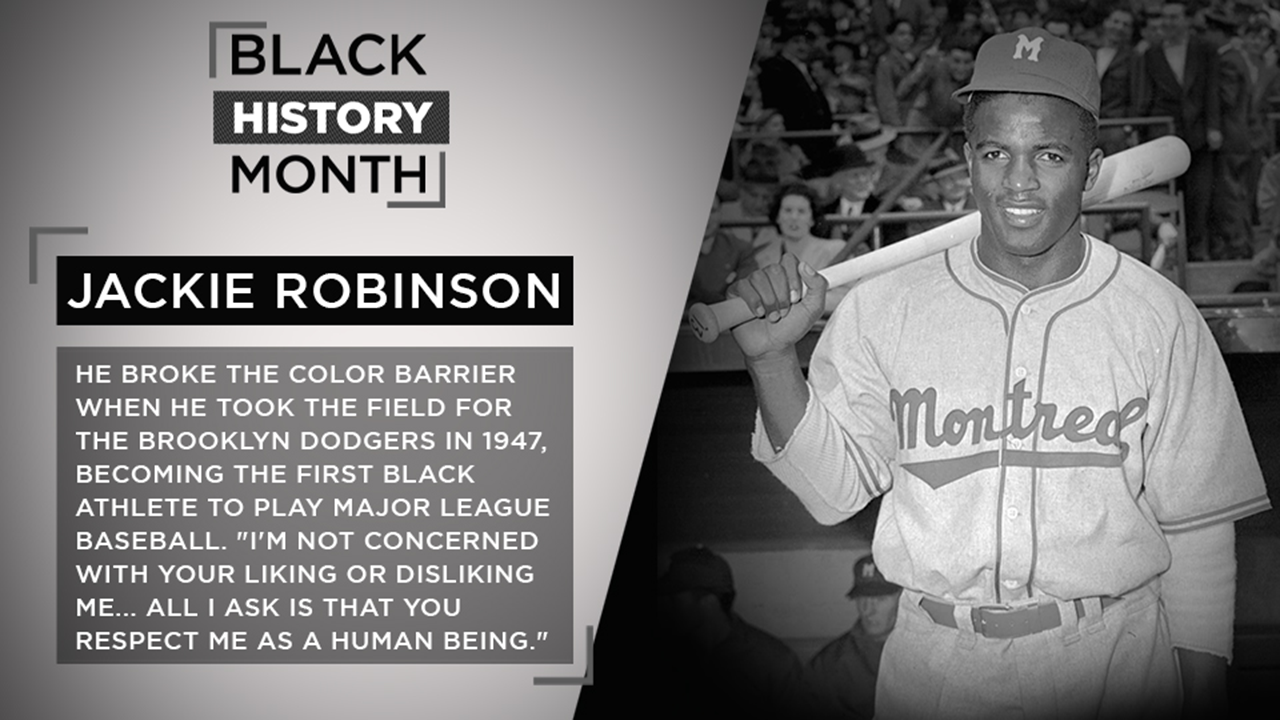 The youngest of 20 children in a family of sharecroppers in Mississippi, Fannie Lou Hamer has been known as the woman who changed the South. She fought for Black voting rights and became a powerful voice in efforts for greater economic opportunities for African Americans. "Nobody's free until everybody's free."

Hamer's push for voting rights for Black people began when she attended a meeting led by civil rights activists who belonged to Student Non-Violent Coordinating Committee (SNCC) and Southern Christian Leadership Conference (SCLC). She would go on to become a SNCC organizer and would even lead a group of volunteers to vote. Though they were denied due to an unfair literacy test and harassed on the way home, Hamer pressed on.

She successfully registered to vote in June 1963. A year later, she would also organize the Freedom Summer voting drive, bringing college students, Black and white, together to help with voter registration in the segregated South.

Read more on this crusader's life. 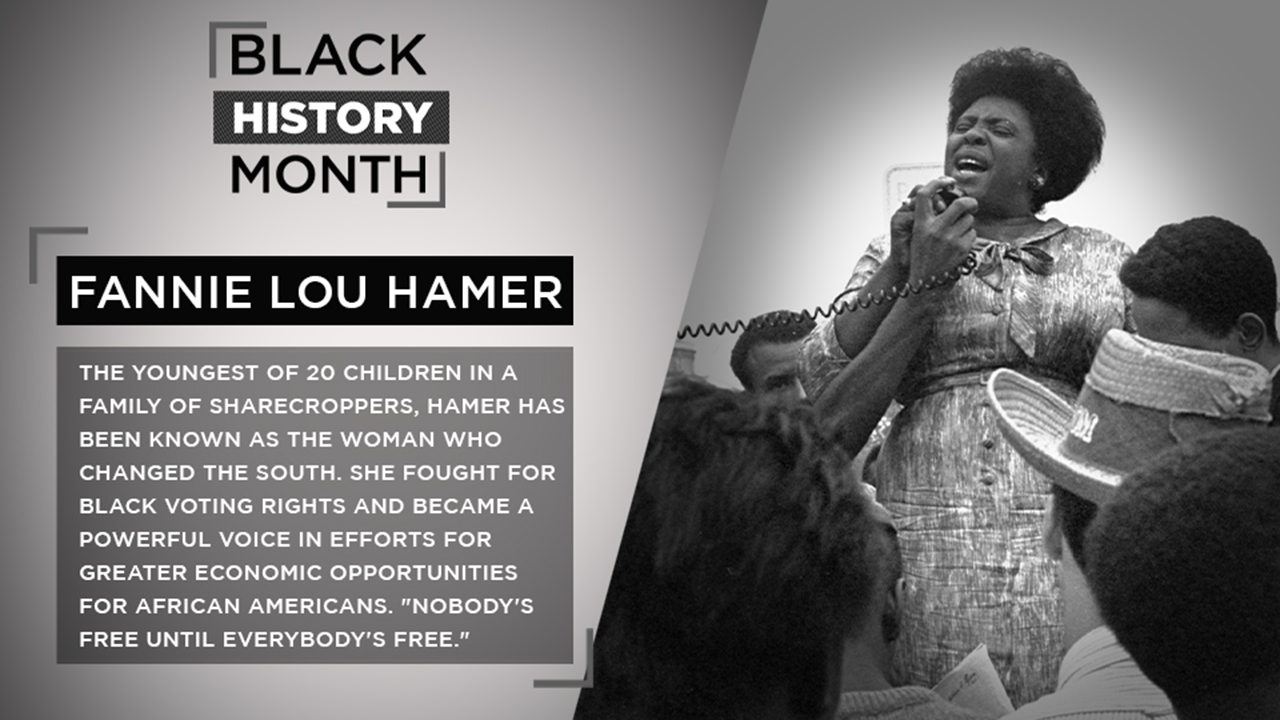 Co-founder and executive director of S.H.A.P.E. Community Center in Houston, Deloyd Parker has helped lead the way toward justice, equal opportunity and human rights across the globe. His parents instilled in him a sense of humility, a willingness to help, the courage to face adversity, and the strength to fight injustice.

S.H.A.P.E. stands for Self-help for African people through education. It was founded in 1969 as a place for people to come together in support of civil rights.

"A lot of people know SHAPE as the 'United Nations of the community,'" said Parker, who explained in 2020 that the fight for racial justice, a key part of the group's mission, is far from over. 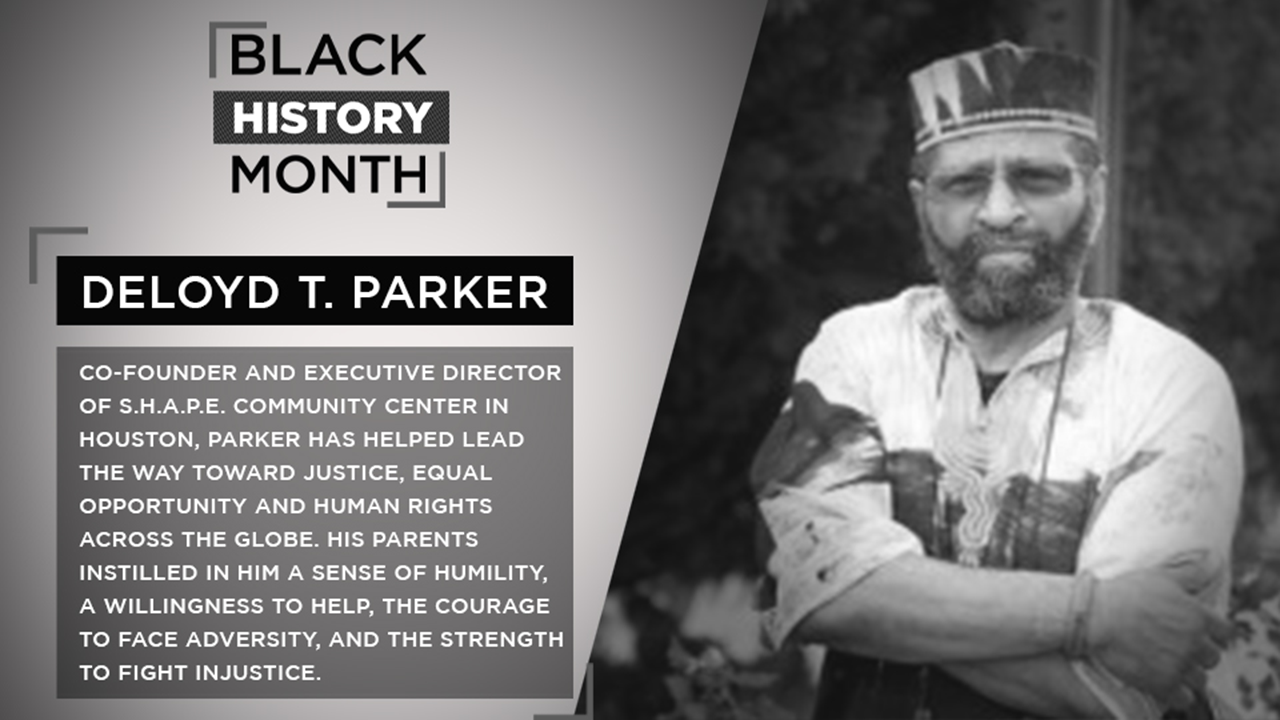 Known as the "Father of Black History," Carter G. Woodson in 1926 launched the annual February observance "Negro History Week," which became "Black History Month" in 1976. "Those who have no record of what their forebears have accomplished lose the inspiration which comes from the teaching of biography and history."

Woodson was also considered a champion of women and a mentor. His Washington D.C. home is recognized as a National Historic Site.

Check out this biography on Woodson. 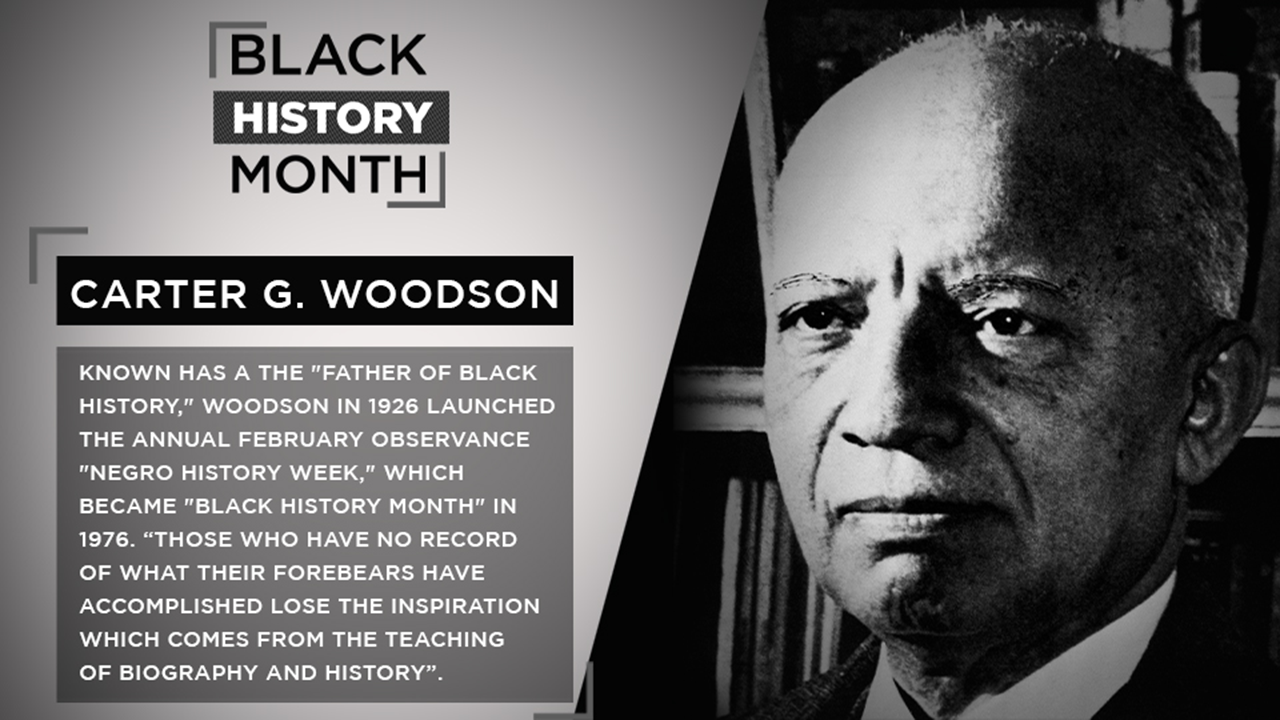 A Houston native, Barbara Jordan was the first Black woman elected to the Texas state senate and first Black Texan in Congress. She helped manage a get-out-the-vote program that served Houston's 40 African-American precincts in the 1960s.

Born in the city's Fifth Ward, Jordan would also go on to be honored with the Presidential Medal of Freedom in 1994. 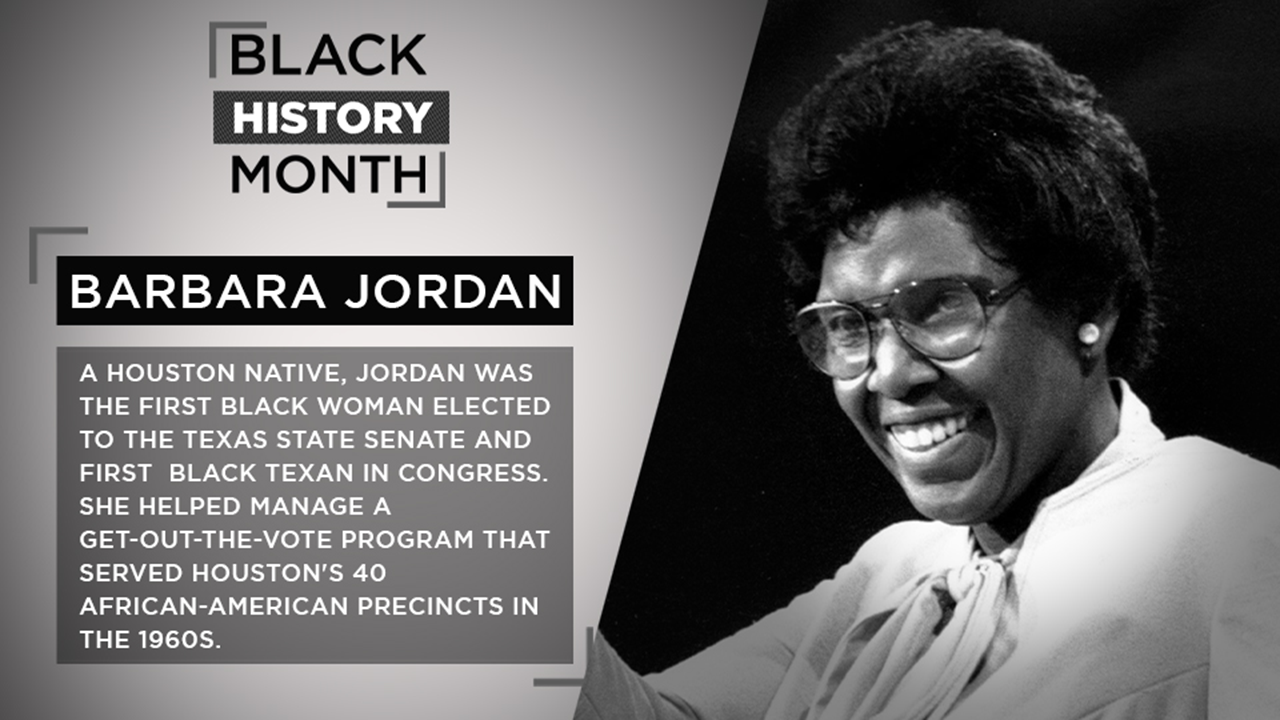 Learning about Black history doesn't have to be reserved for the month of February.

Stream a variety of stories about the change makers and people inspiring communities within our Black History Month collection on ABC13's free apps for devices including Roku, Amazon Fire TV, Apple TV and Android TV. Just search ABC13 Houston wherever you stream. Follow this link to get started.

You can also explore every aspect of Black history all year long. Check out these resources: