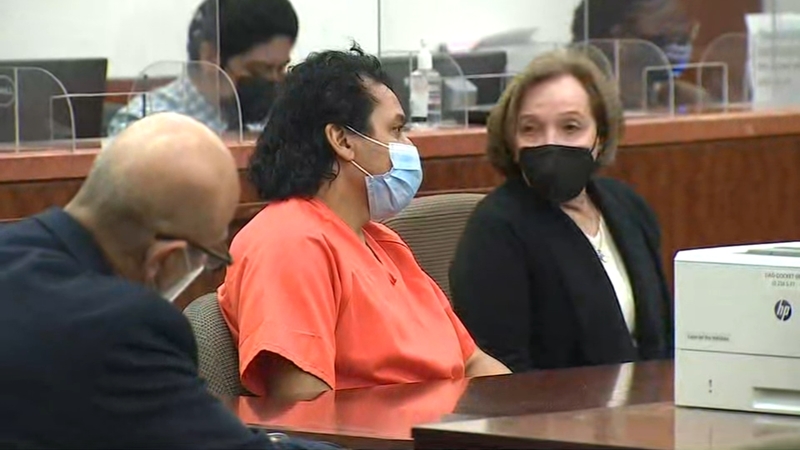 In court, it was revealed that two more people have been charged in connection with the case, bringing the total number of people charged to five.

According to the district attorney's office, a number of people had come into contact with 51-year-old suspect Oscar Rosales after his alleged crime and attempted to help him.

Rosales was arrested at a hotel just across the U.S.-Mexico border in Ciudad de Acuña, Mexico on Wednesday.

The judge found probable cause for Rosales' capital murder charge in the 482nd court Friday. He is being held without bond.

According to the DA's office, Rosales has been on the run from an alleged stabbing charge in Harris County since 1995. He may also be tied to a 2008 murder in El Salvador.

The DA's office is considering the death penalty for the capital murder charge, but must first complete its investigation, which could take years.

Officials said both dashcam and bodycam video captured the death of Galloway during a traffic stop on Jan. 23.

Dozens of officers escorted the body of Cpl. Charles Galloway. He was a toll road deputy, so the procession traveled the route he patrolled on the Beltway.

Galloway's official cause of death was a single gunshot wound to the left side of his face, officials said in court.

The dashcam video allegedly captured Rosales firing a gun directly into the windshield. Galloway was pronounced dead at the scene at 12:50 a.m.

"I've seen a lot of tragic cases and a lot of violence in my career," Sean Teare with the DA's office said. "This is right up there at the top in the brutality and the callousness that Cpl. Galloway was gunned down by."

At a press conference Thursday, District Attorney Kim Ogg said Rosales has used many identities over the years. When he was charged in Harris County in 1995, his name was Maurico Aguilar Albarenga.

Officials are still working to determine if Rosales is actually his real name and if he is actually from El Salvador.

Two of Rosales' relatives were charged with tampering with evidence in the case. According to court records, Reina Marquez and Henri Mauricio Pereira-Marquez, who are identified as Rosales' common-law wife of 17 years and brother-in-law, respectively, are accused of trying to cover up the suspect's involvement in the case.

Now, two additional men have been charged with hindering apprehension. Their identities were not released, but officials said they pawned off jewelry and other items to get cash for Rosales in order for him to flee the U.S.