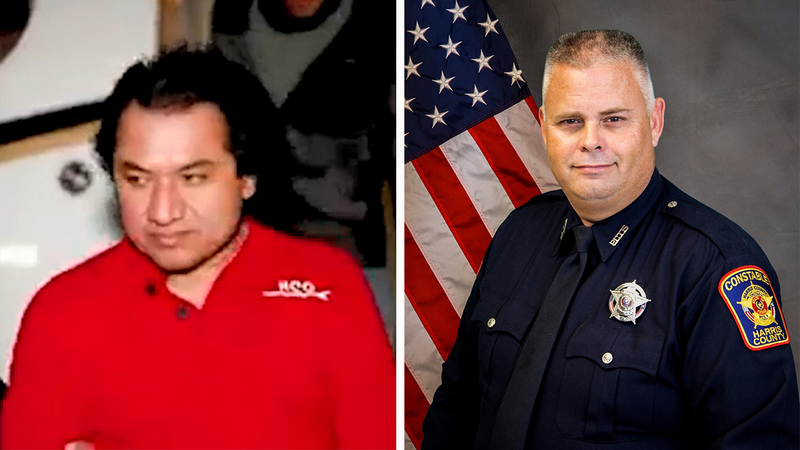 HOUSTON, Texas (KTRK) -- The man arrested in Mexico for the murder of a Harris County Precinct 5 corporal was a 25-year fugitive out of Harris County, law enforcement officials revealed at a press conference Thursday.

According to Harris County District Attorney Kim Ogg, 51-year-old Oscar Rosales was charged with aggravated assault with a knife in the county in 1995.

"It is apparent that Oscar Rosales, a 25-year fugitive out of Harris County for the crime of aggravated assault, has been violent before," Ogg said.

Rosales, who at the time went by the alias "Maurico Aguilar Albarenga," pled guilty and was sentenced to five years. Ogg said investigators believe he has used many identities over the years.

However, Ogg said a motion to revoke deferred adjudication was filed on May 10, 1996 because he failed to complete community service.

Rosales absconded from parole and has been a wanted criminal ever since, Ogg said.

She said Rosales has ties to El Salvador, Guatemala and Honduras. Officials believe he may have potential gang or cartel affiliation.

According to Ogg, Rosales is also reportedly wanted for murder in El Salvador, and officials will be contacting other Central American countries to notify them about his arrest.

"This case has all the ear markings, and is a death penalty case," Ogg said.

If Rosales is found guilty of capital murder of a police officer, his sentence would either be the death penalty or life in prison without parole.

However, law enforcement agencies are still conducting investigations into the deadly shooting.

Rosales is due to appear in court on Friday at 9 a.m.

At the press conference Thursday, officials from the Houston Police Department, Harris County Precinct 5, the Texas Department of Public Safety, FBI and more spoke on how Rosales' arrest was a state-wide collaborative effort.

Just the day before, U.S. Marshals were able to track the 51-year-old suspect to Ciudad de Acuña, Mexico, just along the U.S.-Mexico border, and arrest him.

Rosales was flown back to the Houston area Wednesday night before he appeared before a judge in Harris County Probable Cause Court, where he was ordered held without bond.

Earlier in the week, Houston Police Chief Troy Finner said Rosales was tied to Galloway's murder on Jan. 23, based on video evidence showing the suspect shooting the 47-year-old member of the Harris County Precinct 5 Constable's Office.

According to investigators, Galloway stopped a vehicle for a traffic stop in the 9100 block of Beechnut, when Rosales allegedly got out of the car and started firing at the corporal's vehicle with an assault rifle.
Galloway was shot multiple times and died at the scene in what investigators called an ambush attack.

Since then, authorities arrested Rosales' wife and brother-in-law, Reina Marquez and Henri Mauricio Pereira-Marquez, who are accused of tampering with evidence by wiping down the inside of the suspect's vehicle.

Both Reina and Henri were subjected to house arrest and given a $100,000 bond each. As of Wednesday, Reina posted bond, but remains in custody on an immigration hold. Henri, meanwhile, is still locked up.

An ICE spokesperson provided the following statement regarding the arrests:
"On Jan. 25, U.S. Immigration and Customs Enforcement's (ICE) Enforcement and Removal Operations (ERO) Houston Field Office lodged immigration detainers with the Harris County (Texas) Sheriff's Office on Henri Mauricio Pereira Marquez, a 42-year-old noncitizen from Mexico, and Reina Azucena Pereira Marquez, a 40-year-old noncitizen from El Salvador, after they were both arrested by the Houston Police Department (HPD) for allegedly tampering or fabricating physical evidence with intent to impair.
On Jan. 26, U.S. immigration officials lodged a detainer with the Val Verde County Detention Center in Del Rio, Texas, on Jose Oscar Rosales, a 50-year-old citizen of El Salvador, following his arrest in Ciudad de Acuña, Mexico, for capital murder. Rosales previously illegally entered the U.S. on an unknown date and at unknown location without inspection or parole by U.S. immigration officials and later fled to Mexico after allegedly murdering a Harris County (Texas) Constables Office deputy."

Unfortunately, Galloway's killing wasn't the only death in the Houston-area law enforcement community over the past weekend. Sgt. Ramon Gutierrez of the Harris County Sheriff's Office was working an off-duty motorcycle escort job early Monday when he was hit by a driver who may have been intoxicated.