'I didn't do it:' Accused killer A.J. Armstrong tells his story 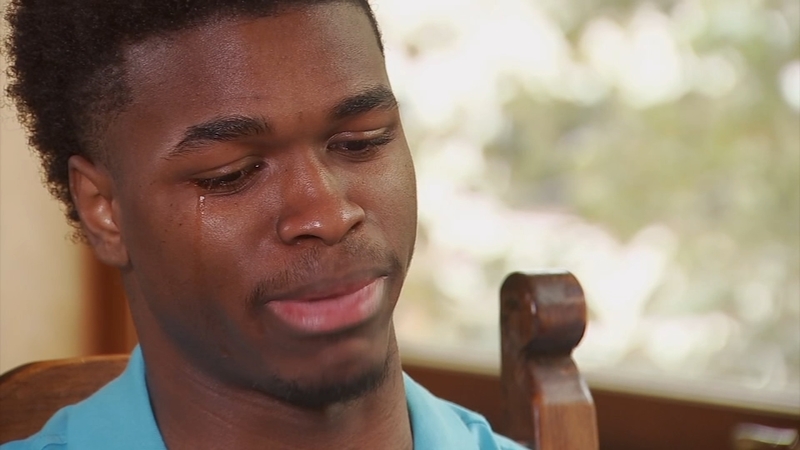 AJ Armstrong talks about life as an accused killer

HOUSTON, Texas (KTRK) -- Antonio Armstrong Jr.'s capital murder retrial is still months from starting, despite once being planned for Jan. 6. Twelve jurors will be selected to decide whether or not AJ is guilty of murdering his parents in their southwest Houston home on July 29, 2016. He was 16 years old when he was charged. AJ is now 20 and living under house arrest with his grandmother.

AJ's inner circle is fiercely protective of him. His grandmothers, childhood friends, cousins, aunts and girlfriend stood with him week after week outside the courtroom during his first capital murder trial last April. After four weeks, it ended in a mistrial. Now, family members are by his side again for round two. They deeply believe AJ is innocent.

For AJ, most of 2019 was spent in a courtroom instead of a college classroom. He studied forensics instead of football plays, surrounded by attorneys and judges and bags of evidence. This is AJ's reality. It's not how he pictured it. In 2016, life was pretty perfect for the Armstrong family.

Parents Dawn and Antonio Sr. were beautiful, successful, smart, strong leaders in the community. Both passionate about health and wellness, they owned a few gyms. Antonio Sr. was an ex-NFL player, a personal trainer, a motivational speaker and an assistant pastor at his mother's church.

Dawn loved big, often posting on Facebook how proud she was of her children and how deeply she loved her husband. On July 24, 2016 she posted a picture of their wedding day writing: "This guy is my everything. He completes me in every way. He's my best friend... and after almost two decades, it's the simple things that make us happy."

Five days later, the couple would be dead.

What impact will lost evidence have on the AJ Armstrong trial?

They were both shot once in the head while they slept. The killer used Antonio Sr.'s gun, which the father of three usually kept in nightstand drawer.

At 1:14 a.m., AJ called 911. He's heard on the recording whispering to the dispatcher, saying he just heard gunshots from his parents' room. AJ woke up his sister Kayra, who was 12 years old at the time and they went downstairs to wait for police. Officers arrived in minutes. AJ disarmed the house alarm and let officers inside. Hours later, AJ, a high school junior enrolled at Lamar, was charged with killing his mother and father.

Before his first trial, AJ told Eyewitness News a masked intruder killed his parents. Now 20 years old, he sat down with ABC13's Courtney Fischer for a second interview as he awaits his second trial.

So, what does AJ want people to know?

"For me, it's as simple as I didn't do it. It's just as simple as that," he said. "I've been adamant about that since the moment everything happened, from the moment I was on the phone [with 911] until this day, I've said I didn't do it. I'll never change from that because I know it's the truth. And for me that's just, you know, that's just the one thing that I really want people to know.

The case has dragged on for three and a half years. AJ spent eight months in juvenile jail after he was arrested. After turning 17, he was certified to stand trial as an adult and bonded out of jail in March 2017. There were more than two dozen court appearances followed by the month-long trial in April 2019. Of the 12 jurors, eight believed he was guilty and four believed he was not guilty. The mistrial was announced after 19 hours of deliberation.

Despite the unwavering support from friends and family, there are still people who believe AJ's guilty. How does he handle that?

"If you'd ask me that a couple of years ago, I would have told you it genuinely, genuinely bothered me," said AJ. "But now, with me growing up and maturing, it doesn't. I can't sit here and allow it to affect me because at the end of the day, not everyone's going to love me. I'm not going to be everyone's favorite. People are going to take things how they want to take things. You can't control that."

During the first trial, AJ broke down once in court: when prosecutors enlarged the autopsy photos of his mother and father for the jury. Days later, the state published thousands of pages of text messages between AJ and his parents about the high schooler's below average grades. In those messages, Dawn tells her son how disappointed she was, over and over. AJ has never discussed those moments of the trial publicly, until now.

"Seeing pictures of my parents and just sitting there and rereading text messages...I just put myself back in that situation and I just re-imagined just having those conversations with my parents. Whether I was getting yelled at or whether I was doing something good, like just that have that again, just like it's five minutes if that's what it was, just to have that again with my mom, my dad, that's all I want," AJ told Eyewitness News, tears streaming down his face.

Thirty-six witnesses took the stand during that trial. We'll hear from most of them again during the retrial, though the defense won't discuss whether or not new people will be called to the stand. For AJ, seeing his younger sister Kayra testify about that night, was painful.

"I always say she's had it the hardest. She was 12 years old [at the time of the murders] and she's had to go through life. I was in jail, you know, my parents aren't there so it's just -- she's just had a lot."

The mistrial was hard for AJ, though his attorneys maintain it was a win.

"It was frustrating, "AJ said. "I was hurt. I was really upset and I had built my faith. I was so adamant on the idea that I knew this was going to be it. Like, no one could convince me any other way. This was going to be it for me and to have the opposite of that happen? It hurt and it took me a second to kind of gather my thoughts. And once I did, my grandma was telling me: AJ it could have been way worse. Like, you could have been in jail. We couldn't be around you right now. You couldn't be going home with us tonight. Like we couldn't be living to fight another day right now. But we are and that's at the end of the day, that's all that matters."

AJ's retrial is set for March. We asked him: are you prepared for a possible guilty verdict?

"I refuse to think about that," AJ said.

But, he can't ignore the fact that spending the rest of his life in prison is a real possibility.

One of AJ's attorneys, Rick DeToto, tells Eyewitness News the retrial will likely last longer than the first trial.

"There's some things that were not allowed in the first trial that we anticipate coming in in this trial that are pretty eye-opening, pretty devastating to the state's case. So that's a little bit what we think may be different," DeToto said.

The defense won't discuss case specifics or strategy, but DeToto says his team may try to present new evidence. However, AJ won't be testifying. He didn't take the stand during the first trial, either.

"Well, he's already given his statement," DeToto said, referring to the taped police interrogation hours after the murders that was played for the jury. "(AJ) sat there and answered as many questions as (police) asked. Think how difficult it would be for a 16, 17-year-old young man who's never been in court before, never testified, to go up against a trained killer like John Brewer. I mean, he's going to tear him up."

It's important to reiterate, AJ is now 20 years old.

John Brewer is one of the three prosecutors trying the case for the state. We've asked the Harris County District Attorney's Office for an interview discussing AJ's case for three and a half years. Prosecutors won't discuss their strategy on camera. After the mistrial in April, they provided the following statement: "Antonio Armstrong Junior murdered two citizens of our county, and we will continue to fight for justice and bring him to trial again."

AJ's family say they'll keep fighting too. His grandmothers and grandfather, Dawn and Antonio Senior's parents are AJ's biggest supporters. They've backed AJ from the day he was arrested. AJ lives with his grandmother Kay Winston, Antonio Senior's mother, since he bonded out of jail. His younger sister lives there too.

"I've been put in a situation now where my little sister actually does look up to me," AJ says. "I've had to take my faith to a level that most 19, 20 year-olds probably wouldn't take their faith to, just because I've been tested with different situations. My circumstance has caused me to grow up and I've had no choice but to just go along with it."

Related: AJ Armstrong answers questions about the night his parents were murdered.

To catch up on the case, evidence, witness testimony from the first trial, and to learn more about who Dawn and Antonio Senior were, see the ABC13 Armstrong immersive page below.