'It's all my fault:' AJ Armstrong's 911 call revealed as he's on trial for his parents' murders 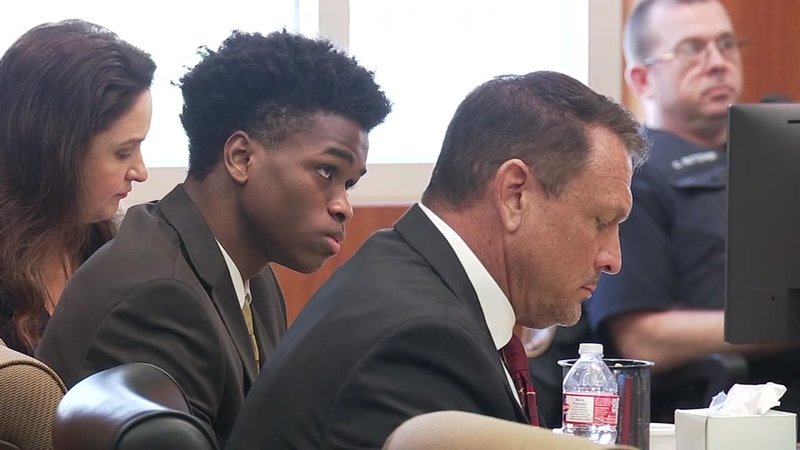 HOUSTON, Texas (KTRK) -- The 911 call made by a teen accused of killing his parents was played in court Wednesday, and at one point, he is heard saying, "It's all my fault."

In the call, which last 12 minutes, A.J. Armstrong said he heard shots fired in his parents' bedroom on the morning of July 29, 2016, when they were killed.

Prosecutors played an enhanced version of the call, with the district attorney's office adding captions so the jury could see the words as well as hear what happened.

TRIAL DAY 2: AJ Armstrong arrives for court. Today we expect to hear AJ’s 911 call from the morning of July 29, 2016 in which he says he heard shots fired in his parents’ bedroom. #abc13 https://t.co/tiNoPnpk4S pic.twitter.com/8SfWUfs1QR

Some of the original call is inaudible, and the state admits it added what it thought was the correct transcription.

The call starts with A.J. on the line telling the 911 dispatcher about the shots and mentioned that his parents' door was cracked open, although it's usually closed.

911 DISPATCHER:
Can you hear anything else?

911 DISPATCHER:
Okay. Did it sound like a handgun, rifle or shotgun?

A.J. also told the dispatcher he was in his bedroom on the third floor, hiding in a closet. His parents' room was on the second floor.

Four minutes into the call, A.J. can be heard saying, "How'd you get into our house?" Seven minutes later he says, "It's all my fault."

A.J. was concerned about his younger sister, whose room was also on the second floor.

He repeatedly tries to wake her up as he's on the phone with 911.

The call ends with A.J. getting his sister out of her room as police enter the home.

The trial is expected to last for weeks.

It began with opening statements on Tuesday with the defense suggesting that the killer is actually A.J.'s older brother Josh.

A.J. has always said that an intruder killed his parents, but prosecutors say no one broke in, pointing out the Armstrongs' heavy duty security system never tripped.

A.J.'s DNA was never found on the gun.

"Evidence can be wiped down, clothes can be changed. The person that controls how much evidence left behind is the defendant ALWAYS," prosecutor John Brewer said.

"We have already found out something new. That the gun was handled by someone else at the scene and the evidence on the gun could have been contaminated," DeToto said.

A.J.'s parents, Antonio and Dawn Armstrong, were shot to death as they slept at their home in southwest Houston.

A.J. has pleaded not guilty to capital murder charges.

Jury seated in trial of teen accused of killing his parents