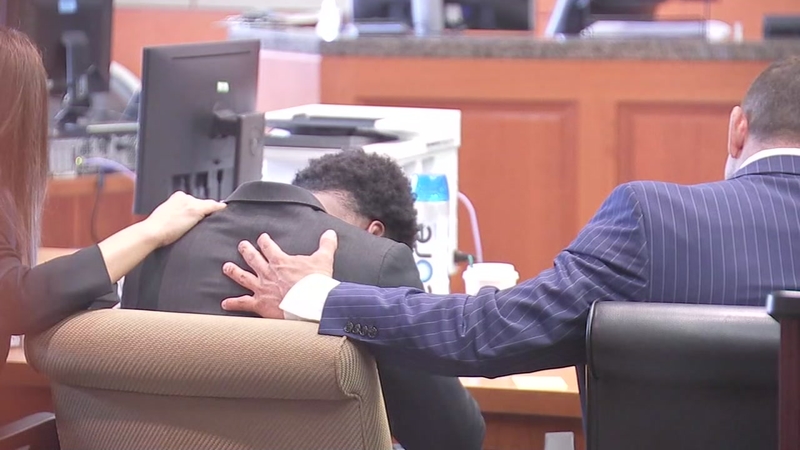 HOUSTON, Texas (KTRK) -- Prosecutors rested their case Thursday with the most powerful testimony to this point in the A.J. Armstrong double murder trial.

The teenage defendant put his head down and sobbed hysterically in court as graphic images were shown to jurors of the gunshot wounds that killed his parents. The photos were part of the evidence that was broken down by Harris County medical examiner, Dr. Ana Lopez.

Throughout the testimony, A.J. never looked up as various images of Dawn and Antonio Armstrong's bodies flashed.

Lopez explained Dawn was shot about 2.5 to 3 feet away and died instantly because her bullet wound caused injury to her brain stem.

The medical examiner then broke down Antonio's autopsy, prompting A.J. to shake and audibly sob in court.

The images were so graphic, some people had to leave the courtroom during this testimony. In addition, one of A.J.'s attorneys also broke down in tears during this part.

To this point, this was the most emotion that A.J. showed over the nine days of trial.

In all, prosecutors called up 24 witnesses, varying in expert testimony to a couple of A.J.'s former coaches.

With the prosecution resting, A.J.'s defense team began calling witnesses, going through at least three since the early afternoon.

Among the witnesses was a home security expert who had visited the Armstrong house three times. The expert claims since the alarm system was "not a very good" installation, and that due to this, its records are not reliable.

"The motion detectors aren't reliable, they're not working properly, or there were multiple people in the house," home security consultant James Parker testified. "There would have had to be somebody running up and down stairs in front of those motion detectors and making a 911 call at the same time."

He added that the action doesn't lineup with the 911 call log of that night, which stated A.J. called dispatchers from his closet, went down to his sister's room, and then went down to the ground floor to let officers in.

When it got to their turn, prosecutors went after Parker, suggesting that his assessment was an opinion worth nearly $50,000, the fee they said was paid by the defense for his expertise.

In a heated exchange, prosecutors poked holes over Parker's logic over the first floor motion detector.

Prosecutors asked, "There's a problem with your logic there, Mr. Parker. You told the jury that the motion detector on the first floor wasn't working properly, or there were multiple people running around the house, right?"

The exchange lasted an hour, and it seemed to arouse the attention of jurors.

A.J.'s lawyers also spoke with Portia Washington, the responding Houston police officer on the night of the murders. In prosecution testimony earlier in the trial, a colleague said she had picked up the gun found on the Armstrongs' kitchen counter. Her testimony Thursday countered what her fellow officer said, insisting she had not picked up the gun.

Nevertheless, the defense will get the next three days to stew with the dressing down of one of its witness. The trial is scheduled to resume Monday afternoon.