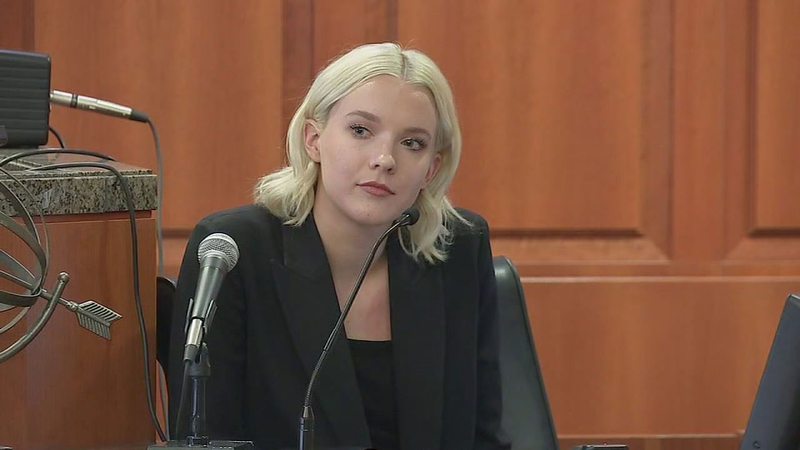 HOUSTON, Texas (KTRK) -- The 10th day of the A.J. Armstrong double murder trial wasn't a daylong affair of previous stages of the proceedings, but there was no shortage of moments that could shift the case.

In about four hours of court time, jurors heard from a former gym client of the defendant's slain father and A.J.'s girlfriend, who has steadfastly defended him since he was arrested for the July 2016 slayings.

The defense called up Joanne Oakes to begin testimony Monday afternoon. Oakes told jurors she had known murder victim Antonio Armstrong Sr. for more than two years, having been a client at his First Class Fitness gym. She also attended church with Antonio and his wife Dawn, who was also murdered.

She testified that she also was a client of another First Class trainer, Tony Hood, with whom she would have a dating and business relationship. By 2016, Hood expressed his intention of leaving Antonio's business to open a gym with Oakes. She told the court the gym eventually opened near First Class.

However, Oakes said Hood received a note that June, a month before the double murders, telling him to stop pursuing his business.

She also recalled receiving a note attached to the windshield of her vehicle. At that time, she was being picked up by Hood after spending two weeks out of the country. It was also during those two weeks that the murders took place.

Oakes expressed being scared even before she noticed a piece of paper on her Jeep.

"I noticed on the way home. There was a piece of paper on the windshield flapping in the wind," Oakes told the jury. "I was very afraid."

She said the note read, "We are watching you."

In addition, Oakes said a note written in dust at the new gym she had opened with Hood had the same words. Oakes told defense attorneys that she considered the notes as threats, but didn't know what it meant.

"I was shaking. I was nervous," Oakes testified, adding she couldn't sleep and she was visibly upset when she was at work as an emergency room doctor at St. Luke's.

The defense capped off its questioning, emphasizing that A.J. was already behind bars when she received her note.

Prosecutors cross-examined Oakes, who told them she was shown the murder scene note and was asked about whether the handwriting was the same to hers.

Additionally, the prosecution points out a difference regarding the note in dust at her gym. Oakes earlier testified never seeing the note, but prosecutors allude to her telling an investigator she had. She told prosecutors she believed the note was in relation to her gym venture.

The state also pointed out that she didn't want to talk to police when they wanted to follow up with her about the note.

Kate Ober took the stand for the rest of the afternoon. For 4-and-a-half years, she has had an on-and-off dating relationship with A.J.

Ever since the murders of her boyfriend's parents, Ober expressed having to take anti-anxiety medication. According to Ober, A.J.'s brother Josh stayed at the family home two to three weeks before the murders. The brothers stayed in a third-floor bedroom.

Ober recalled never seeing any problems between A.J. and his parents, characterizing their relationship as really good.

On the day of the murders, she told defense attorneys A.J. seemed like his normal "happy, goofy" self through text correspondence. Ober was asked about a conversation they had over a rumor at school, and she recalled A.J. getting advice from his dad. They even spoke on the phone around 9 p.m., a couple of hours before A.J. made the call to 911 about his parents being shot.

Ober's determined attitude during defense questioning soon changed when the prosecution got to cross-examine. Throughout, prosecutors were trying to paint a picture of A.J.'s deception.

Ober was asked about whether she knew A.J. had tension with his parents. And any time she couldn't remember something, the state produced past text messages between the boyfriend and girlfriend.

Prosecutors pointed out how in one exchange Ober was upset A.J. was selling and smoking too much marijuana.

Another exchange - from when A.J. was in juvenile holding - Ober was upset he lied to her about the reason he was kicked out of Kinkaid.

"I feel like you lie to me all the time," she said.

"We wanted the jury to hear from somebody who was with A.J. right up until the murders occurred and who had a relationship with A.J. for the weeks before that. There was a lot of talk about all these texts. They are 16-year-old kids flirting with each other," said Rick DeToto, one of A.J.'s attorneys. "Once again, it's an attempt by the prosecution to come up with a motive and it's just not there. There is no motive."

Oakes and Ober represented the fourth and fifth witnesses of the defense, which began its case last Thursday. Testimony from A.J.'s family members is expected this week.