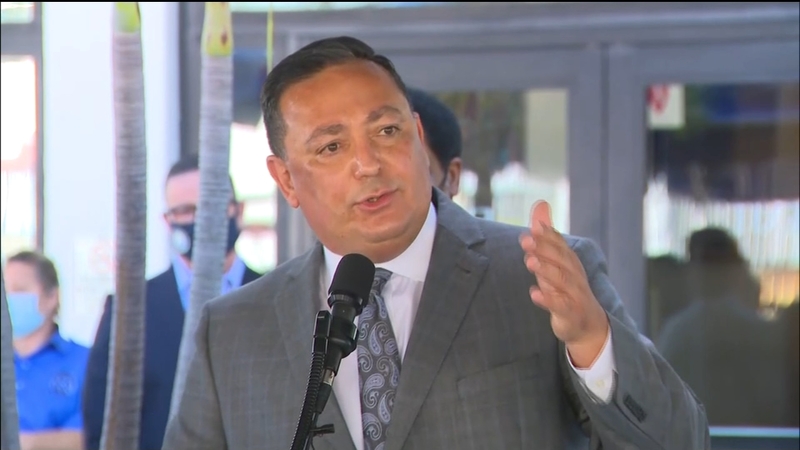 After spending 4 and 1/2 years as the leader of the police department in Houston, Acevedo is taking on the role of top cop in Miami.

He was officially introduced at a press conference alongside Miami's mayor Francis Suarez and city manager Arthur Noriega Monday morning.

Noriega said Acevedo's background will help him understand the Hispanic ties to Miami, expecting Acevedo to continue to "strengthen the bond between community and police."

Suarez said that he spoke to Houston Mayor Sylvester Turner on Sunday night about Acevedo's departure.

"He was incredibly gracious. He's a person of high character and had nothing but amazing things to say about Art, about his leadership capabilities, the fact that he's beloved by his community," Suarez said of his conversation with Turner. "He understood the need for secrecy and he understood that just five years ago, he did the same thing that we did with Art from Austin."

"There's a lot of pain in this nation. Unless we take the time to feel the pain, process that pain, acknowledge that pain of communities of color that are disproportionately impacted by bad policing, we will never get beyond the summer of 2020," said Acevedo, referencing the protests over justice and social inequality.

Acevedo was among the members of law enforcement who marched with protesters in downtown Houston after the death of George Floyd.

As for this new position, according to a Facebook post, the Florida city's police chief resigned his position at the end of February.

HPOU president Douglas Griffin said, "We appreciate his service to Houston, and wish him the best in Miami."

"I was not looking for this opportunity when it arose," Acevedo continued in the email. "But with the end (of) Mayor Turner's final term in office fast approaching, and my strong desire to continue serving as a police officer, we decided the timing for this move was good."

Acevedo echoed those remarks during his introductory press conference.

"I was contemplating what's next. Politics are not in my heart. I have no home. I piss off the left and the right because they're both extreme. But service is in in my heart. And making a difference is in my heart. What people need to understand is that our communities are watching us not just for what we say and do, but what we fail to say and do," Acevedo said in front of Miami officials Monday.

While he spoke fondly of living in Houston and Texas, calling it a "wonderful state" and describing Texans as people who "appreciate straight talk," he also delivered a message to the new community he'll be policing in Miami.

"I love cops. I love good cops. And guess what? The communities that need you most are disproportionate communities of color and poor communities - including poor white communities," Acevedo said. "I'm here to tell you when you do the right thing, I will lose my job before I sell you out."

He also emphasized that he wouldn't tolerate mediocrity within his new department.

In his email to HPD, Acevedo also wrote that Executive Assistant Chiefs Matt Slinkard and Troy Finner "are ready and highly capable" in terms of moving the department forward, though it's unknown at this time who will officially take Acevedo's place.

Recently, the chief talked to ABC13 about the uptick in crime in Houston during this COVID-19 pandemic.

"The most important in this community is to know that our police department, we're not gonna let COVID stop us fighting. We're not going to let ice. We're not going to let anything stop us from continuing to keep our community safe. We announced a couple of weeks ago that we were going to start putting our admin folks out in the streets to increased visibility, and I'm proud to say that, once again, the members of the Houston Police Department are being asked to do more and more and more," Acevedo said after the ice storm.

During his tenure, Acevedo has been critical and outspoken about bail reform in Houston.

"Here's the problem. We've got a judiciary that simply does not care by and large, you've got judges, criminal court judges that are letting hardcore criminals with a history of crime go in one door and out the other," he said.

Acevedo, who was born in Cuba, has said in the past that he's proud to be leading this city. In fact, he's the first Hispanic HPD chief. He once said he's always had his eyes set on Houston.

A year after his arrival to Houston, he sat down with ABC13, saying he was well aware of the issues the Bayou City is facing.

"We live in a city that we know has 20,000 documented gang members," Acevedo said at the time. "A good number of them are committing crimes, they are people doing home invasion robberies, shooting at people, doing carjackings, they are not going to pull over, okay."
WATCH: What Acevedo hopes to accomplish in 2018
EMBED More News Videos

Art Acevedo is sharing his plans for policing Houston in 2018.

Acevedo is also a frequent user of Twitter, often letting people know exactly what's on his mind, from crime to politics.

But when it came to his own departure. He was a bit silent until ABC13's Courtney Fischer jumped in.

@ArtAcevedo - come on, you’re not going to tweet about heading to Miami? The chief who breaks news on Twitter!? 😆

Then around 6:30 a.m. Houston time on Monday, City of Miami Commissioner Manolo Reyes welcomed Acevedo to the city on Twitter.

"I look forward to meeting with you and sharing my thoughts of the well-being and safety of our community," Reyes wrote.

I want to welcome Chief @ArtAcevedo as the new @miamipd Chief. I look forward to meeting with you and sharing my thoughts of the well-being and safety of our community.#Manolo4OneMiami #Miami pic.twitter.com/pOytH0xjEF

Thank you Commissioner, I look forward to visiting with you and your commission colleagues. #RelationalPolicing

Acevedo was sworn into office in Houston on Nov. 30, 2016. He is married and has three children.

In Houston, he oversaw a department of 5,400 sworn law enforcement officers and 892 civilian support personnel.

Acevedo was 4 years old when his family immigrated to the United States from Cuba in 1968. He grew up in California and began his career in law enforcement with the California Highway Patrol in 1986.

Before coming to Houston, he served over nine years as the police chief in Austin, Texas, from July 2007 to December 2016.

Miami's mayor said that Acevedo is expected to start anywhere between four and eight weeks from now, depending on when he finishes in Houston.

Acevedo also said that before accepting the position in Miami, he had federal opportunities with the Biden administration and in Los Angeles.

"But my heart is here," Acevedo said of his new city.

MORE ON HOUSTON CRIME COVERAGE AND CHANGES IN HPD