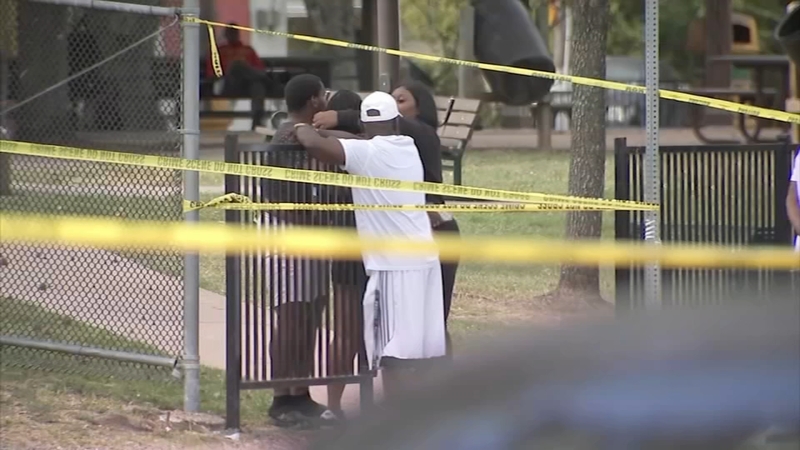 HOUSTON, Texas (KTRK) -- As 1 a.m. approached on the southwest side of Houston on a recent morning, Tori Boren, a Houston Crime Scene Investigator, was collecting evidence at the scene of a dead body for the fifth time in as many days.

"I had a double homicide [where] two guys [were] shot inside of a vehicle," Boren told 13 Investigates as we followed her work on a recent overnight shift. "The next night we had a homicide at a gentlemen's club, [then the next night] an aggravated assault where a neighbor shot the downstairs neighbor."

Boren's grim timesheet of Houston's homicides didn't count this latest scene, a small apartment where a baby died inside.

Boren is just 26 years old. She grew up in Spring and has worked Houston's roughest crime scenes for more than three years as a Crime Scene Investigator at the Houston Forensic Science Center, an agency charged with collecting and analyzing criminal evidence and separate from the Houston Police Department. These days it's worse than it's ever been.

"We're going to multiple scenes a night," she said.

She is one of 28 Crime Scene Investigators, a corps that hasn't grown at all since 2017, when there were at least 81 fewer homicides in the city. 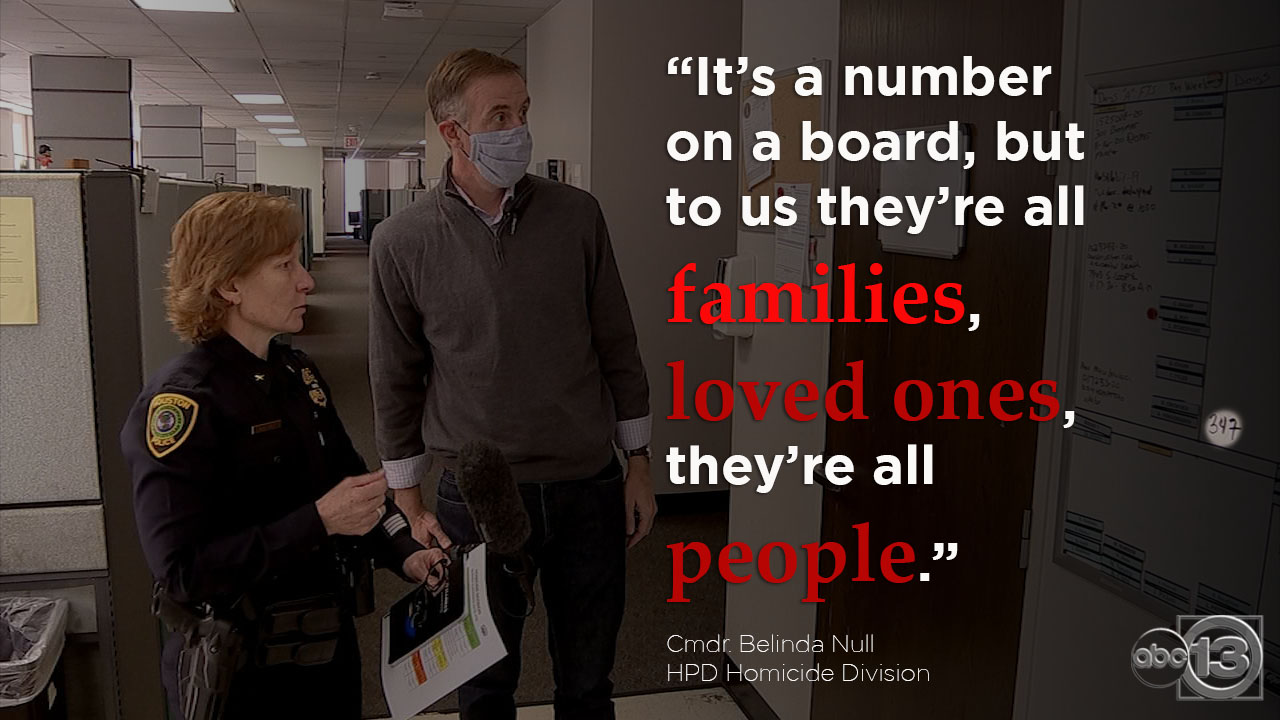 In 2020, murder is up more than 46% in Houston, not just because of well-known days with multiple killings, but because nearly every day brings at least one more.

When asked if crime is actually worse than what people see on the news, Boren didn't even wait to finish hearing the question.

The pace makes crime-solving harder, too, and that worries, Dr. Peter Stout, the CEO of the Houston Forensic Science Center.

"It really worries me because our folks are going from scene to scene to scene," Dr. Stout said. "They're coming in pretty much every shift and having to deal with another dead body."

The crime scene teams work every murder scene in Houston, but less than 1% of the more than 12,000 aggravated assaults. Those are crimes where a Houstonian is shot, stabbed or beaten and seriously injured.

A double murder on the west side of town Wednesday afternoon brought the city's murder total to 350 for this year, a number HPD's homicide squad said it hasn't had to deal with in decades.

On one of the nights 13 Investigates rode along with Stout's team, two Houstonians had been shot in separate incidents. Crime scene teams weren't called to either one and that's normal. There just isn't the manpower, Stout explained.

At the same time, the evidence teams are collecting so much more evidence that most of it can't be followed up on by HPD due to similar manpower constraints.

As we stood with Stout watching investigators lift fingerprints off cars from crime scenes, the CEO explained, "These people produce thousands of latent [fingerprint] lifts now that never used to get produced. That is 80 to 100 named leads - names - to HPD that they've never had before."

Thinking on it early that morning Dr. Stout exhaled, "You know in some fashion, it's already off the tracks."

Dr. Stout said his staff is backlogged on processing evidence. Boren said she and her colleagues are taking weeks more to produce reports from murder scenes since there is no time to write them while racing from scene to scene.

Days later, a double murder on Houston's west side brought the city's homicide total to 350 for this year. It's a total the Houston Police Department's homicide squad hasn't had to deal with in decades. Inside the Homicide Division's offices on the sixth floor of HPD's headquarters, a dry-erase board tallies the grim total every morning.

"It's a number on a board," HPD Homicide Commander Belinda Null told 13 Investigates. "But to us, they are families, loved ones, they're all people."

In 2020, the city is dealing with 44% more homicides than last year at this time. Null admits it is taxing her team, too. "It can be overwhelming," she told us in her first TV interview. "Unfortunately there is a finite number of, of officers we have, and the chiefs have to make decisions about how they need to disperse that manpower in order to be responsive to crime.

Ideally, I would say, could we use more people? Yes. Do we have as a department, more people to dedicate? That would be a decision that chiefs will make... I've asked for what the department can provide for us to be able to do the job we need to do."

Asked what she hears in response? "They're always looking at it," she assured us.

As for what is driving the spike, "[I get asked] every day," Null said with a smile before telling us it's not all COVID-related. The surge started before the pandemic set in.

"We're in unprecedented times, we are seeing unprecedented numbers," Null told 13 Investigates inside her sixth-floor office at HPD headquarters, "people and businesses are suffering. Individuals are suffering. People are isolated, stressed. I think people are quicker to temper, their tempers are quicker to flare. We've seen that in a lot of our cases where there's some type of altercation, which unfortunately is ending in, in violence, that we hadn't seen really prior to this."

As her team works to catch Houston's killers, the division's clearance rate sites a low point. Less than 46% of this year's murders have been solved. Null is quick to point out that is close to the national average. HPD stats show it is lower than the department's recent average.

The homicide division has just two additional detectives than it did in 2018 when there were at least 83 fewer killings. The division's Special Investigate Unit, which investigates officer-involved shootings, has added seven detectives, which Null says adds resources. 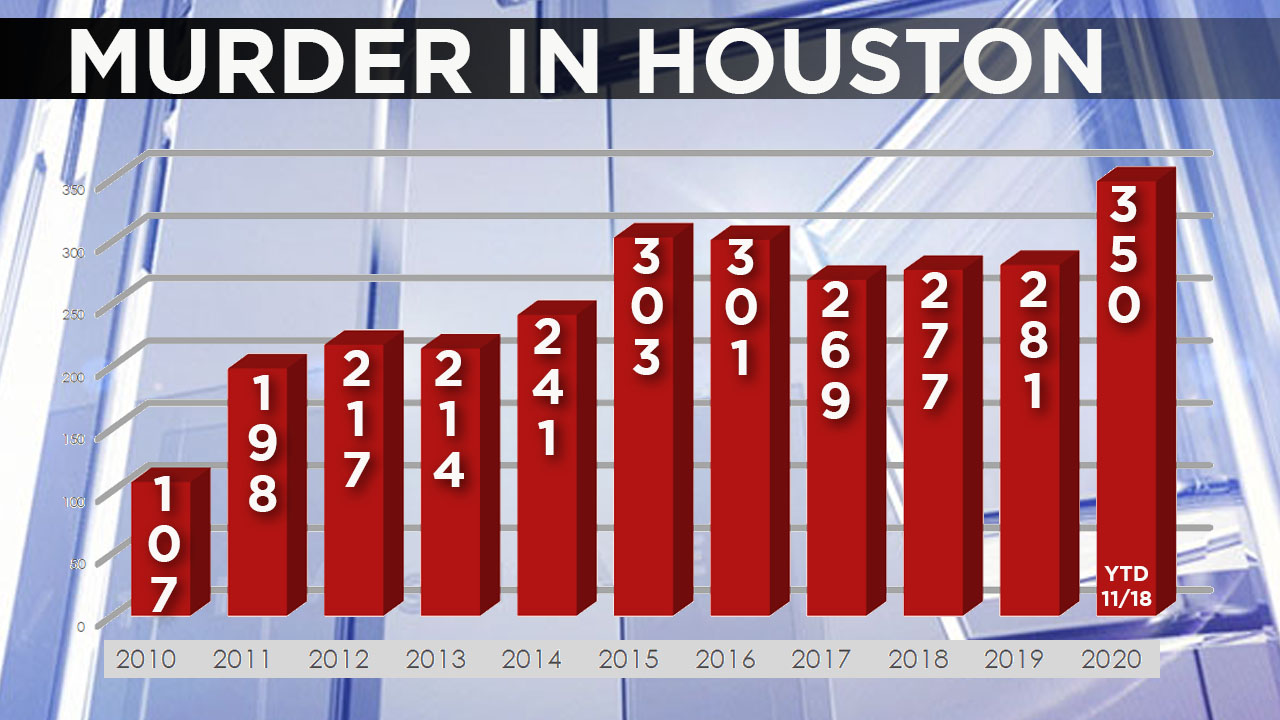 A five-year plan to double Crime Scene Unit staff is before the board of the Houston Forensic Science Center, but even if approved it would have to be funded by the City of Houston budget.

"We know how to do this stuff. This is eminently solvable," Dr. Stout told 13 Investigates. "It's a resource issue. It is a will issue."

In the meantime, Boren is back on the night shift facing yet another night collecting evidence of the violent things Houstonians are doing to one another at a pace not match since the late 90s. "HPD (is depending on us to get it right), the victim, the family of the victims, all of us. I mean, none of us want to screw up."

Asked what she hopes 2021 will bring, Tori Boren told us just a return to the "normal" level of violence in her hometown. Then she disappeared, climbing the steps to a second floor apartment to collect evidence of how a baby died hours earlier.