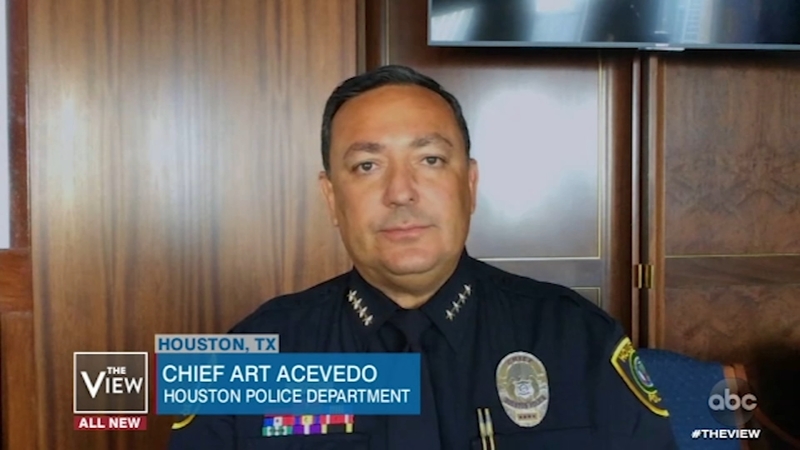 You can watch his full interview in the video player above.

Acevedo has been vocal about changes to policing in order to reduce incidents such as the one in Minneapolis involving George Floyd, who died in police custody as well as the one of Rayshard Brooks, who was shot and killed by a police officer.

Floyd's death sparked a movement involving millions of people around the world that have since been pressing about defunding the police. It's a movement Acevedo called "false equivalence." He adds that for one movement it means getting rid of the police, while for another it says to take away responsibilities of the police and give them to other entities.

Another one of the issues discussed while on The View was ending qualified immunity, which shields police officers from civil lawsuits. It's something the chief says the legal doctrine needs to be changed.

"We support about all the reforms that qualified immunity," Acevedo said. "We don't support eliminating."

Before his interview on The View, Acevedo did an exclusive interview with ABC13 discussing similar topics as well as bringing changes to the Houston Police Department and across the country.

"We need to assess if it is time to make some adjustments where officers that act in a willful and reckless manner, that some of those protections may be adjusted," Acevedo said on Wednesday during an interview with ABC13's Erik Barajas.

There are about 5,000 police officers on the force in Houston and this year, there have been at least six fatal shootings by HPD officers.

"I have been telling my people that I am going to hold them accountable for time, making sure that they slow down just a bit," Acevedo said. "Assess. Time is on your side, so utilize it. Create distance. It's time, distance, numbers, cover, and concealment. We instill that in our officers from day one."

Wednesday's comments came as law enforcement officers nationwide continue to come under scrutiny over a variety of highly publicized incidents, including the use of chokeholds.

"The more that you put into policy and the officer sees it in writing, the more it's going to be embedded into their DNA," Acevedo said.

Acevedo, like police chiefs across the country, has a balancing act between enforcing the law, keeping officers safe and earning the trust of the people. Accountability continues to be a focus that Acevedo hopes will meet those challenges.