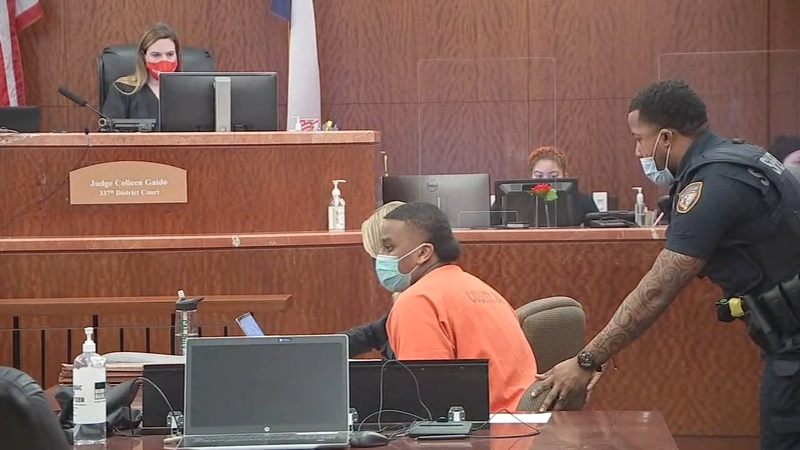 HOUSTON, Texas (KTRK) -- A man related to one of the suspects in the August Grotto Restaurant murders was denied bond when he went before a judge Thursday.

Anthony Jenkins, who is the brother of one of the suspects in the officer's death, is accused of telling his brother and other gang members, from behind bars, to carry out robberies so that they could secure money to bond him out of jail.

He is not accused of the murder of New Orleans Detective Everette Briscoe and his friend DJ Riculfy, but instead of orchestrating the deadly robbery from Harris County Jail via phone calls.

In new details exclusively obtained by Eyewitness News, the Grotto restaurant murder suspects may have gotten direction, allegedly from someone behind bars.

Jenkins is facing several charges, including engaging in criminal activity, felon in possession of a weapon and aggravated robbery. In court Thursday, a judge denied him bond.

She told the judge that she and Jenkins visited their newborn baby in the NICU while he was out on bond.

It was revealed that Jenkins was not wearing an ankle monitor and never registered for one.

Jenkins is scheduled to appear for a discovery hearing in three weeks.

On August 21, court documents note that Jenkins called his brother from behind bars. That's when he learned his brother and friends had been watching and following a man. They thought he was wearing expensive jewelry.

Jenkins reportedly told the men to have their pistols and be aggressive, "Don't play with him, pow in his leg, get right."

In a phone call 30 minutes later, court documents show Jenkins was informed that the deed was done, but the watch was fake.

Investigators say Jenkins encouraged his brother and the two other men to find more victims.

Within an hour is when Briscoe and his friends were targeted at Grotto Restaurant in the Galleria Area.

Friends of the victims say they still can't comprehend the senselessness behind it all.

"They should never walk the streets. That's a group of individuals whose overall objective is to destroy someone else's life," said Michael Jenkins, friend of Briscoe and Riculfy.

Frederick Jackson, one of the murder suspects, was also scheduled to appear in court Thursday.