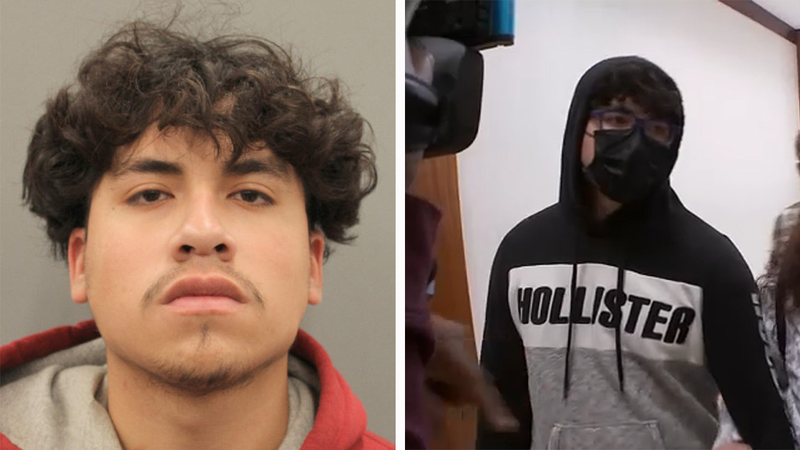 HOUSTON, Texas (KTRK) -- The 17-year-old boyfriend of a teen girl who was shot and killed in southwest Houston has been released from jail after he was arrested for her murder.

Family members heard gunshots on Jan. 11 around 9:30 p.m. and grew worried because they knew Alvarez was outside, walking her dog named "Peanut."

Her mother went outside and found her daughter shot 22 times in the 15400 block of Park Manor near Markwood Lane in an open greenspace, just a couple blocks from their home.

Police said Alvarez's gunshot wounds were consistent with her laying on her back on the ground at the time of her murder. Numerous shell casings were found around her body.

According to Houston police, Deleon was simultaneously in a romantic relationship with Alvarez and another girl.

When Alvarez learned about the other relationship, she went to meet Deleon in the neighborhood. That's when he shot her multiple times, police said.

Deleon was arrested Monday night after detectives worked with the community to track down witnesses and leads, HPD said.

When prosecutors requested his $250,000 bond, they said there were concerns that Deleon would be violent against Alvarez's family and retaliate.

Prosecutors said that recently, Alvarez saw Deleon with another girl at a quinceañera, and that made her mad.

Investigators said Deleon had been involved with the other girl for a couple years, and begged Alvarez not to tell anyone he and Alvarez had been seeing each other, sparking an argument.

That's when he reportedly asked Alvarez to meet him in the neighborhood to talk.

When he was arrested, prosecutors said Deleon told police that Alvarez was stalking his new girlfriend, which caused her to break up with him. His new girlfriend reportedly told Deleon to leave her alone on the night of the murder and blocked his calls.

Police said Deleon lied to them when he was arrested and said he didn't meet up with Alvarez and hadn't seen her, despite surveillance video and screenshots with evidence of the encounter.

Deleon's parents appeared with him in court Wednesday, where the judge reiterated that if it is discovered he is not living at their home, his bond will be revoked.

Deleon is scheduled to appear in court again on March 9.

Alvarez's family set up a GoFundMe page to help with funeral expenses.

NOTE: There have been discrepancies with the victim's age. HPD reported she was 16 years old, but family members told ABC13 she was 15.