Bond set at $90,000 for driver accused of running over 5, killing his mother in Katy area 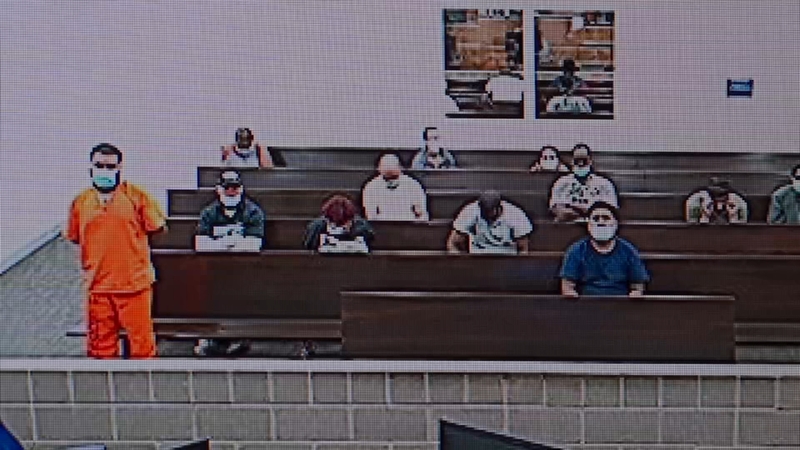 HARRIS COUNTY, Texas (KTRK) -- Bond has been set at $90,000 for the driver accused of intentionally driving into a crowd of people outside of a west Harris County restaurant, killing his mother in the incident.

Homer Lopez, 20, appeared for the first time before a judge overnight, more than a day after he was taken into custody in connection with the incident.

Lopez is accused of driving a vehicle that ran over five people early Thursday morning in the 1200 block of Mason Road, near the Katy Freeway.
Lopez's mother, Crystal Gomez, was identified as the lone fatality in the crash, Harris County Sheriff Ed Gonzalez said.

Beside Gomez, two people were rushed to the hospital, one of them admitted into surgery in critical condition. Two others were treated at the scene.

Lopez is charged with murder and two counts of failure to stop and render aid.

The incident started as a fight inside Pinchy's Tex Mex Restaurant among seven or eight people that spilled into the parking lot, according to deputies.

Citing early findings, investigators said it appeared the suspect drove into a crowd of people to break up a fight between two women.

District 4 responded to a auto pedestrian crash at I10 and Mason. 3 people struck by a vehicle in the Pinchy’s Tex Mex parking lot. 3 seriously injured 1 of those transported by air with life threatening injuries. Investigators are enroute to the scene. pic.twitter.com/GAbqk3GYN2

ABC13 was at the scene when deputies arrested Lopez in the fatal attack involving a blue Chevy Malibu. Investigators say he left the scene but later returned, and that's when he was arrested.

At about 1 am, at a commercial center parking lot at 1230 N. Mason @ Katy Freeway, a driver struck several individuals. One individual has been confirmed deceased. Two others transported to hospitals & two more treated on scene. The alleged driver initially fled the scene, but pic.twitter.com/YEMmJBr2J9

"Out of nowhere, you just hear a car crash, and we all looked that direction, and we didn't even see the girl. We saw the guy first," Jeff, a witness at the scene, recalled at the time. "We saw him holding his leg. He was on the hood of another car next to him."
"It was senseless. Like, why do that? It's senseless. It's sad and it's senseless. Especially nowadays," Jimmy Hernandez said. "That's what's sad. I have no idea what it was over. It was one of those things where, 'Hey, let's just go home.' Right? One of those things where something happened. 'Let's break it out and just go home.'"
Report a correction or typo
Related topics:
katycinco de mayopedestrian struckpedestrian killedfatal crashvehicular homicidepedestrian injuredrestaurantaccidentharris county sheriffs office
Copyright © 2021 KTRK-TV. All Rights Reserved.
PEDESTRIAN KILLED
Man killed after stopping car in middle of South Loop
Driver flees after naked man was struck and killed on East Freeway
Hitchcock Police investigating deadly auto-ped on Highway 6
Woman crossing feeder road hit and killed on S Beltway
TOP STORIES
Pregnant woman, man killed in NW Harris County park shooting
Deshaun Watson plans to report to Texans training camp, sources say
State Reps ask Abbott to change tune on mandate refusal
The heat continues today, but cooling downpours return next week
Fauci: CDC may back wearing face masks more
Texas lawmakers file bill to block UT from leaving Big 12 for SEC
ABC13 Houston names new morning anchor
Show More
Pelosi appoints 2nd Republican critic of Trump to Jan. 6 committee
Hero officers, bystanders save mom, baby pinned under car: video
Americans' optimism about US direction drops since May: POLL
Houston health care leaders sound alarm on spike in COVID-19 cases
7-year-old released from hospital after bullet hit her while she slept
More TOP STORIES News