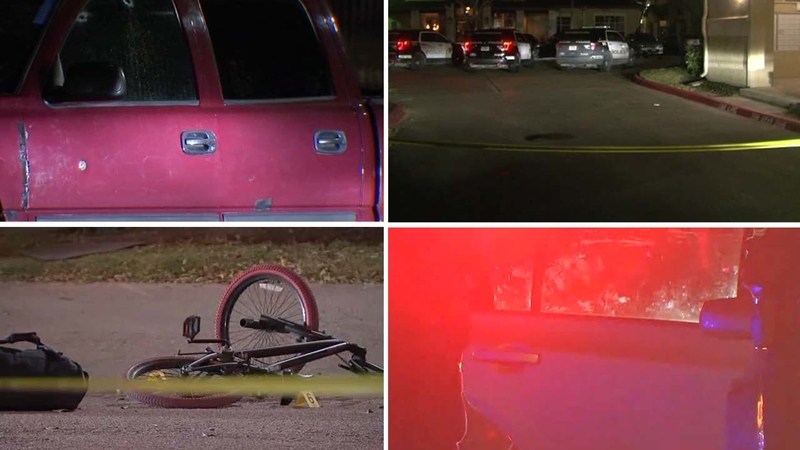 HOUSTON, Texas (KTRK) -- A violent, deadly night in the Houston area left 10 people shot, including two children, with one of those being just 1 years old. Six of the people shot were killed.

One of the shootings also involved a suspect wanted in the killing of a Cracker Barrel manager.

A suspect in a deadly Cracker Barrel shooting was shot and killed by deputies Monday at 6 p.m. in the 17700 block of W. Lake Houston Parkway, authorities said.

Over the weekend, Cracker Barrel manager Robin Baucom, 59, was shot and killed during an attempted robbery before the restaurant opened, and authorities had been trying to track down who did it.

Authorities say deputies had been watching the suspect all day and trying to make an arrest, when the man ran from them.

During the chase, the suspect reportedly made gestures as if he were pointing a weapon at the deputies. At that, the deputies opened fire and shot the man, who was taken to the hospital where he later died, authorities said.

Also in northeast Harris County, a man is accused of shooting his ex-girlfriend's new boyfriend in the back at 12700 W. FM 1960.

Deputies say the new boyfriend and the girlfriend were at an apartment when her ex and two other women showed up.

A fight broke out between all of the women, and when the new boyfriend tried to break it up, he was shot.

The victim was taken to the hospital.

Deputies told ABC13 the ex took off in a 2011 silver Cadillac CTS. He is facing a charge of aggravated assault with a deadly weapon.

Two children have been hospitalized after they were shot in the 5900 block of Selinsky Road at about 7 p.m.

Both kids, who police said are brothers, were taken to Texas Children's Hospital. They are expected to survive.

A third person, a man, was found to have been shot in the hand at a separate location.

Around 8 p.m. Monday, Houston police arrived to an apartment complex at 10100 Lansdale at the West Beltway and found a man dead in the parking lot.

Officials had little information other than there was a bicycle next to the man, but they are unsure if he was riding it.

No information was released on possible suspects or a motive.

Police believe it may have been a botched robbery that left two people dead in two different locations in east Harris County.

Officials say it began on Peppertree Lane, and surveillance video shows a man in a truck pull into a school parking lot and sit for about 15 minutes.

That's when a dark-colored Chrysler sedan with three suspects inside pulled up. Two people got out of the car and started shooting into the man's truck, deputies say. The man was killed.

Based on the video, police believe a woman was in the truck with the man who was shot, but she got out as the shooting started.

Authorities believe she may have been setting up the man.

At some point, she got caught in the crossfire.

Once the shooters realized she was injured, they pulled her into their car and drove off to Penn City Road.

That's where officers believe a getaway truck was waiting for the shooters, who ended up leaving the woman's body there.

The woman's family told police they were texted by someone, possibly one of the suspects, saying she had been shot and they could find her on the side of the road.

A father is accused of shooting and killing his 25-year-old son overnight.

Police responded around 12:30 a.m. to the shooting on Rollingbrook at Bob White and found the son shot three times in neck, chest and stomach.

HPD told ABC13 at the scene that the father and son got into a fight before the shooting.

According to officials, the son may have been suffering from mental illness.

The stepmother told police she heard gunshots. The father admitted to shooting his son.

Also in southwest Houston, in the 14000 block of Fondren near Cangelosi Road, police found a man lying face down in the parking lot of an apartment complex at 1 a.m.

The man was dead from a gunshot wound.

When officers arrived, they found a car door open, and believe the vehicle may have belonged to the victim.

Police say a resident heard a gunshot and called 911.