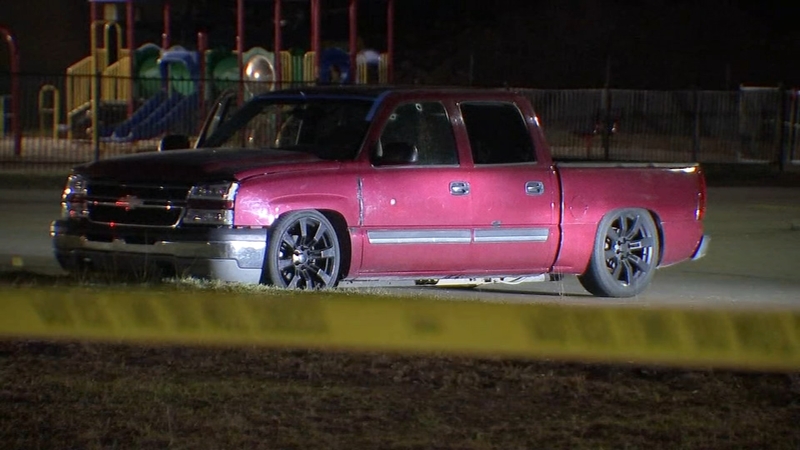 It was one of at least seven shootings across the Houston area overnight.

Police believe one of the victims is a possible robbery suspect. There are a lot of twists in the complicated case.

According to Houston police, video shows a man in a truck pull into a school parking lot off Peppertree Lane.

The man was sitting in the truck for about 15 minutes when a dark-colored Chrysler sedan pulled up with three suspects inside, police said.

That's when police said two people got out of the sedan and started shooting into the man's truck.

Investigators believe it may have been a botched robbery, though they don't exactly know what the suspects were after.

The man in the truck was shot and killed, HPD said.

Northeast officers are on a shooting at 1400 Peppertree. One victim was found deceased upon arrival. #hounews CC9

From watching the video, police believe a woman could have possibly set the man up for the robbery.

Police believe the woman was in the truck with the man who was shot and killed, but got out as the shooting started.

At some point, she was caught in the crossfire. Once the shooters realized she was injured, they pulled her into their car and drove off.

That leads to the second scene on Penn City Road near Waldine, where the woman's body was found in that same sedan by her family around 11:40 p.m. Monday.

The family told police they were texted by someone, possibly one of the suspects, saying she had been shot and they could find her on the side of the road.

When they arrived, the suspects left in a black pickup truck that police said could possibly be a Nissan Titan.

EMS attempted to render aid, but the woman was pronounced dead at the scene.

"When she's shot, she's outside of the truck, and it looks like the individuals that accidently shot her knew her," Sgt. Josh Horn said. "They came, got her, put her inside a red vehicle. That red vehicle is the vehicle that we believe is out here right now."

At the second scene, ABC13 crews saw police moving four people between patrol cars. They weren't handcuffed, but did have evidence bags on their hands.

The sergeant on scene said it is just a precautionary measure and the individuals are witnesses who are being questioned.

The investigation is still active, and police are still looking for the two shooters and the driver, but there are still a number of questions they are trying to answer.