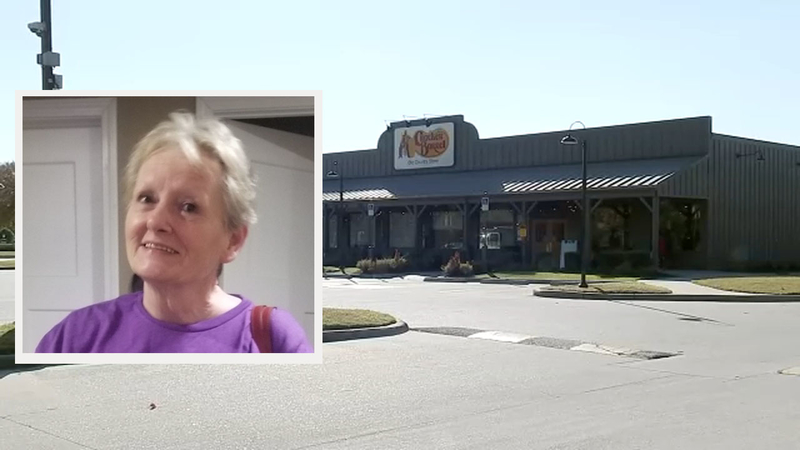 HOUSTON (KTRK) -- A gunman accused of shooting a Cracker Barrel employee to death over the weekend in what deputies call an attempted robbery is still at large, according to authorities.

Family members identified the manager killed as 59-year-old Robin Baucom. She worked at the Cracker Barrel on the North Freeway and Airtex Drive for 34 years.

On Saturday morning, deputies said Baucom was at work before the restaurant opened, like any other day. Another employee, waiting to be let in around 6:15 a.m., was approached by two men in a Dodge Charger. According to deputies, the man in the passenger seat got out of the car and tried to steal the employee's purse.

Baucom came to the employee's rescue and let her in while pushing back on the door to stop the man who was forcing himself inside. That's when the suspect took out a gun and shot Baucom, who later died at the hospital, deputies said.

While it's a decision that cost Baucom her life, it's one her family members don't wish happened any differently, because ultimately it embodied her character. Her family, friends, and co-workers, said she would protect anyone she cared for.

On Sunday, a vigil was held at the Cracker Barrel where dozens of people paid their respects to Baucom.

"When I saw the parking lot was full of people, everyone was hugging everyone, heard stories from customers and employees, it told me on a much deeper level how much she meant to people and how much she's going to be missed," Gail said. "It just touched me."

Baucom leaves behind a husband, three children, and three grandchildren. Her co-workers and customers became like her second family. Gail said she tried to tell Baucom to change locations because of the crime in the area.

Over a month ago, the Harris County Sheriff's Office launched a $2.6 million initiative aimed at reducing crime in the hot spots of unincorporated Harris County.

The initiative splits up 96 deputies between seven different high crime areas. The Cracker Barrel on the North Freeway and Airtex Drive is located in one of those hot spots.

"If there's anything that can be done to put more policemen on the streets in these hot areas that are full of crime, I beg you to do that," Gail said.

Deputies say the suspect drove away in a 2018 or newer model metallic gray Charger.