The chase lasted about six minutes before the officer collided with a woman on Fairbanks and West Little York.
KTRK
By Brhe Berry and Miya Shay 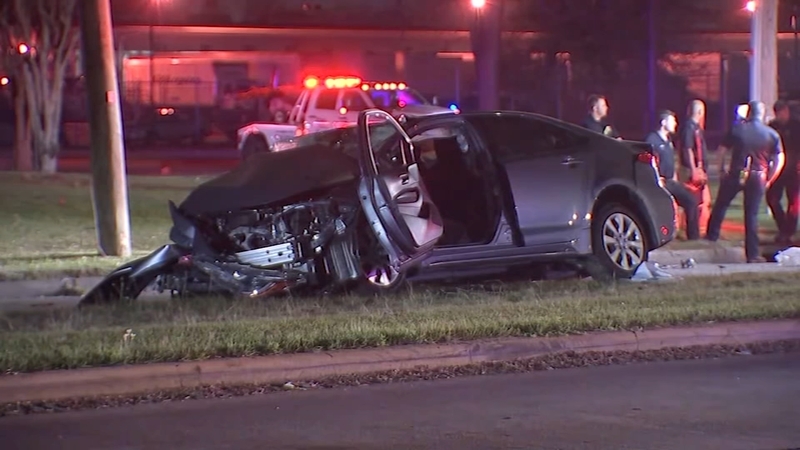 HOUSTON, Texas (KTRK) -- A police officer crashed into an innocent driver while trying to chase a suspect in northwest Houston overnight.

According to Houston police, the officer was doing proactive patrolling as part of the Overtime Crime Reduction Unit and noticed a suspicious vehicle shortly before 1 a.m. on Tuesday. The car is reportedly linked to a crime involving stolen catalytic converters.

The officer saw the car run a red light, and when he pulled the suspect over, he refused to roll his window down and took off, police said.

The chase lasted about six minutes before the officer collided with a 53-year-old woman in a Toyota Corolla at Fairbanks and West Little York. The suspect got away.

The crash, which occurred at 1:06 a.m., caused the officer to run off the road. His vehicle caught fire, and the woman he collided with had to be extracted from her car, according to HPD.

"I got hit in the intersection. My car is on fire," the officer could be heard reporting on radio traffic. "I'm OK. I can't tell about the other car."

Video from the scene shows just how badly smashed both vehicles are. Firefighters could be seen rescuing the woman from her car.

The 33-year-old officer, who has been with the department for three years, was not seriously hurt, according to HPD.

"That was his primary concern, as soon as they had the accident, was the safety of the citizen he had the accident with," Assistant Chief Thomas Hardin said. "He's a little shaken up, wanted to make sure she was OK, but he's thankful, so far, that it appears she's alright."

This is the fifth crash involving a local law enforcement officer responding to a call in 16 months. All four other crashes killed a bystander.

On Nov. 21, 2020, former Houston Police Officer Matthew Valdez hit and killed Walter Cooper in the 7300 block of Ley Road while responding to a police call. Valdez was indicted, but he is taking his case to trial, which is scheduled for August.

On Dec. 4, 2021, Michael Wayne Jackson was hit and killed as he walked along Reed road to his barber. An HPD officer was responding to a chase that had just ended.

On Dec. 26, 2021, Officer Christopher Cabrera killed 75-year-old Charles Payne along the 4600 block of N. Shepherd. He had just left church.

On Jan. 12, 2022, a Harris County Sheriff's deputy killed mom Autrey Davis in a seven-vehicle crash while chasing suspect Devonte Williams at the corner of Laura Koppe and Lockwood.

All of those cases remain under investigation.

The suspect vehicle police were chasing is reportedly linked to a crime involving stolen catalytic converters. The suspect got away.