'Justice for Diamond': Family and community call for 17-year-old murder suspect's bond to be revoked

Frank Deleon Jr. is charged in the murder of 15-year-old Diamond Alvarez. He was released from jail on a $250,000 bond.
KTRK
By Courtney Fischer 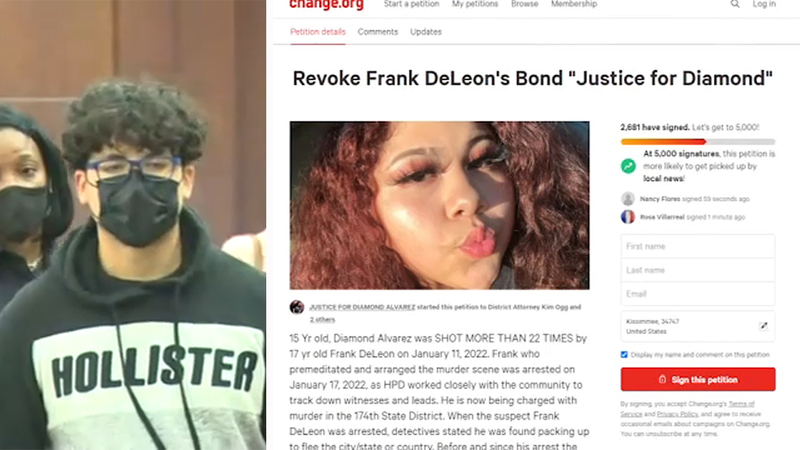 She was shot 22 times on Jan. 11, allegedly by her ex-boyfriend, Frank Deleon Jr., according to HPD.

Deleon was arrested on Monday and bonded out of jail in less than 48 hours.

Alvarez's mother says Houston isn't safe with Deleon back on the streets.

As Anna Machado prepares to bury her 15-year-old daughter, she says it hasn't totally hit her that she's gone.

"Happy. Full of life. With her nonsense. With her happiness. With her smile," Machado described Alvarez.

Alvarez was shot 22 times while walking her dog, "Peanut."

Police say the dog ran home after the girl, who was found by her own family lying in the street, was shot and killed.

He reportedly texted Alvarez to meet in her southwest Houston neighborhood the night of her murder.

Alvarez had been upset after finding out that Deleon was involved with another girl. Prosecutors say Deleon begged Alvarez not to tell anyone about their relationship, but she was angry.

Machado says she doesn't want to hear the details about what happened. She can't bear it. Instead, she's is focused on one thing -- getting Deleon back in jail.

When prosecutors requested the 17-year-old's $250,000 bond, they said there were concerns that he would retaliate against Diamond Alvarez's family.

Alvarez's family said Deleon lives with his parents, in the same neighborhood as them, just a few blocks away.

For perspective, his bond was set high. On average, people charged with murder get about a $50,000 bond, a legal analyst told ABC13.

"I was in shock. I couldn't believe it. I still can't believe it. Why are you letting loose a monster like that? Someone that just executed someone. A little kid. My baby," Machado said.

Machado doesn't understand, and neither do thousands of other people, it seems.

More than 2,500 people have signed a petition on Change.org to revoke Deleon's bond called, "Justice for Diamond."

"Before and since his arrest the family of Diamond Alvarez has been receiving threats and has been harassed (sic) multiple times at their home and they now fear for their safety," the petition's page states. "Judge - Hazel B. Jones, granted Bond of $250,000.00 and the threat and tension has only gotten worse for the family, neighborhood and the City of Houston."

A public viewing for Alvarez will be held at Forest Lawn Cemetery on Almeda-Genoa Road today from 4 to 7 p.m.

Her funeral will be held on Friday.

The teen accused of shooting his girlfriend to death 22 times has posted bond, but concerns are still on the rise about the amount he had to pay to get out.