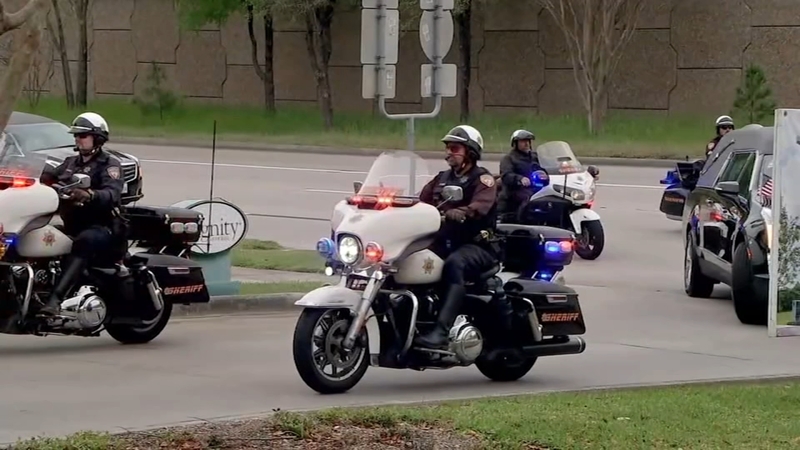 State to seek death penalty in murder of HCSO deputy

The procession started at 8 a.m. from the medical examiner's office on Old Spanish Trail and ended at Brookside Funeral Home at 13747 Eastex Freeway.

Traffic Alert: procession for HCSO Deputy Almendarez begins this morning at 8am. He will be transported from the Harris County Institute of Forensic Sciences on Old Spanish Trail to Brookside Funeral Home, located at 13747 Eastex Freeway. Primary roadways include 288 & Eastex Fwy

Shortly after the procession, the hallway on the 19th floor of the Harris County Criminal Courthouse was crowded with deputies.

Deputy Darren Almendarez's colleagues wanted to be in court when the first of three defendants, 23-year-old Joshua Stewart, made a court appearance. The judge denied bond during the hearing.

Frederick Tardy, 17, and Federias Clark, 19, are also charged with murder. Both are scheduled to appear on Tuesday.

Tardy appeared for Monday's hearing, but a defense attorney could not be located in time, so the hearing was pushed back a day.

HCDO President David Cuevas said he'll be there every step of the way because this case is personal.


"I've known Darren 20 years. We went to the academy together," said Cuevas. "To see him lay down his life, for these three criminals who didn't give a damn about anybody but themselves, and they could just steal and get in a confrontation with our brother."

All three suspects are accused of attempting to steal the Almendarez's catalytic converter in the parking lot of Joe V's Smart Shop on Thursday evening.

Investigators said as Almendarez and his wife walked back to their truck, they caught the men in the act when one of the three men started shooting.

On Monday's court hearing, we learned that Clark was the driver of the getaway car and he allegedly was the first to open fire at Almendarez.

Clark allegedly warned Tardy and Stewart to get back in the car as Almendarez approached his truck. The men had cordless cutting tools.

As the suspects drove away, Almendarez continued shooting at them as more shots may have been fired from the suspects' car, ABC13 learned in court.

The three men are believed to be involved in a bigger crew that steals catalytic converters.