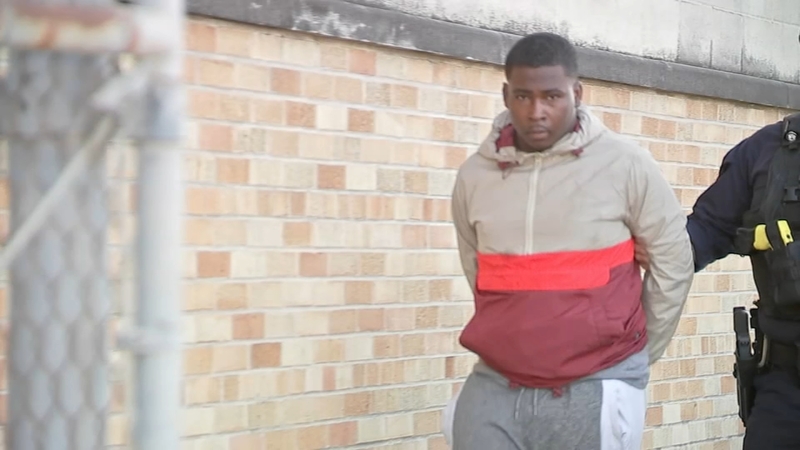 HARRIS COUNTY, Texas (KTRK) -- Three men have been charged with capital murder in the death of off-duty Harris County Sheriff's Office deputy Darren Almendarez, who was shot in a grocery store parking lot.

The three men are a part of a bigger crew that steal catalytic converters.

ABC13 has exclusive video of Fredrick Tardy, 17, being taken into the Harris County Sherriff's Office. He remained silent when asked if he had anything to do with Deputy Almendarez's murder.

Sheriff Ed Gonzalez said Almendarez was shot while confronting suspected car burglars outside the Joe V's Smart Shop in the 2900 block of FM 1960 at Aldine Westfield at about 8:35 p.m. on Thursday.
"We got one male shot in the chest," first responders could be heard reporting on radio traffic.

Arrest update, shooting of deputy: Seventeen (17) year old Fredrick Tardy has been arrested and charged with Capital Murder in the death of Deputy Almendarez. #HouNews https://t.co/gPYAmqIFoP

Deputies said Almendarez and his wife were walking back to their truck when he saw a black, four-door Nissan Altima backed up to his vehicle. Two men were under his truck, and it appeared that they were trying to steal the catalytic converter, officials said.

Gonzalez said Almendarez told his wife to stay back as he approached the suspects' car, which had three men inside. That's when one of the three men started shooting.

The deputy was hit several times but was able to shoot back, hitting at least two of the suspects.

The suspects then sped off.

Almendarez was transported to Houston Northwest Hospital, where he was pronounced dead.

Two of the suspects, 23-year-old Joshua Stewart and 19-year-old Fredarias Henry Clark, arrived at the same hospital in Altima from the parking lot. Both men had gunshot wounds.

Stewart is in jail and is expected to appear in probable cause court early Saturday morning, officials say.

In 2019, Stewart had a charge in Harris County for unlawful carrying of a weapon that was later dismissed, records show.

In November 2020, Clark was convicted of criminal trespassing and later unlawful carrying a weapon that was later dismissed.

Video from the scene shows just how much gunfire there was. The windshield of the suspects' car was covered in bullet holes.

With heavy hearts, we mourn the loss of Harris County Sheriff’s Office Deputy Darren Almendarez, 51. An agency veteran of 23 years, he served in our auto theft unit for the past year. Our thoughts & prayers go out to his wife, children, his extended family, colleagues & friends. pic.twitter.com/PvzsBQfa48

"At a personal level and as sheriff, that's evil. We've got evil individuals that are out there," Gonzalez said of the shooting.

Almendarez was a 23-year veteran with the sheriff's office. He was assigned to the auto theft division.
EMBED More News Videos

An off-duty Harris County Sheriff's Office deputy has died after he was shot in a grocery store parking lot, Sheriff Ed Gonzalez said.

"Because I know him personally, professionally, I can say he would have done the same thing," Chief Deputy Edison Toquica said. "Ironically, it just happened to have been his truck."

"I am deeply saddened by the death of Deputy Darren Almendarez. We mourn with our brothers and sisters at Harris County Sheriff's Office, and we extend our support to them as they grieve the loss of the 23-year veteran. Law enforcement is an inherently dangerous job, but what happened is unacceptable. It is a terrible day when a family trip to a grocery store ends in violence and loss of life. Deputy Almendarez will be remembered as a loyal public servant who died while protecting his wife. I ask everyone to join me in praying for the deputy's family, his coworkers, and for the senseless violence to end."

Gov. Greg Abbott also released a statement, saying that the state would be ready to provide all resources necessary to bring justice to the family and loved ones of Deputy Almendarez.

"Deputy Darren Almendarez lost his life while answering the call to serve and protect his fellow Texans. This tragedy is a heartbreaking reminder of our law enforcement officers' sacrifices both on and off duty. The State of Texas is ready to provide all resources necessary to bring justice to the family and loved ones of Deputy Almendarez. I ask that Texans join Cecilia and me in prayer for Deputy Almendarez's family and the continued safety of all of our law enforcement officers across the Lone Star State."

Deputies investigated a second crime scene less than a mile down the road at a Circle K, where investigators taped off the parking lot and towed away an SUV.

At that scene, authorities collected a gun they thought was related. However, ABC13 has learned that the weapon is not connected to this shooting based on surveillance video.