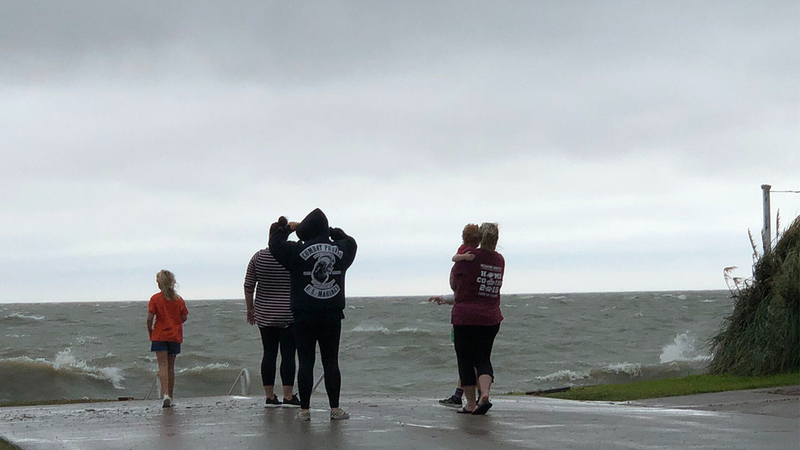 LA PORTE, Texas (KTRK) -- Despite Tropical Storm Beta's recorded winds of about 50 mph Monday morning, many La Porte residents said they're riding it out because they've been in this situation before.

During live storm coverage Monday morning, ABC13's Courtney Fischer recorded winds of about 11 mph near Sylvan Beach around 6:45 a.m., nearly 12 hours ahead of the Beta's expected landfall. Some residents were taking advantage of the opportunity to get outside while the weather was still cooperating.

Over in Surfside, ABC13's TJ Parker saw one man paddle board to the store to buy Red Bull.

"We knew there was going to be a storm surge," said Justin Dupree. "It's all good. We're just going to stay at the house, hanging out all day."

Our TJ Parker spotted this man paddle boarding his way to the store! Press play to hear what he had to say.

Some residents near La Porte talked about Beta with their perspective from Hurricanes Harvey and Ike, in terms of evacuations.

"A lot of people rode Harvey out. With Ike, people evacuated, and we weren't let back in for several days after the storm," said one resident.

Several counties in southeast Texas issued voluntary evacuations or asked businesses to close early to make sure their residents are prepared ahead of Beta's landfall.
Another resident said he was more willing to evacuate.

"I'm definitely not one of those guys that likes to be a rock star when the waves are crashing and the wind is blowing hard," one Galveston local told Eyewitness News. "So when you guys leave, I'm leaving."

SEE RELATED STORY: Take a look at the evacuation orders issued in your area ahead of Beta

The Galveston County Office of Emergency Management has teamed up with the state to get high water rescue vehicles and Humvees.

In Hitchcock, crews arrived Sunday evening to get vehicles and a boat in place.