Compassion and companionship: A look inside HPD's K9 patrol unit 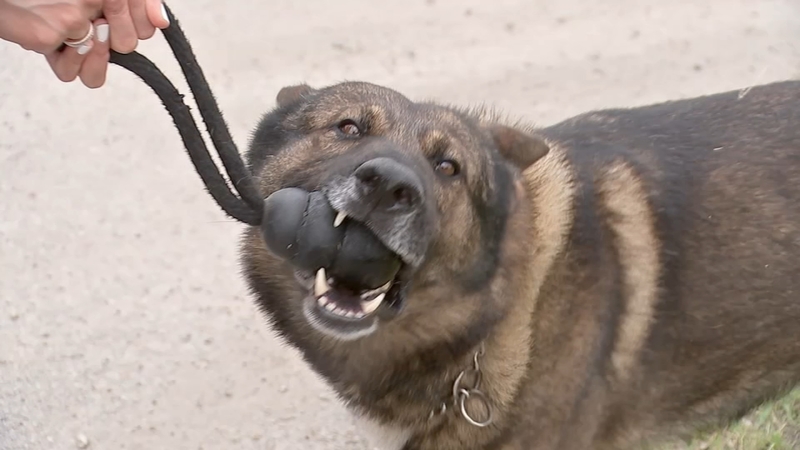 The HPD K9s are with their officers 24/7. They go to work with them, and then the officers take the dogs home when their job is done.

Charly got to meet Bandit, Fox and Blitz, three of the 19 members of HPD's K9 patrol unit, at the department's training facility of Houston's north side.

They are loved, respected and always ready to play. But don't be fooled, in just one command they are ready to work.

Last month, Fox sniffed out a hiding suspect who crawled underneath a car.

ABC13's SkyEye cameras captured the hunt for a suspect accused of leading police on a chase and stealing a car.

"The things that one dog can do, it would take numerous officers to do," Sgt. Stuart Red said.

Video captured the moment Fox caught a scent and dove under a parked car.

At one point, the chase suspect hid underneath a truck and was found by a K-9 unit. Hit play to see how it all unfolded after the afternoon chase ended near Stella Link.

"You don't realize it, but your body is cranking out chemicals," Officer Barnette said.

Underneath the parked car was the hiding suspect, who was quickly apprehended and led away in handcuffs - another job well done by the expertly-trained and highly respected HPD K9s.

The officers and their K9s meet weekly at the HPD K9 training facility to perfect their skills.

That is on top of the initial 16-week training program that helps to bond the dog to their officer.

"It's still the best job on the department, I think," Barnette said. "For one thing, they give you your best friend, and you get to take him to work everyday."

The K9s then hit the streets, putting themselves in the face of danger to protect us as well as the officers.

The narcotics and airport units also have dogs on their teams, along with the patrol K9s.

In total, there are almost 50 dogs working for HPD in various areas.

The dogs travel inside special patrol vehicles and a safety system will trigger if it gets too hot inside.

The Houston heat can also be a concern while working out in the field.

"Our dogs, you can imagine working in August with a fur coat on," Zoppi said. "They're good for about 20 minutes."

What about those necessary bathroom breaks?

"We all have those favorite spots to take our dogs to walk them," Sgt. Red laughed.

And yes, officers' body cameras do capture some tender moments out on patrol.

"And it's very fun to watch my officers discuss things with their dogs in the car as they drive around," Sgt. Red said.

Sgt. Red admits there is some worry when the dogs go into potentially dangerous situations.

"We train for this as well as you can, mentally and emotionally prepare for it," Sgt. Red said. "But you do know that there is a substantial risk with what we're doing."

Many of the K9s on the force are provided through donations. Adopting and training them can be very expensive.

The dogs' vet care is also provided through donations to make sure they are well taken care of and healthy.

When it's time for a K9 to retire, they are able to stay with their officer as a family pet.

Explosive detection K-9s Tyson and Jackie put on their uniforms and posed for some adorable new university ID photos.