Tiger's handler, who is accused of murder, reveals plans if he kept animal 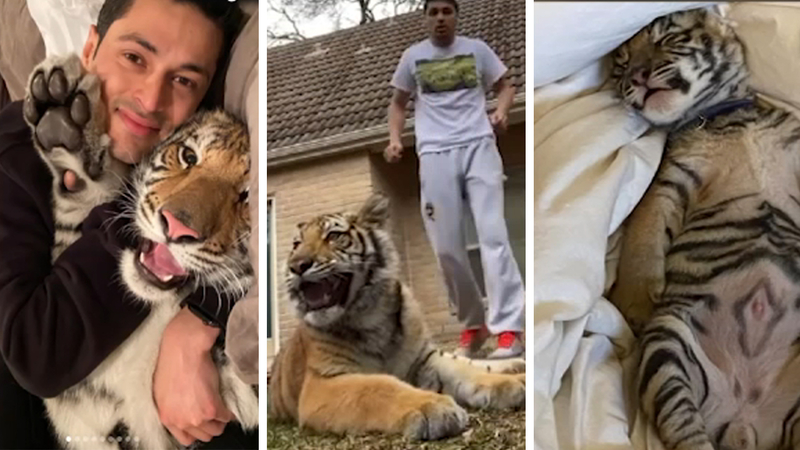 HOUSTON, Texas (KTRK) -- The man who made national headlines with a pet tiger in west Houston has written a new tribute to the big cat.

Cuevas has been in the center of the case ever since neighbors saw the big cat escape last month.

Cuevas was out on bond for a 2017 murder case in Fort Bend County. His bond was revoked after the tiger escaped and he was charged with evading police, but he's now back out on bond once again.

India was finally located and is now at Black Beauty Ranch in Murchison, Texas.

India seems to be feeling right at home at his new habitat. Adorable video from the Humane Society shows him splashing in a pond and playing with toys.

I want to share a little something about our beautiful, loving, caring boy India Papi. To the world he's just a pretty tiger, to me he's my best friend, my teammate, my workout buddy, my dance partner, my happiness. India was my pride and joy. Taking care of him and raising him to be the happiest tiger in the world was the highlight of life. Spending time playing and running around with India made me feel like I was living a dream.

Every time I saw him I sang his little song, "INDIA PAPI, iiindia papi, INDIA papii!!" And every time before we played or before I fed him or gave him his bottles, I would tell him "Besitos India, Besitos Señor," and he would close him mouth and tilt his head up to kiss his me, he later learned to put his paws on my shoulders and kiss me while standing. He is so intelligent at such a young age it was impressive. I remember how he would cry like a baby when he was a little cub and the only thing that he'll want is to be picked up and kissed continuously. He loved balls and especially popping balloons. I would blow up 20 balloons and let him pop them all. On days that I didn't practice MMA at the gym, India would be my running buddy and when we were tired, I would lay next to him and talk to him. One thing I always promised him was that very soon I would buy our land and build him a beautiful enclosure with a swimming pool so we can both swim on those hot Texas days. He probably heard me tell him that every week. I would promise him that I would do everything I can to raise him to be a old beautiful tiger and that he'll never apart from us.

I was so close to buying our land. I had found the perfect 22 acre property 45 minutes from Houston, we were weeks away from having everything finalized. It was a life long dream that was starting to become a reality, all I ever wanted in life was to marry my long time best friend - which I did, become the UFC world champion and now raise this beautiful little tiger who stole a piece of my our hearts. My wildest dreams seemed to be one step closer.

And on Mother's Day May 9th , 2021, my entire life flashed before my eyes as I see a man pointing a gun at India, I couldn't fathom loosing him so I put myself between him and bullet knowing I would die for this little cat who I called my best friend.

From that day a piece of my heart was shot.

India, although I might never get to run with you again, never get the chance to swim with you. Never hear your chuffs in person, Never dance with you and make funny videos to send to your mom. I thank you for the love you showed us, the memories we made, your kisses, I'll always hug your pillow at night and I'm very grateful for the 1 in a million bond we shared. That will forever live within me and through the grace of God I can of day make good on my promise to you.

We love you with all of our entire hearts little boy, always and forever."