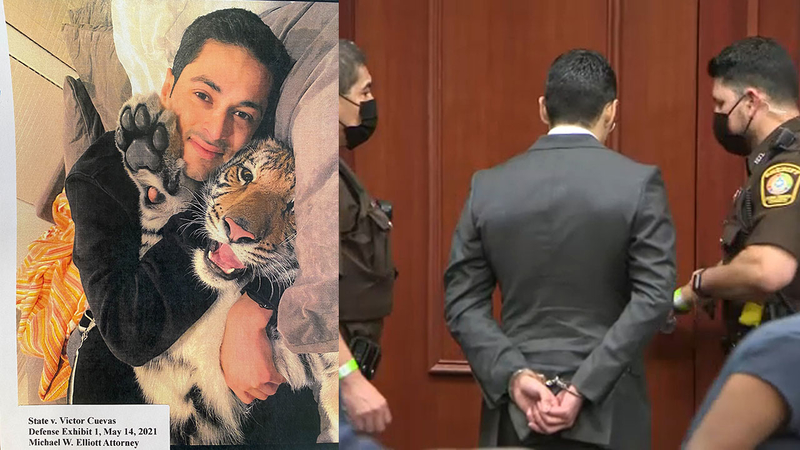 HOUSTON, Texas (KTRK) -- India the tiger has reportedly been found, according to Houston police.

UPDATE on “The Tiger”:
We are happy to report that the missing tiger seen in a Houston neighborhood last week has been found and appears to be unharmed.

The 🐅 has safely arrived @BARC_Houston where a media briefing will be held about 9 p.m. at BARC at 2700 Evella. #hounews pic.twitter.com/yNLF0bPsbb

A Fort Bend County judge has revoked the original bond of Victor Cuevas, the man linked to a missing tiger in Houston.

Cuevas, who was arrested for evading police in the tiger case, was placed in handcuffs at the end of a daylong bond revocation hearing as part of an unrelated murder case from 2017.

It's not immediately known if Cuevas' camp will put up the money for a bailout, which follows one from Wednesday when he got out of Fort Bend County jail on the evading warrant.

The outcome was a remarkable one for Cuevas who arrived at the courthouse in a Bentley. Since that flashy arrival, testimony by his wife on Friday revealed the luxury vehicle was rented through a friend.

"The world is watching," the attorney of a man linked to a missing Houston tiger said before the press Friday.

According to HPD, the department, along with BARC, has received 200 to 300 calls regarding the tiger since it was first spotted Sunday.

"So far he is, he and his lawyer, uncooperative right now. He is in a bond hearing this morning in Fort Bend County to revoke his murder bond," Commander Ron Borza said. "I'm hoping that occurs, and maybe if he goes to jail, he'd be more cooperative with us. We'll see how that goes."

According to Borza, officers are familiar with a group of people across the city involved in exotic animal trade.

On the sixth day of a tiger's disappearance, Houston police believe the animal named India may be in danger.

As for the court proceeding, the usually fairly straight forward hearing became heated very quickly. The first witness that prosecutor Christopher Baugh called was a probation officer who testified that Cuevas had an ankle monitor and violated his curfew.

The second witness called by prosecutors is Wes Manion, the off-duty Waller County Sheriff's sergeant seen on video trying to contain the tiger. His time on the witness stand has been contentious. Both sides objected to one another over and over again, often over seemingly minor elements of the case.

Cuevas' attorney tells ABC13 he does not believe the evading charge against his client is justified, and says just because you leave the scene of where something occurred does not mean you are evading.

Houston police say after India was spotted, and Cuevas was seen on video bringing it inside a home, he got in a white vehicle and left the scene at a high rate of speed with the tiger.

Officers attempted to pursue him, but say they lost sight of Cuevas.

"We are not even sure who is even driving the white vehicle. It leaves. They say Victor Cuevas is the driver and there is a tiger in there, but you can't see it in the video," his attorney, Michael Elliott, said. "You see him leaving. You don't see any police chasing him. You don't see any red lights. You don't see anybody saying, 'I'm a police officer, you need to stop.' It's not evading. It's not a crime."

There are two big questions Friday. Will Victor Cuevas be sent back to jail? Where is India the tiger?

It has been six days since India was last seen.

Carole Baskin said she worries about the fact that no one knows where the tiger is. If she sounds familiar, Baskin became a household name after she appeared in the true crime documentary "Tiger King: Murder, Mayhem and Madness."

"This cat has no fear of humans." After finding fame in the show 'Tiger King,' Carole Baskin, CEO of Big Cat Rescue in Florida, talks to us about the changes that need to be made so loose tiger incidents don't happen again.

Since Cuevas' arrest, Elliott insists his client does not own the tiger.

Elliott claims the 9-month-old tiger is owned by another man nicknamed "D," who has texted "death threats" to Cuevas. ABC13 was shown the texted threat, but could not independently verify it.

A suspect is now behind bars after he was seen taking in a tiger that was spotted in a west Houston neighborhood. But his attorney claims his attorney did nothing wrong and the tiger is not his.