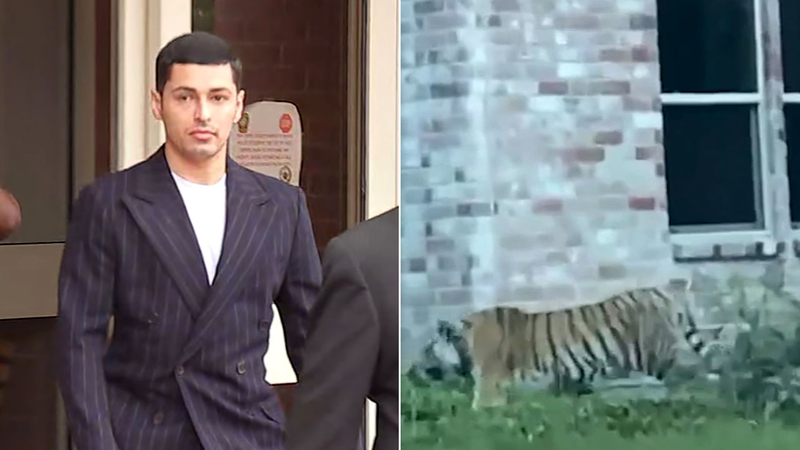 HOUSTON, Texas (KTRK) -- The man linked to a missing tiger that was seen roaming in a west Houston neighborhood over the weekend bonded out of the Fort Bend County jail Wednesday afternoon.

Cuevas' attorney and mother are among those who awaited his release.

Cuevas was booked into the Fort Bend County jail for evading arrest in a motor vehicle, and his bond was set at $50,000 in connection to the case with the Houston Police Department. Cuevas is also charged with murder stemming from a 2017 incident near his Richmond-area family home.

But his attorney maintains that he acted out of self-defense in the incident four years ago.

"From the very inception of these allegations, Victor Cuevas has claimed, and very consistently claimed, that this was not a murder at all, that he was defending himself from unlawful use of force by the victim in the case," said attorney Michael Elliott.

Meanwhile, Carole Baskin said she worries about the fact that no one knows where the tiger is. If she sounds familiar, Baskin became a household name after she appeared in the true crime documentary "Tiger King: Murder, Mayhem and Madness."

WATCH: 'This cat has no fear' Carole Baskin weighs in on tiger on the loose

Meanwhile, in various videos posted about the tiger, the suspect Cuevas was seen ushering the tiger back into the house he lived in. Shortly after that, Houston police said Cuevas put the tiger in a white truck and took off. HPD lost Cuevas in a short chase.

Since Cuevas' arrest, his attorney insists his client does not own the tiger.

Elliott claims the 9-month-old tiger is owned by another man nicknamed "D," who has texted "death threats" to Cuevas.

ABC13 was shown the texted threat, but could not independently verify it.

SEE ALSO: Murder suspect who was linked to tiger in west Houston has been arrested on evading charges

The whereabouts of the tiger remain a mystery.