ERCOT said it expects the highest power demand to be Friday. Officials expect to have an excess of 15,000 megawatts available.
KTRK
By Jeff Ehling and Nick Natario 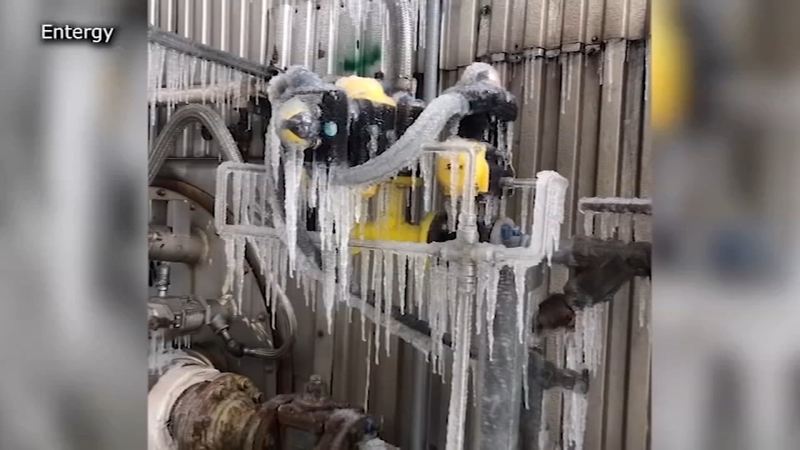 HOUSTON, Texas (KTRK) -- Texas officials have issued a winter weather advisory for the state ahead of a "very substantial" arctic cold front blowing in this week.

The Electric Reliability Council of Texas (ERCOT) said it is anticipating a high demand for power Wednesday through Sunday due to the forecasted cold front.

The front is expected to bring winter weather and precipitation, with possible icy conditions.

"ERCOT will deploy all the tools available to us to manage the grid effectively during this winter weather," officials said in a statement. "We are coordinating closely with the Texas Division of Emergency Management, the Public Utility Commission and elected officials - as well as electric generators and transmission and distribution utilities - to keep Texans informed throughout the week. We have ordered power plants across the region to postpone planned outages and to return from outages already in progress."

Abbott ensured that the state would remain in close contact with the public in the coming days about what is happening and what to expect.

"We are utilizing every applicable state agency to make sure that Texas will robustly respond to this extreme cold winter storm that is going to be sweeping across Texas," Abbott said.

He said the Texas Public Utility Commission spent the last year inspecting power generators, and "99% have passed inspection and are fully operational."

In addition to the prep work, the PUC will be staffed 24/7 during the cold front and will provide updates about any outages.

He explained that the state has a certain amount of megawatt power available across the state on any given day.

Although some people will lose power, Abbot said it isn't always a grid issue.

He said weather conditions like ice on power lines and trees could also cause outages.

"That doesn't mean that there are problems with the power grid in the state of Texas," Abbott warned. "It means that, for a short period of time, a particular neighborhood may be without power."

ERCOT said it expects the highest demand from the grid to be on Friday morning. Currently, officials are expecting that they will have an excess of 15,000 megawatts of power available, even at the time of highest demand.

RELATED: Here's how you can check on the Texas grid in real-time
EMBED More News Videos

In 12 to 18 hours, Abbott said TxDOT is expecting winter precipitation that could cause severe road conditions.

Abbott warned that there will be "thousands and thousands of miles" of Texas roadways that will be extremely dangerous to travel on.

He said treacherous road conditions could put lives in danger, and drivers should proceed with caution and stay home when necessary.

TxDOT has already deployed 4,000 personnel to prepare roads. In some areas, pre-treatment began Sunday. In other areas that got rain Monday, like Houston, pre-treatment will begin Tuesday.

Texans can visit drivetexas.org to learn in advance what driving conditions will look like in certain areas.

In addition to energy and roadway preparations, state officials have also stationed food and water in regions across the state expected to be impacted by severe weather.

"Be aware of, and follow all advice, to make sure, over the course of the winter storm, you avoid carbon monoxide poisoning," Abbott advised.

Texas Division of Emergency Management officials reminded Texans that now is the time to take care of the four P's: People, pets, pipes and plants.

It's almost been one year since the last major freeze left thousands of Texans in the cold, without power.

Since last year's winter storm, the state has made improvements to the power grid. But is it enough? Here's what the experts think.

More than 200 people across the state died after the power grid failed, according to a state report.

This time around, there are some things in our favor.

First, it is not going to get as cold as it did during the deep freeze in February 2021, and the cold temperatures aren't going to be statewide.

Meteorologists also predict that it isn't going to last as long.

Meanwhile, the state has spent a year making improvements to the power grid.

Officials said it could take another year or two for all the work to be finished.

With another winter storm on the way, ABC13 asked an energy expert what he thinks about the power staying on. He said right now, the answer depends on how bad the storm gets.

"We get those types of winter storms, maybe every 10 years. If it happens to come in the next two or three months, I would worry about the state of Texas' grid," UH Chief Energy Officer Ramanan Krishnamoorti said. "If it happens next winter, I think we will be better off."

"The reality is some of these power generation companies lost tens or hundreds of millions of dollars last year, and those are the types of things all companies pay attention to and they don't want a repeat of those scenarios," Bradshaw explained.

Another change compared to 2021, is the amount people will be charged for power during the winter season. In 2021, Griddy customers received massive bills.

The company sold customers power on wholesale prices. Bradshaw said the majority of those companies are gone.

Most customers use a fixed, or variable plan. Bradshaw said even though power prices may rise this week, it shouldn't impact customers.