By Mitchell Ferman and Carla Astudillo, The Texas Tribune How the 2021 winter storm happened

Fixing Texas' power grid was about the only thing Republicans and Democrats in the legislative session seemed to agree on earlier this year. Power companies were in the hot seat, as millions of Texans who endured a week of subfreezing temperatures with no power demanded sweeping, multibillion dollar improvements to prevent another deadly disaster - and lawmakers promised action.

But by the end of the legislative session, if Texas' top power companies were aggrieved by the way they were treated by the Legislature or any of the new laws passed targeting their industry, they didn't show it.

Texas elected officials can't receive campaign donations during the session, but after it ended in May, they were showered in cash by the energy industry - even more than usual for a group known for its deep pockets and generous campaign giving.

From June 21 to June 30, after the legislative fundraising blackout ended, five of the largest and most prominent companies in the Texas power grid supply chain - Calpine, Centerpoint, NRG Energy, Oncor and Vistra - or their top executives collectively donated about $497,000 to state elected officials and political groups. That's more than twice the $207,000 they gave during the same period when the legislative session ended in in 2019, according to a Texas Tribune analysis. A large chunk of that cash was driven by Oncor, Texas' largest transmission and distribution electric company, with many big donations coming from the company's executives.

Politicians get huge donations from the energy industry after the 2021 session
After a fundraising moratorium is lifted following the legislative session, officials have about two weeks before the end of June to raise money, which can result in them raising eye-popping amounts in a short amount of time. Gov. Greg Abbott, Lt. Gov. Dan Patrick and lawmakers who were heavily involved in the power grid legislation saw some of the biggest boosts in donations from the energy industry following the regular legislative session that ended in May. 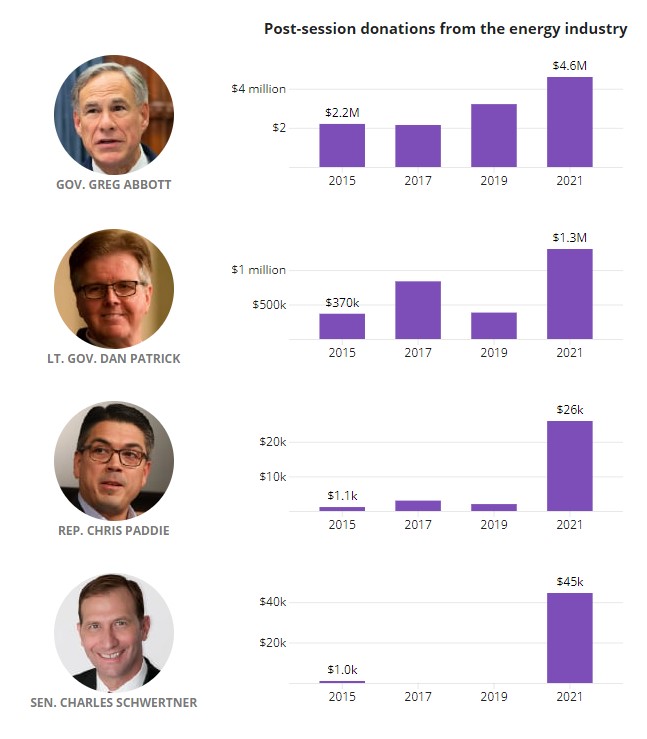 Over that same short stretch in June, 11 prominent oil industry leaders, including billionaires Kelcy Warren, S. Javaid Anwar and Douglas Scharbauer - all three whom could not be reached for comment - combined to contribute about $3.2 million to Texas elected officials, up from about $2.2 million over the same period following the previous legislative session in 2019. Warren's company Energy Transfer declined to comment on his behalf.

For some energy experts, the increase in donations for the officials at the close of the session looks like a reward for not passing more stringent regulations, and raises questions about whether lawmakers let the oil, gas and the broader energy industry off easy for its massive failures.

"Gas producers got a pass by Texas policymakers," said Michael Webber, professor of energy resources at the University of Texas at Austin. "Making a million-dollar political donation to reward the government for its light touch and encourage the government to continue turning a blind eye to price gouging and windfall profits while hundreds of people die seems like a good return on investment."

A spokesperson for Oncor said the company "believes in actively participating in the political process." CenterPoint said: "In this case, CenterPoint Energy Political Action Committee made public contributions to support members of the Texas Legislature who had announced their intention to run for re-election, regardless of party affiliation." A Calpine representative said its CEO, who made up the bulk of contributions tied to the company, donated money "as he develops relationships with these members directly." The other two companies did not respond to requests for comment.

SEE ALSO: Texas' 1st pass at a fix from winter freeze almost out of time

Gov. Greg Abbott, who is heading into a reelection year in 2022, benefited most from the flood of June campaign donations from the energy industry.

Abbott received about $4.6 million from oil, gas and broader energy interests, his largest haul ever from those groups in the post-legislative session fundraising period following the four regular legislative sessions during Abbott's tenure as governor.

Those donations included $1 million from Warren, cofounder of a pipeline company that made $2.4 billion from the winter storm, according to a report from Bloomberg. Warren has given Abbott $250,000 donations almost every year since he won the governor's office in 2014.

"Governor Abbott represents all Texans, and that's what he takes into account every day as he works on behalf of the Lone Star State," spokeswoman Renae Eze said.

Other lawmakers who saw some of the largest spikes in funding from the energy industry were those who authored the power grid legislation and chaired the committees that heard the bills.

State Rep. Chris Paddie, R-Marshall, chair of the powerful state affairs committee in the House, was among those lawmakers.

After the 2021 regular legislative session, energy industry donations totaling $26,000 for the period made up 88% of Paddie's campaign contributions over just the last 10 days of June.

"Absent that storm, his contributions would have been different," said Bill Miller, a longtime Texas political consultant and lobbyist. "The storm, as bad as it was, helped him on his bottom line for contributions."

Paddie received contributions from Oncor; Vistra, the state's largest power generation company; and NuStar Political Action Committee, an oil and gas group. Paddie has received thousands in contributions from these entities in election years, but never this amount immediately after a legislative session.

A spokesperson for Paddie did not respond to questions.

Paddie was among a chorus of elected officials from the governor on down demanding answers and solutions for why Texas' grid was on the brink of total collapse in February. There was a series of finger-pointing and falsehoods from state elected officials who wouldn't accept responsibility and falsely shifted blame to renewable energy sources as they vowed to fix the grid.

The Legislature ultimately passed a bill - shepherded by Paddie in the House and state Sen. Charles Schwertner, R-Georgetown, in the Senate - that requires power generation companies to prepare to withstand extreme weather conditions. But the bill didn't set a hard deadline for when the upgrades need to be complete and it stopped short of detailing how the state would enforce and incentivize the process called weatherization.

Critics said this and other storm response bills spearheaded by these lawmakers also failed to provide direct assistance to people harmed by February's power crisis or to help Texans reduce electricity use to take pressure off the grid during extreme weather.

Schwertner went from receiving 3% of his overall campaign contributions from the energy industry in the fundraising period after the 2015 legislative session to the industry making up about 32% of his contributions in 2021. The amount of money the senator fundraised from energy interests jumped from $1,000 to $44,500, the Tribune found. A Schwertner spokesperson did not respond to questions for this story.

State Sen. Kelly Hancock, R-North Richland Hills, who led much of the upper chamber's response to the storm that left millions of Texans without electricity for days in subfreezing temperatures, also got a boost in funding.

More than a quarter of Hancock's contributions in June came from energy interests, about $53,500 - the most he has ever received in a post-legislative session period. This is up from 19% after the 2019 session. Hancock also has ties to the energy industry in his full-time job as a business owner. His chemical logistics company serves the oil and gas industry, among others. He did not respond to a request for comment.

Oil and politics have been entwined in Texas for more than a century, since wildcatters hit the first gusher at Spindletop back in 1901. Oil grew to become the state's signature industry, rich oilmen and companies started showering politicians with money and a romance blossomed. Oil and gas taxes now boost the state budget.

"The twisted roots between the oil and gas industry and Texas lawmakers is almost as old as the Capitol building itself," said Brandon Rottinghaus, a political science professor at the University of Houston.

The Bush family's origin story in Texas revolves around oil and gas, and money from the industry has funded much of the family's political fortunes in the state ever since they arrived in West Texas.

Abbott has run a similar playbook as Perry and has taken it to a different level, Rottinghaus said.

Overall since 2014, Abbott has received about $30 million from oil, gas and other energy interests, which is about 18% of his $166 million total raised in that time. Four out of the top 10 individual donors to Abbott are oil and gas men.

Just before the energy donations poured in for Abbott in June, the power grid operator asked Texans, mid-heat wave, to conserve power and turn their thermostats to 78 degrees for a week in order to reduce electricity demand because significant power generation was unexpectedly offline.

The warnings led to renewed calls for the Legislature to take more urgent action to fix the power grid. During that week, Abbott assured Texans the grid was in better shape than ever.
Not long after, Abbott released a list of issues lawmakers needed to address in July during a special-called legislative session. The power grid was not included.

Leading up to Abbott's decision, Lt. Gov. Dan Patrick pressured Abbott in public statements that issues related to the grid needed to be on the agenda. Patrick's calls came after he tried to assert himself prominently in responding to the winter storm by demanding leadership changes at state regulatory agencies and sparring with one Abbott-appointed regulator on the senate floor.

Most of Patrick's energy industry money received in June was driven by oil executives.

Patrick spokeswoman Sherry Sylvester said: "No one has been tougher on the energy sector and more proactive for ratepayers this session than Lt. Governor Patrick, who moved immediately following the February storm to call for the resignations of both the PUC board and ERCOT, both of which were fully reformed through Senate Bills 2 and 3."

Disclosure: Calpine, CenterPoint Energy, NRG Energy, Oncor, University of Texas at Austin and University of Houston have been financial supporters of The Texas Tribune, a nonprofit, nonpartisan news organization that is funded in part by donations from members, foundations and corporate sponsors. Financial supporters play no role in the Tribune's journalism. Find a complete list of them here.