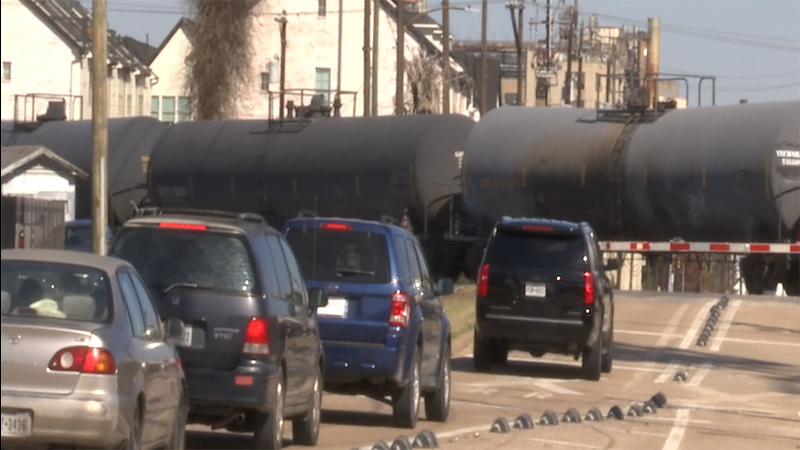 HOUSTON, Texas (KTRK) -- Houston-area residents have voiced concerns for years about stopped trains blocking major roads. Representatives with Union Pacific Railroad met with Houston City Council to see what can be done to address the problem.

Stalled or stopped trains blocking major roads has become an ongoing issue throughout the Houston area and in Houston's East End. Local business owner Jose Benitez told ABC13 he sees the impact to residents and businesses every day.

"It creates a lot of traffic," Benitez said. "People can't go nowhere. It can be 20 minutes, 30 minutes, maybe 45 minutes sometimes. It's a major problem."

K'Twon Franklin was just 11 weeks old before his life was cut short due in part to an issue that has lingered in a rural Texas town.

"It's very frustrating for our fire crews," Pena said. "We try to get to the scene as quickly as we can but a lot of times we can't anticipate when the train is going to be blocking the most direct access route."

"To be a good neighbor," Pena said. "We have to come to the table with the rail industry and figure out how we're going to move forward appropriately."

Clint Schelbitzki, Assistant Vice President of Public Affairs for Union Pacific Railroad, said the disruption to the supply chain and the increased demand for shipments during the pandemic has potentially played a role in the increase number of incidents where stopped trains are blocking intersections.

"Some of what we're doing as Union Pacific Railroad is investing," Schelbitzki said. "We've invested tens of millions of dollars in our terminals here to be able to speed up train traffic into and out of the city that should help reduce the blocked crossings and overtime improve the situation much better."

Schelbitzki said he encourages residents to report a stopped train to the transport company by calling 1-888-877-7267.

Our 13 Investigates team has tracked complaints about trains stopped on the tracks for years. In 2021, complaints to TxDOT were up 90 percent statewide, but more than that in the city of Houston. Complaints in the city almost doubled from 64 in the first five months of 2020 to 127 in the same time period last year. More than 90 percent of them are about Union Pacific trains.

One person said they had to sit for five hours once and another time parked half a mile from home and walked.