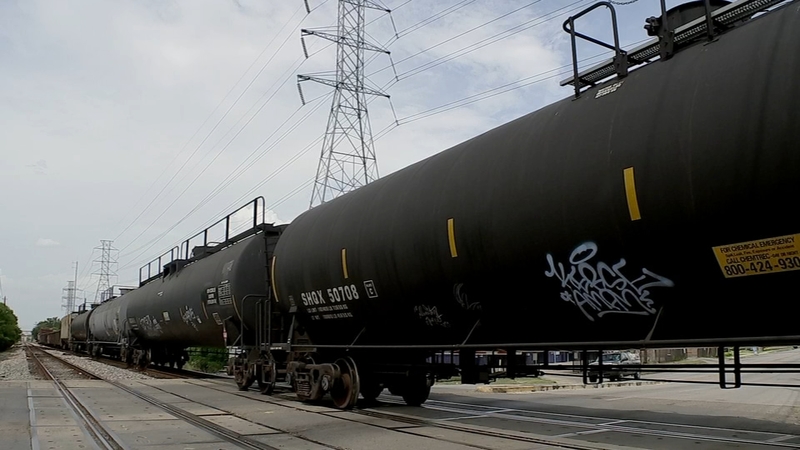 HOUSTON, Texas (KTRK) -- Jose Carpio was working on his 2014 gray Ford Mustang when it fell onto his face and chest and pinned him from the waist up.

His mother and girlfriend called 911, but as the ambulance arrived on June 23, his mother watched it back up and turn around. It had to find another route because a train was blocking the intersection next to his home in the 5300 block of Jefferson Street.

"Nobody could really get to me. Like, the neighbors got to me first and luckily for (me), they gave me some, you know, some hope," said Carpio, 24. "They gave me CPR, so they gave me some time for the ambulance to go around (the train)."

Statewide, nearly 600 people have reported stalled trains to the Texas Department of Transportation since 2018, and crossings in Houston were responsible for more than 25 percent of those complaints.

While looking into the frequency of stalled trains, 13 Investigates learned the City of Houston doesn't track those specific complaints from residents.

A spokesperson for Union Pacific, which operates those tracks, says the company has its own database tracking concerns about trains blocking intersections for extended periods of time. ABC13 Investigates asked for that data, but Union Pacific wouldn't share it.

Keep scrolling to see what happened when 13 Investigates stopped by a railroad crossing in East Houston. Full investigation continues below the interactive.


Across Houston, residents have reported trains being stopped for upward of six hours. Others say they've seen school buses and ambulances that were forced to find other ways around a blocked crossing, and that trains block certain intersections at least four times a week, sometimes more than once a day.

Overall, an analysis of the data TxDOT provided confirms what neighbors suspect -- the problem is getting worse.

Nicole Bacon was held up by a stalled train for 54 minutes before turning her car around to find another route. She told 13 Investigates she leaves for work an hour early in case a train is parked on the tracks, and even then she's still late at times.

"Sometimes the train is parked so long, the kids trying to get to school or coming home from school, they'll climb either under the train or if they can get over it, they'll go over it," Bacon said. "That's extremely dangerous."

District I Council Member Robert Gallegos, who was born and raised in his district, said he's used to horns blowing and trains blocking intersections. He said it has gotten worse over the past year. And, with lengthy trains, that means if one is blocking an intersection, it's likely blocking several others on the surrounding streets.

"Just because they're used to it doesn't mean that they're okay with it. They're very frustrated," Gallegos said of his constituents. "We've received calls the trains had been blocking these intersections for over two hours and that's a concern because of emergency vehicles. If there's a fire, they have to figure out where in the heck are they going to go, because this train is blocking several intersections."

Union Pacific, which operates a railroad track in Gallegos' district, declined an interview with 13 Investigates.

The company sent a statement saying the track near Carpio's home is considered an industrial area, where both Union Pacific and BNSF trains enter and exit a yard south of the intersection.

"Union Pacific works to minimize blocked crossings caused by stopped trains. Our goal is to keep trains moving, and we are changing operating plans in order to move rail shipments more efficiently. We also are examining areas experiencing prolonged blocked crossings to find ways to alleviate them," the statement reads.

Gallegos met with Union Pacific in May. Two days after 13 Investigates reached out to the company to inquire about issues at various crossings, Union Pacific sent Gallegos a letter blaming some of the stalled trains on "recent weather-related incidents" and an increase in demand, leading to longer trains.

"Houston's industrial sector is thriving and many businesses are served by rail," the letter says. "As the industry continues to grow and more people move to the area, you naturally see the impact on the roads and rails."

Gallegos said he's working to see if the city can better track residents' complaints about blocked crossings, but even if they can, Houston can't force the trains to move.

In Texas, there is no state law limiting how long a railroad company's train can block a crossing.

Earlier this year, the Federal Railroad Administration and U.S. Department of Transportation announced efforts to study the issue.

"Currently, there are no federal laws or regulations that specifically address how long a train may occupy a crossing, whether idling or operating at slow speeds," according to a June 14 notice by the Federal Railroad Administration. "There are potential safety concerns with crossings that are blocked by trains. For instance, pedestrians may crawl under or through idling trains. Also, emergency response vehicles and first responders may be significantly delayed from responding to an incident or transporting patients to a hospital."

The federal agency is currently soliciting comments from residents across the nation. They've already received 125 public comments and the deadline to submit a formal complaint here is Tuesday.

After his accident, Carpio said he realized the trains that block the intersection in front of his home for hours aren't just inconvenient. Although first responders say they were able to reach him within minutes, he still thinks it's a public safety issue.

"(I'm) pretty angry because they never really seem to move," he said. "I really don't want it to happen to anybody else."

ABC13 Investigates met with Carpio on July 15 along the train tracks next to his home. Halfway through the interview, a train drove by and stopped one street down.

One driver fell asleep at the wheel while he waited for the train to pass, while several pedestrians didn't think twice before climbing over the train to get across the intersection and the railroad crossing bell blared the entire time.

"Every day," Ramos said. "It happens morning and night."