5 things you need to win a Mutton Bustin' contest 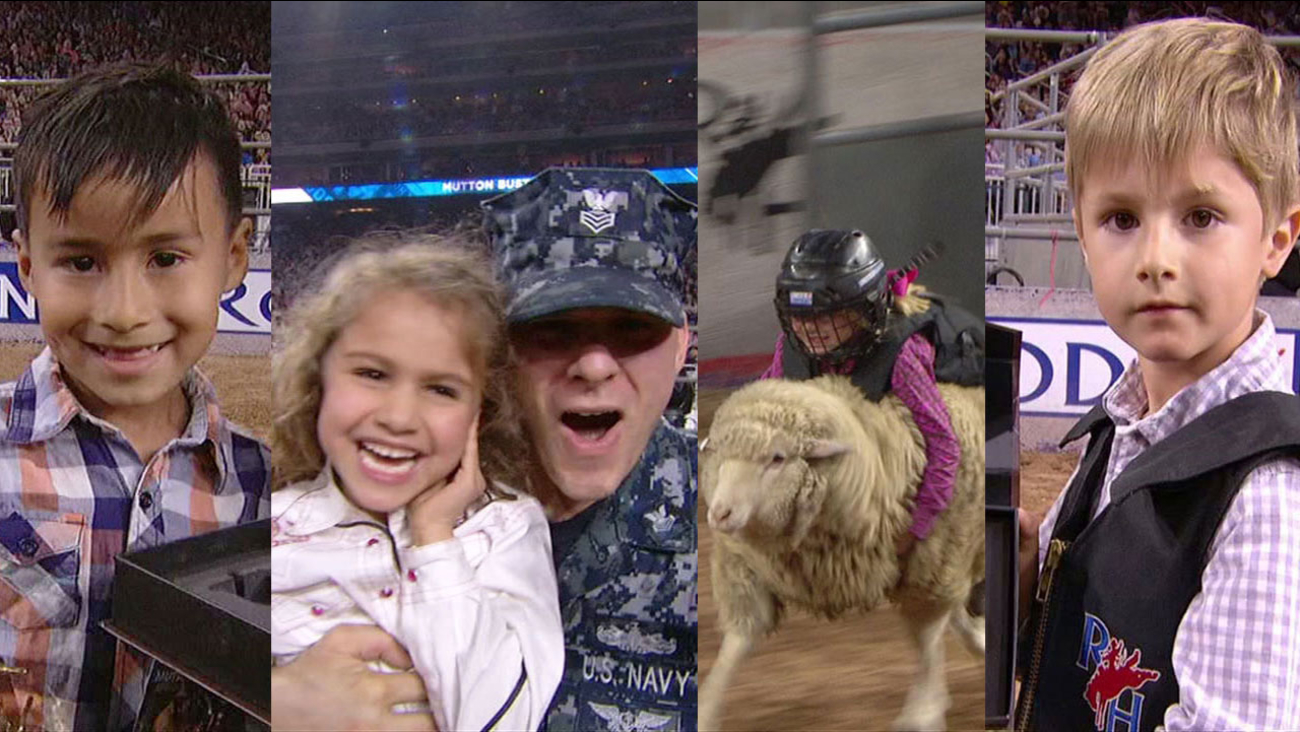 HOUSTON (KTRK) -- For those parents who saw the Mutton Bustin' competitions at RodeoHouston this year and said, "My kid could do that," chances are you are right.

With practice and a plan, you have better odds at winning, and the time is right to start getting ready for next year's RodeoHouston.

We watched closely as cute kid after kid took home their champion belt buckles. We looked at their form. We studied their moves. We listened closely to their exit interviews.

Kali Hammack is already making a name for herself (and making Texas proud!)

Here are a few things we noticed as similarities among the winners of the 2017 competition:

They all had a practice partner (with a strong back)
Most of the RodeoHouston Mutton Bustin' contest winners said later they practiced by jumping on their dad's back, or in the case of Kali Hammack, of Jersey Village, her "crazy brother Caleb."

If you dream of winning at Mutton Bustin', try to find someone with some time on their hands and a strong back. You can practice grabbing ahold of their shirt and keeping your balance.

One competitor's dad even built an impressive homemade simulator at their Fort Bend County home last fall to get ready.

They knew where to put their feet
It's not just about grabbing onto the sheep's fur. Winning is about your footing.

We analyzed the victors who were able to reach the herd on the other side, and all of them begin the race out the gate with their feet firmly tucked underneath their sheep.

This may be harder for smaller competitors, but it seems most 5 and 6-year-old winners were able to pull their legs together for some extra balance.

Last night, they saved the best for last during RodeoHouston's Mutton Bustin' contest

They weren't shy or distracted by the crowd
Each of the winners of this year's Mutton Bustin' competition performed for crowds of 65,000 or more people every night. That's a lot of potential distraction.

While Kenzie Smith, of Lipan, Texas, couldn't say how she won, we think it had something to do with keeping your head down, your fingers tightly gripped to the fur of the sheep, and trying to stay upright.

Kenzie Smith wasn't quite sure how she won, but it sure made her dad proud!

Ridge Flundra's dad may be a bronc rider, but he said he hopes to be a bull fighter one day

They found inspiration in heroes and dreams
A lot of the 2017 Mutton Bustin' winners at RodeoHouston told how they wanted to be like their favorite rodeo stars, their dads, or about their future ambitions.

Winners can visualize themselves winning, it appears. JJ Leonard, of Houston, said he hoped to be a businessman, but later realized he might want to play football on the same field as J.J. Watt.

Winning can also get you up close and personal with those heroes who motivate you to win. Ridge Flundra, of Alberta, Canada, was able to rub elbows with bull fighter Chuck Swisher after winning the contest.

They smiled big and were very polite
Nice guys really do finish first, despite what naysayers might tell you. Lane Adcock, of Rayville, Louisiana, proved that when he took his 5-year-old self all the way to the winner's circle.

Lane said "yes ma'am" to every question he was asked, showing off his good manners for all the world to see.

Meantime, Zoe Fahey, of San Diego, Calif., stole our hearts with her adorable curls and big smile during her post-victory interview.

Following these five things won't guarantee a win, of course, but it will get you closer to claiming a champion belt buckle.

Good luck in your training and dream big. We look forward to watching you all compete in next year's Mutton Bustin' competitions!