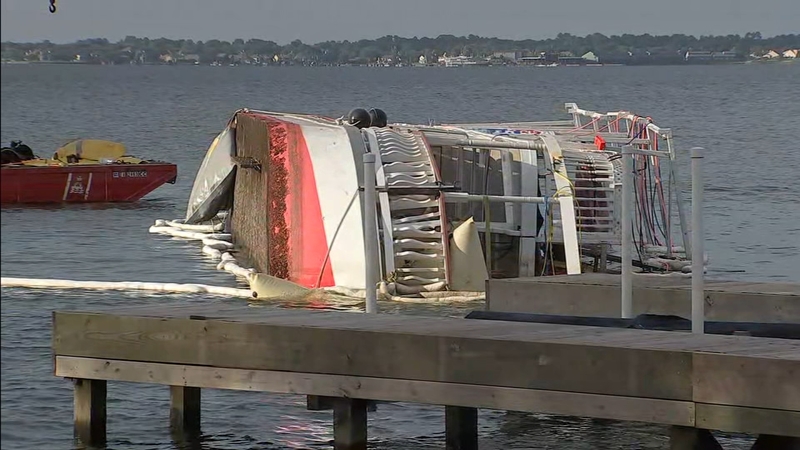 MONTGOMERY COUNTY, Texas (KTRK) -- Officials say the investigation into the deadly party boat capsize in Lake Conroe over the weekend will take some time.

A sign of this could be seen in the water Monday morning when the double decker Lake Conroe Queen remained submerged on its side some 36 hours after the disaster.

An 80-year-old man died when the vessel carrying 53 passengers and crew got caught in 4- to 5-foot waves during strong thunderstorms Saturday evening. The boat then overturned near Regency Point

The victim who died was identified as Karl Katzenberger of Montgomery, the Texas Parks and Wildlife Department said.

A woman who had a panic attack went to the hospital and her husband accompanied her.

All passengers and crew were pulled from the water and accounted for after the incident. However, passengers covered in diesel fuel from the accident were rinsed off.

Dispatch audio shed light into the chaos after the boat capsized. In the video above, hear that and accounts from rescuers and passengers.

"There's multiple people hanging onto the boat. Trying to work on them to try to get them out," a first responder can be heard saying in dispatch audio.

ABC13 talked to residents in a nearby apartment complex who were able to rescue people. Children as young as 18 months old were on the boat.


"Man, it was a pretty rough scene because the waves were five or six feet at least, and we were slowly pulling people back. And finally, the police got here, and they dove into the water and checked, and it seems like we got everybody accounted for," said Brock O'Rourke, who helped rescue people.

"I made sure the little ones were out first. There were probably more than four of them. Other than that, they were less than five years old," said Diana Elizalde, who was on the boat.


According to information from the Conroe Convention and Visitors Bureau, the Lake Conroe Queen is a 60 passenger, double-deck sternwheeler paddleboat.

A reproduction of the 1860's riverboat, the Lake Conroe Queen was built in 1986 in Grand Ledge, Michigan.