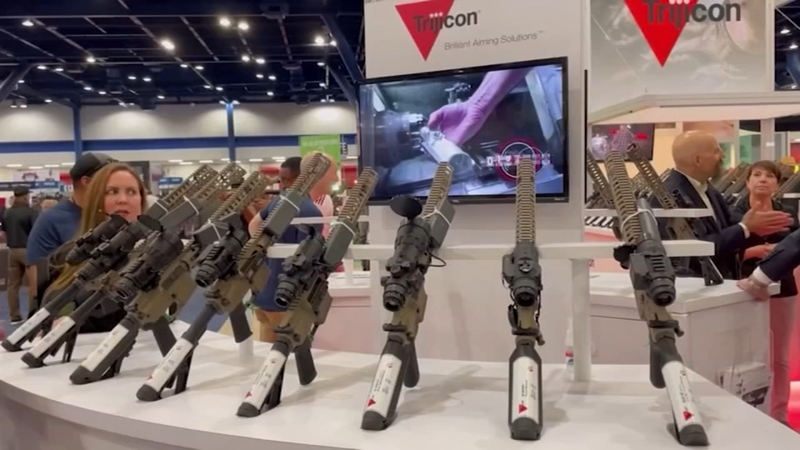 HOUSTON, Texas (KTRK) -- Both National Rifle Association Members and anti-NRA protestors traveled from across the country to be at the NRA Annual Meetings in Houston this weekend.

The annual meeting happens in the wake of the Robb Elementary School shooting in Uvalde, Texas, where a gunman unleashed a rampage earlier this week that left 19 children and two teachers dead.

James Russell is a native Houstonian who came from Atlanta to protest the event.

"I lost my dad to gun violence when I was 15 (years old) in Conroe," said Russell. "I made a special trip to come here because I just can't take anymore."

Andrew Nelson is an NRA member who traveled from Chicago to attend the NRA meetings.

"It's literally like any other consumer trade show you've been to," Nelson said. "You walk around, you check out new products."

There were fewer demonstrators outside of Discovery Green today in comparison to Friday, but more verbal sparring between those individuals and NRA members across the street at the George R. Brown Convention Center.

Individuals not credentialed to attend the NRA event are unable to enter convention center grounds, including the sidewalk outside of the facility.

"They have the right to (protest) as long as they don't incite any kind of violence or problems for people who attend the convention," said one NRA member.

The Houston Police Department and other agencies have surrounded the area this weekend, but that hasn't completely eliminated the tension between both sides.

"Law enforcement has kept everybody separate," said Nelson. "It's tense hearing the motion on the other side of the street, (but) it's understandable."

August Medrano, who is protesting against the NRA, says this is only the beginning.

On Thursday, entertainers Lee Greenwood, Don McLean, and Larry Gatlin, who were set to perform at the meeting, pulled out in light of the massacre.

Two Republican lawmakers, U.S. Rep. Dan Crenshaw and U.S. Sen. John Cornyn, both pulled out a few days ago, before the Uvalde shooting. Crenshaw is in Ukraine and Cornyn, who went to Uvalde in the wake has a scheduling conflict.

And just a few hours before convention doors opened on Friday, Texas Lt. Gov. Dan Patrick announced that "after prayerful consideration and discussion with NRA officials," he will not make an appearance at the convention.

SEE MORE: Lt. Gov. Dan Patrick drops out of speaking to NRA: 'I would not want to bring additional pain'

Former President Donald Trump's opened his speech on Friday by acknowledging the Uvalde tragedy and asked for a moment of silence as he read the names of the 21 victims.

Trump echoed Gov. Abbott's assertion that the gunman's actions were a mental health issue and not an issue with gun access.

The NRA Annual Meetings wrap up on Sunday.

SEE ALSO: NRA convention in Houston day 1: Who is attending? Who canceled? Where are the protests?
EMBED More News Videos

Attendees of the NRA convention say that they are very sorry about what happened at Uvalde, but don't know if taking away guns is the answer.