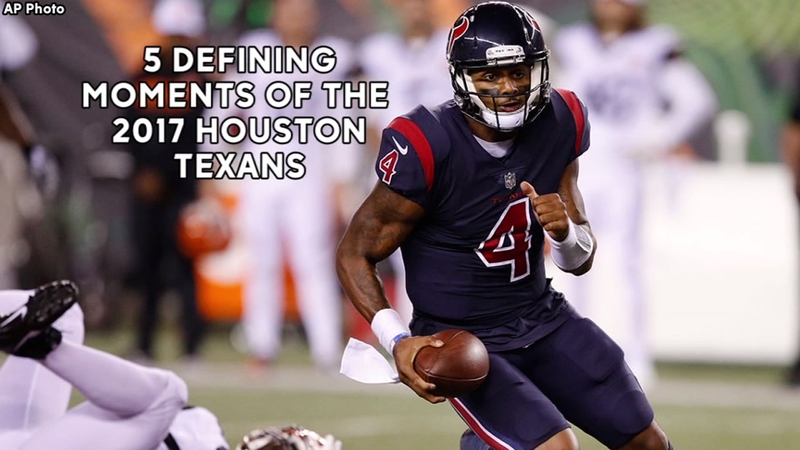 HOUSTON, Texas (KTRK) -- Let's get the obvious out of the way.

This season for the Houston Texans wasn't good, results-wise.

Between high expectations and superstar potential on the team, the Texans once again succumbed to the dreaded injury bug, which led to a sub-.500 season.

The argument can go on and on if it was too many injuries or underwhelming coaching. But, the Texans have a lot to improve on in the following year.

Beyond the record, the Texans had some redeeming qualities for the season. DeAndre Hopkins continues to solidify his status as the capable cornerstone of the franchise. Jadeveon Clowney is still a beast. And Texans fans might finally have the franchise quarterback that they have longed for.

For good and bad, here are the five defining moments of the Texans' 2017 season:

Let's start with a painless and more recent entry.

Sure, the Texans were hosting a likely AFC championship finalist in the Pittsburgh Steelers, in a lame-duck contest on Christmas Day. And, sure, the Texans had little chance to come back from a 27-0 deficit in the 4th quarter (obviously, don't tell the Patriots that).

However, the Pro Bowl wideout nicknamed "Nuk" made a crazy catch off of a 3-yard T.J. Yates touchdown toss over one defender, as he fell out of bounds. Forget the fact that the catch was tipped in the air.

How this got confirmed on the field is a miracle, but it was indeed good.

Hopkins proved to be the one-man scoring machine the Texans needed throughout the season. He led the league in receiving touchdowns with 13 this season and is just second on total receiving yards behind Antonio Brown.

Not bad for the league's highest paid wide receiver.

In a Dec. 10 home game against the 49ers, Texans QB Tom Savage took a hard hit in his own end zone. He was kept out of the game for a moment, but put back in after observation.

In slow motion, though, the image of Savage's hands tremoring while on the ground became not just a defining moment in this injury-plagued Texans season.

With the conversation shifting into possible lapses in the league's concussion protocol, the haunting image served as the face of the issue.

The NFL said the Texans followed protocol, but doctors did not see footage of Savage shaking on the field.

The league promised it has added new rules to improve the protocol based on the Savage inquiry.

Deshaun Watson, torn ACL. (Oh, we'll get to him soon.)

The Mercilus and Watt injuries both happened vs. the Chiefs. A double-whammy.

As mentioned before, it can be argued what was the main contributor to this stinker of a season: injuries or coaching. Still, injuries definitely don't help the cause.

Even a look at the Week 17 injury report is disheartening. The Texans had Jadeveon Clowney and Hopkins on the list as questionable by mid-week, and it's looking more and more likely that Nuk will miss the season finale.

Injuries happen, sure. But, dealing with them is a main indicator in the success of a team.

When it's superstars who are injured, how can anyone overcome that?

Can you believe this young man didn't start the season?

The Texans fanbase was looking for a savior under center, and the drafting of national champion QB Watson was a move in that direction.

However, no one seemed to like coach Bill O'Brien's decision to call Tom Savage's number at the start of the 2017 campaign. It was really widely panned.

RELATED: For the love of Watson: Texans quarterback is the talk of town

In just the second game of the season, Watson got his first start against the Bengals on the road. His debut might be most remembered for his 49-yard scamper to the house in the win.

We chose Watson's most defining game in the team's Oct. 1 win vs. the Titans. Against a team that may qualify for the playoffs, Watson lit up the AFC South rivals for 283 yards and five touchdowns, including a rushing score. It's worth mentioning that Watson came close to defeating the Patriots the previous week.

The outing served as a glimpse of the potential game-changing that Watson can provide for a team that has gone through the hopeless.

If there was a silver lining coming out of this season, Watson was it, despite his season-ending injury.

Taking the field after Harvey

The Texans' season debut on Sept. 10 was the first time the team ran out on the field after Hurricane Harvey lingered over Houston toward the end of August.

Their annual preseason game vs. the Dallas Cowboys was marked as cancelled on the weekend that Harvey landed.

And during that time of helplessness, J.J. Watt - the face of the franchise - became the most influential face of the city's relief. His appeal for donations to help the millions affected grew from just hundreds of thousands to tens of millions of dollars.

So when Watt stepped foot on the field inside NRG Stadium for Week 1, his presence charged up a crowd that had been looking for something to be positive for, the Astros notwithstanding, of course.

In some type of energy return, Watt, in typical J.J. fashion, waved with strength and pride the Texas flag as part of the pre-game introductions.

Watt represented not just the good of the Texans' season. He, in part, represented the best of the city of Houston in the face of tragedy.