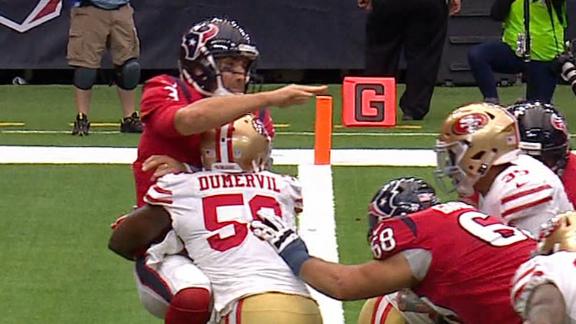 HOUSTON -- After Houston Texans quarterback Tom Savage took a hit that kept him on the ground with his hands twitching, he was allowed to re-enter the game in the 26-16 loss to the San Francisco 49ers. A series later, Savage was taken to the locker room and later ruled out with a concussion.

Texans head coach Bill O'Brien said Savage was checked immediately after the hit, but was cleared by the unaffiliated neurotrauma consultant to return to the game. After the following series, Savage was tested again and it was determined he needed to leave the game.

"Whatever [the evaluators] see and the testing that they do they try to make the best decision with the player and they weren't satisfied with the results of the second test so they decided to pull him, and that's when he went into the locker room."

Savage was hit by 49ers defensive end Elvis Dumervil while throwing an incomplete pass on third down. He appeared to have trouble getting up and seemed dazed, and his hands were visibly shaking.

Savage was checked out in the medical tent for less than three minutes, then returned to the game for one series and threw two incomplete passes. He went to the locker room with two minutes remaining in the half and was replaced by T.J. Yates.

After taking the hit, Savage spent time talking to the team's medical staff. Before the Texans' next offensive series, a team official held on to Savage's jersey and arm as he tried to go on to the field. Savage could be seen arguing with the team official before he was escorted to the locker room by the team's trainer.

That Savage was allowed back on the field at all drew the ire of Chris Nowinski, the founding CEO of the Concussion Legacy Foundation and co-director of Boston University's Center for the Study of Traumatic Encephalopathy.

On his first series, Yates led the Texans on a nine-play, 75-yard touchdown drive, throwing a 7-yard pass to wide receiver DeAndre Hopkins.

Savage returns to game after massive hit on sack
Tom Savage appears to be shaken up after taking a hard hit in the end zone. Savage goes through concussion protocol and returns for a series, but is later replaced by T.J. Yates.

O'Brien explains why Savage left the game
Texans head coach Bill O'Brien says that he leaves medical decisions in the hands of the team trainer and doctor and in QB Tom Savage's case, the pair wasn't satisfied with the outcome of their second round of testing.
Report a correction or typo
Related topics:
sportsespnseizurehandshouston texanstom savagenflconcussionsavagetwitching
Copyright © 2021 ESPN Internet Ventures. All rights reserved.
More Videos
From CNN Newsource affiliates
TOP STORIES