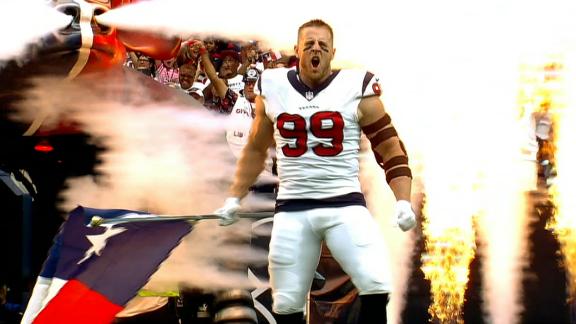 HOUSTON -- Houston Texans defensive end J.J. Watt paused at the end of the tunnel, taking in the scene as he was introduced before the Texans opened their season against the Jacksonville Jaguarson Sunday. He held the Texas flag before the team's first game at NRG Stadium since Hurricane Harvey hit Houston two weeks ago.

NRG Stadium erupted when he was announced, and Watt ran out, emphatically waving the Texas flag, getting the crowd pumped up.

Watt, who went to the locker room near the end of the second quarter with a finger injury, said after the game that he "just busted the bone through the skin. Nothing bad."

In the two weeks since Houston was hit by devastating flooding, Watt has helped raise more than $30 million for a Houston flood relief fund. After returning to Houston, Watt and his teammates have spent time visiting those affected by the hurricane and donating supplies.

Before the game, the Texans honored first responders who served during Harvey and held a moment of silence for those who lost their lives in the storm's aftermath.