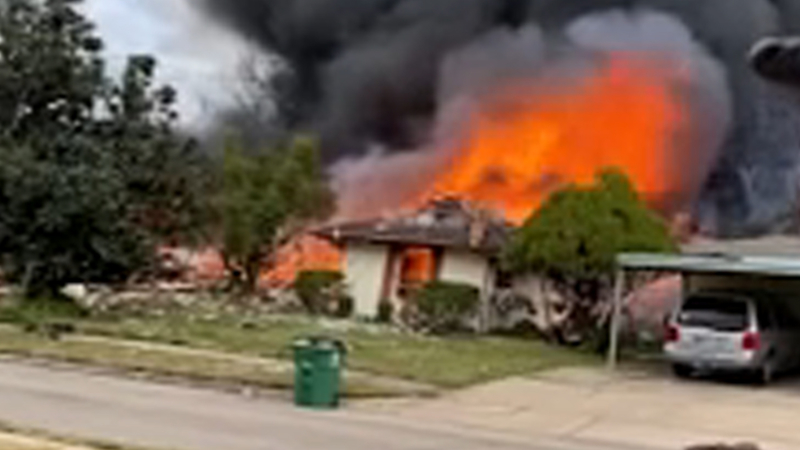 HOUSTON, Texas (KTRK) -- A gas leak inside a southeast Houston home caused a large fire which led to an explosion on Sunday morning, according to the Houston Fire Department.

It happened on Doulton Drive around 10 a.m.

About an hour later, they said the explosion occurred, lifting the house off its foundation into the air. The fire started afterward, leaving only a pile of the house's remains.

A neighbor's doorbell camera captured the flames and smoke that spread from the house.

HFD said the homeowner whose house caught on fire was able to get out before the explosion, and no other injuries were reported.

"It's an extremely fortunate scenario where no one was injured," said HFD assistant chief Mike Mire. "When you have an explosion, the pressure waves normally travel and are only blocked by the adjacent houses. It's amazing the destruction was limited to the one house."

He also said the fire spread to an adjacent house and a car parked nearby. The explosion broke windows of nearby houses and caused other minor destruction.

WATCH: 'Thought it was a bomb': A neighbor describes what she saw and heard during the explosion

"My windows blew out, I thought it was a bomb." A resident who lives near the southeast Houston home that exploded describes what she saw and heard during the blast.

The couple who lost the home had lived in it for more than 50 years. Their family set up a GoFundMe to help cover costs of the damage.

Mire also said the couple has been in touch with the American Red Cross for assistance.

CenterPoint personnel were also able to come out to contain the leak. They said the leak occurred from a two-inch pipe line, and they had to gradually work to turn it off.