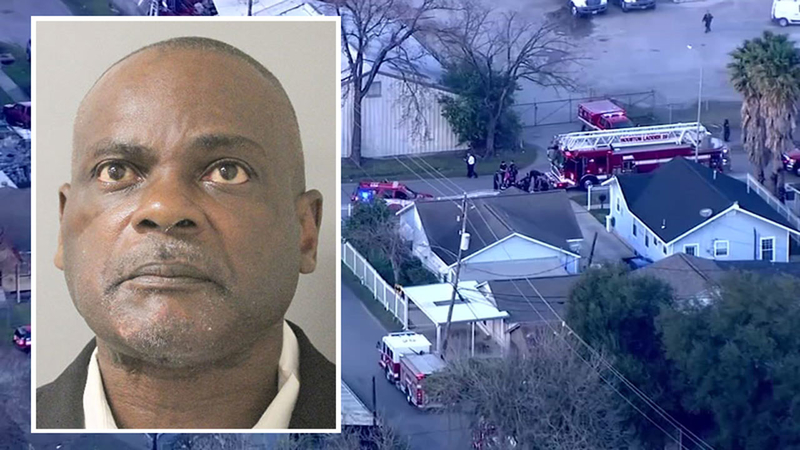 On Friday, Ogg announced charges against Goines, 54, and another former officer, Steven Bryant, 45, who was charged with a count of tampering with a government document.

Goines, a former HPD officer of 34 years is accused of lying to get a search warrant to go into the home on Harding Street in southeast Houston, where the deadly raid occurred. His actions, Ogg said, caused the deaths of Rhogena Nicholas and Dennis Tuttle.

Bryant is accused of lying to police to try to cover up the bad search warrant. Both officers retired while under investigation. Bryant had 23 years on the force.

Ogg emphasized the unprecedented nature of the case.

"This is a case like no other that we've seen," Ogg said. "It's important to the public to know that we are moving."

She later added that she hasn't seen a case like this in her more than 30 years of practicing law.

Goines and Bryant were processed and then released from the Harris County Jail after making bond; $150,000 for Goines on both felony murder charges, and $50,000 for Bryant.

Prosecutors pushed for the highest bond amount possible, calling both men "flight risks" during the hearing Friday and saying it was about public safety.

Goines was released on several conditions:

The two officers were the central focus of an investigation following the "no-knock" warrant executed on Jan. 28, 2019 on Harding Street.

The raid resulted in a shootout between a team of officers and two residents inside. The operation resulted in Nicholas and Tuttle, a married couple, both being killed. Four officers, including Goines, were wounded.

An investigation looked into whether the circumstances behind the warrant for the Harding raid was genuine. The district attorney's office also looked into thousands of narcotics cases handled by the officers. Many of them were dismissed.

In total, more than 14,000 cases were handled by the former officers' "Squad 15" of the HPD Narcotics Division.

"The family wants to know how is it that this occurred and we believe the investigation of what went wrong at the Houston Police Department must continue," Chuck Bourque, the attorney for the Nicholas family said.

After the bond hearing, where Goines was dressed in pants and a jacket and Bryant was in a T-shirt and shorts, Goines' defense attorney Nicole DeBorde questioned why the case was not taken to a grand jury first.

"No grand jury has heard the facts and circumstances of this allegation and I think that's a very important part of the process. So, I was very disappointed to see what seems to me to be a rush to judgement," said DeBorde.

Ogg said more charges are possible and that the case will be presented to a grand jury soon.

Friday afternoon, the family of Rhogena Nicholas released this statement through its attorney:
"The indictments today of former HPD Gerald Goines and Steven Bryant are important developments, but they should be only the beginning of the pursuit of justice in the police killings of Rhogena Nicholas and Dennis Tuttle.

The Nicholas family's search for the truth of what happened to Rhogena also continues. Our independent investigation is focused not only on HPD Narcotics Squad 15, but also about the conduct, pattern and practices of HPD before, during, and after the out-of-control, unjustified execution of Rhogena in her own home.

We still seek a court order for sworn depositions of HPD Captain Paul Q. Follis and HPD Lieutenant Marsha Todd, and HPD police department personnel involved in the management of HPD Narcotics Squad 15. We believe the court has sufficient basis to order the depositions requested to investigate possible wrongful death, civil rights, and other legal claims.

Finally, the Nicholas family is grateful for the work of the Harris County District Attorney's Office as well as all city, state and federal law enforcement personnel committed to a complete investigation of this terrible incident.

They remain hopeful that the justice system will succeed in helping prevent other families from ordeals like theirs."

The Houston Police Officers' Union released a statement after the district attorney's announcement, saying, in part:

"Due to the pending criminal charges, it would be inappropriate for the HPOU to provide any additional comments. ... The HPOU is pleased the District Attorney's office appears to concur with the conclusions reached by the Houston Police Department investigation that no other officers involved in any criminal activity relating to the execution of the warrant or the shooting."