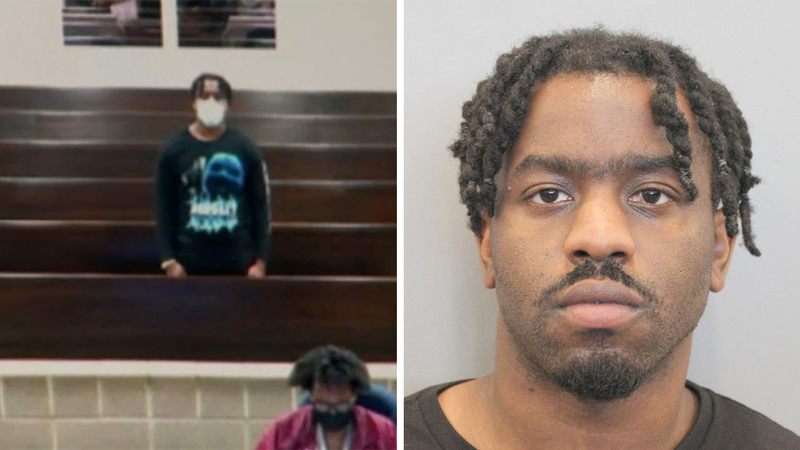 HOUSTON, Texas (KTRK) -- The man accused of shooting and killing his boss in an office building in Greenway Plaza appeared before a judge for the first time Thursday morning.

Montavius Wright, 26, is charged with first-degree murder. He's accused of shooting and killing his own boss. His bond was set at $500,000.

CHARGED: Booking photo of Montavius Terrell Wright, 26, charged with murder in Wednesday's fatal shooting of a man in an office building at 20 Greenway Plaza.

The judge set a bond supervision order, meaning if Wright bonds out of jail, he must have no contact with any family members of the victim or his coworkers, stay 500 feet away from the workplace, surrender his passport, travel only in Harris County and the surrounding area, use no illegal drugs or alcohol, possess no weapons and wear a GPS monitoring device.

The workplace shooting sparked a scare in the middle of the workday on Wednesday in the 3800 block of Cummins.

In the video above, we break down details of what went on inside the Greenway Plaza shooting after a shooting that killed a supervisor.

Video obtained by ABC13 captured Wright's arrest outside of a high-rise apartment in downtown Houston on Fannin Street Wednesday afternoon.

Investigators said Wright showed up to his work at Cedar Gate Technologies on the 10th floor of the 20 Greenway Plaza building around lunchtime with a loaded gun and allegedly shot and killed his boss.

The shooting sent panic through the building, with other employees frantically calling 911 and barricading themselves inside rooms to stay safe.

The man accused of shooting his supervisor to death inside an office building was arrested about 10 minutes away, at his apartment building.

Wright then reportedly left the building, sparking an intense manhunt to find him.

According to new details revealed in court, investigators found 9mm bullet casings around the victim, who was identified as 48-year-old Doran Kelly, after he was shot.

A witness, who is a coworker of both Wright and Kelly, said he heard the gunshot and looked outside of his cubicle and saw Wright pointing a gun. The witness said Wright told him not to say anything before he took off and fled down the stairwell.

The witness told investigators he had been Wright's coworker for about two years but didn't have any idea what his motive would have been in the shooting. Prosecutors also said the motive is still unknown.

FULL COURT APPEARANCE: Montavius Wright, 26, is charged with murder after allegedly shooting and killing his boss at Cedar Gate Technologies in the 20 Greenway Plaza building.

After Wright was arrested and taken in for an interview, police said he terminated the interview as soon as his Miranda Rights were read.

Traci Cash, who says she is a long-time friend of Doran Kelly and his wife, told ABC13 Kelly was a family man, a hard worker, and a father to two daughters.

"Matter of fact, I've never seen him mad. He was always laughing. He was just an infectious type of person," said Cash.

She says she wishes so badly Wright would have made a different choice.

"Whatever he was going through, I really hate that and I am praying for him, but this didn't have to happen," said Cash.

Other employees in the building say they were left shaken after the incident.

"I feel kind of lucky. Could you imagine being in there and not knowing? It's nuts," Chris Idol, an employee of another company in the building, said.

According to court records, Wright does not have any previous criminal records in Harris County. He is due back in court Friday.