How was Framber Valdez able to be "en fuego" in Game 5? He was, as one Twitter user pointed, "tranquilo."
KTRK 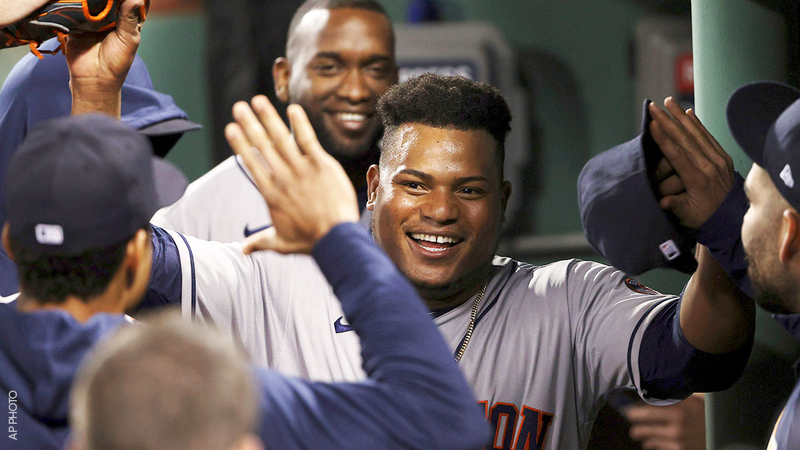 The left-handed hurler struck out five batters and allowed just three hits in a Game 5 start that Dusty Baker and company desperately needed to go beyond three innings.

So, why was Valdez able to pull off the longest outing by any starting pitcher during this postseason? It might be attributed to blocking out the distractions, especially in a hostile Fenway Park environment.

During the telecast of the ALCS game, Valdez was seen in between innings, isolated with eyes closed.

As one Twitter user pointed out, the Dominican Valdez was "tranquilo."

Granted, there were spots in the game that Valdez could have easily allowed the Red Sox to open the flood gates, especially in the fifth inning when he allowed a double and then hit a batter to put the go-ahead run on the base paths with Houston up 1-0.

"I didn't get frustrated at all. I wasn't down on myself," Valdez said. "I just worked the entire time and I had my mindset set that I was just going to come out and have a way better outing. And that's what I was able to do tonight."

The Astros are back in town and ready for Game 6. Watch their arrival overnight.

In a piece by ESPN's Joon Lee, Valdez was said to have credited his "mindfulness practices" after his less-than-stellar Game 1 start, which saw him pitch in only 2 2/3 innings.

"After he returned to the dugout following the rocky start to the fifth inning, Valdez closed his eyes and began meditating, which he turns to when he needs to mentally reset," Lee wrote. "The process, which he started with his psychologist Andy Nuñez in the Dominican Republic, helps him control his emotions and visualize the success he hopes to achieve on the mound."

And the 27-year-old pitcher stands by it, saying it's worked for him "100 percent." He was even seen shrugging off a solo home run by Boston's Rafael Devers in the seventh inning.

"My emotions don't get out of hand. I don't get in an altered state at all and I feel totally focused on what I need to do. That's something I have been working on a lot and something that really centers me and allows me to be calm out there," Valdez was quoted in Lee's article.

Valdez's practice may be just a smart part of the total mental state that his pitching staff strives for, especially in the playoffs.

Another ESPN piece, this one by Jesse Rogers, highlighted the use of the Finnish phrase "sisu," which Finland's tourism website defines as "stoic determination, hardiness, courage, bravery, willpower, tenacity and resilience." It has been something pitching coach Brent Strom has evangelized to a staff that has now skewed younger.

"I've been very blessed with the [Justin] Verlanders and the [Gerrit] Coles and the [Dallas] Keuchels and all these guys that have been there, done it," Strom said. "This is a whole new group right now, and I just asked them to dig a little deep. ... The bullpen was taxed. We were beat up a little. But they stepped up in a big way."

Whether it's actively practicing a clearance of the mind, or going headfirst into a state of mind, the Astros seem to be using those techniques to great success, proven by the fact that they are one win away from a third World Series in five seasons.

This boy's face says it all! Before the first pitch, Astros fan favorite Jose Altuve met with a boy and surprised him with some gear.

Houston and Boston fanbases know each other's rosters, but when it comes to pronouncing location names, some fans are left tongue-tied.

One reason Julie Hoff loves the Astros: she recognizes a great team when she sees one.