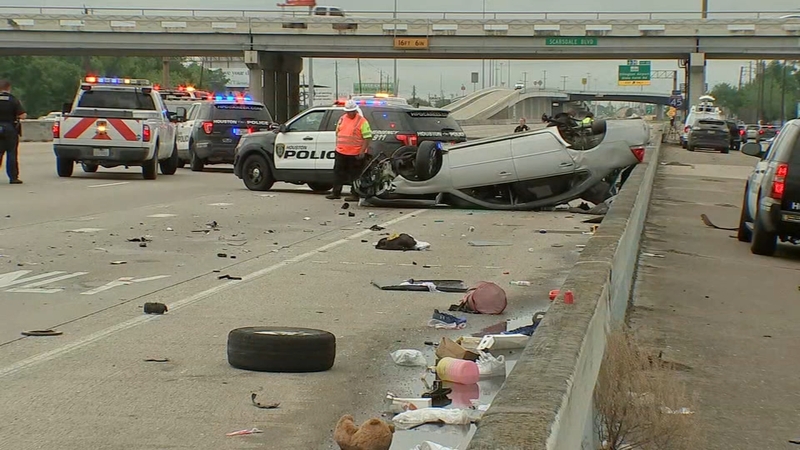 HOUSTON, Texas (KTRK) -- Police found a bag full of stolen items in a car that rolled over during a deadly crash on the Gulf Freeway early Tuesday morning.

The crash left the southbound lanes of the freeway at Scarsdale closed for over five hours, causing major delays for morning commuters.

Houston police said the driver and his passenger were traveling in a gray sedan around 4:45 a.m. when the driver made an evasive action from the third lane.

Skid marks on the freeway stretched from the third lane to the barricade. Police said the car struck the barricade before flipping multiple times.

Be prepared! All southbound lanes of I-45 at Scarsdale are closed as crews investigate the deadly wreck, causing major delays.

Video from the scene showed the car flipped upside down on the freeway.

A lieutenant at the scene told ABC13 that investigators found a credit card encoder, a number of credit cards and a bag full of stolen items, including a lot of cologne, in the wrecked car.

Financial crimes investigators were called to the scene to look at the evidence.

Witnesses told police they thought another car cut the driver off, sparking the crash, though it was unclear.

The passenger was not injured.

Police said some witnesses and the passenger worked together to pull the driver out of the flipped car. The driver was pronounced dead at the scene.

Investigators said it was unclear if alcohol or speed played a factor in the crash. It was also unknown if the driver was wearing a seatbelt.