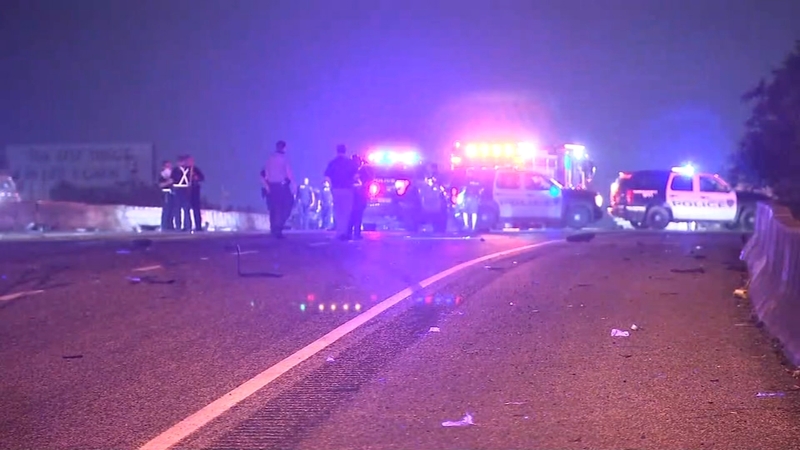 HOUSTON, Texas (KTRK) -- A speeding driver collided with multiple vehicles on a busy east Houston freeway overnight, engulfing one of the vehicles in flames and leaving at least two dead, authorities said.

It happened on I-10 East Freeway at Normandy overnight.

An officer spotted a Dodge Challenger Hellcat traveling at least 100 mph in the eastbound lanes of the freeway and tried to catch up to them, according to Houston police. By the time the officer did, the driver had collided with at least two other cars.

One of the vehicles caught fire with three people inside.

Two of those died in the crash, police said.

Four others were injured and transported to hospitals. One of those transported suffered serious burns, according to Houston police.

"We believe, that potentially, that alcohol is not a factor, but speed is going to be something that we're looking at," HPD Assistant Chief Heather Morris said.

A woman who arrived at the scene hours after it happened told ABC13 she feared the two people who died were her relatives. She said the two girls had left around 12:40 a.m. and normally take the East Freeway on their way home. It's not normal for neither to answer their phones when they're away, she said.

"I just had this feeling because I have two working chargers in my phone, so there's not reason for their phones to be dead," the woman said.

The driver of the Dodge Challenger was being questioned by police Sunday morning, but no charges had been filed.

All eastbound lanes of the freeway were closed Sunday morning as investigators worked to find out what led to the crash.

A Houston police officer spotted one of the drivers involved in the crash just before it happened. They were traveling at more than 100 mph before crashing into at least two vehicl